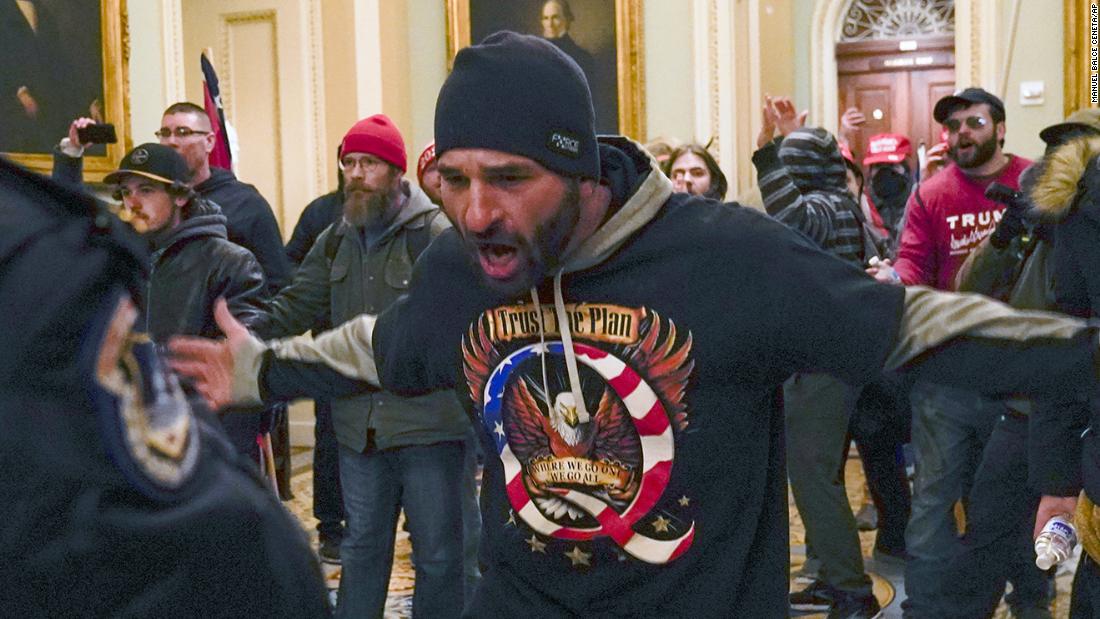 On a Twitter account with his name, Jensen identified himself twice in one of the photos circulating online after the riot and insurgency.

His neighbor in Des Moines, Iowa, also confirmed to CNN affiliate KCCI that the man in the photos was Jensen.

Jensen – in a QAnon t-shirt – is also seen in an Associated Press photo taken by photojournalist Manuel Balce Ceneta – waving to another Capitol Hill cop.

In the video captured by Igor Bobic of the Huffington Post, Jensen – wearing the same QAnon t-shirt – is seen chasing the unidentified officer with a mob of rioters following him. Once at the top of a staircase, the officer glances towards a door to his left that leads to the Senate floor and walks away and walks towards the camera, pulling the crowds away from the Senate floor.

Jensen posted on Twitter on Nov. 12 that he was “ready for 4 more years” and “will do whatever it takes.”

Jensen, 41, was arrested for his involvement in a violent mob breaking into the Capitol, according to the FBI and local Iowa officials. Local authorities were not called to assist in the arrest, and FBI officials presented Jensen to Polk County Jail for treatment on Saturday. He was put in jail at around 1 a.m. central time.

According to the FBI and the Polk County Sheriff’s Office, Jensen faces five federal charges: Illegal entry into the Capitol, disruption of government affairs, violent entry, marching through a Capitol building and blocking law enforcement during the riot.

CNN also contacted Polk County Jail to try to contact an attorney for Jensen, and they turned to federal authorities. No further information on Jensen’s case was available at the time of the Justice Department’s release.

KCCI said Jensen has since been fired from his job at Forrest & Associate Masonry. Company chairman and chief executive Richard Felice told the station the company disagreed with Jensen’s actions.

Kristin Wilson contributed to this story.