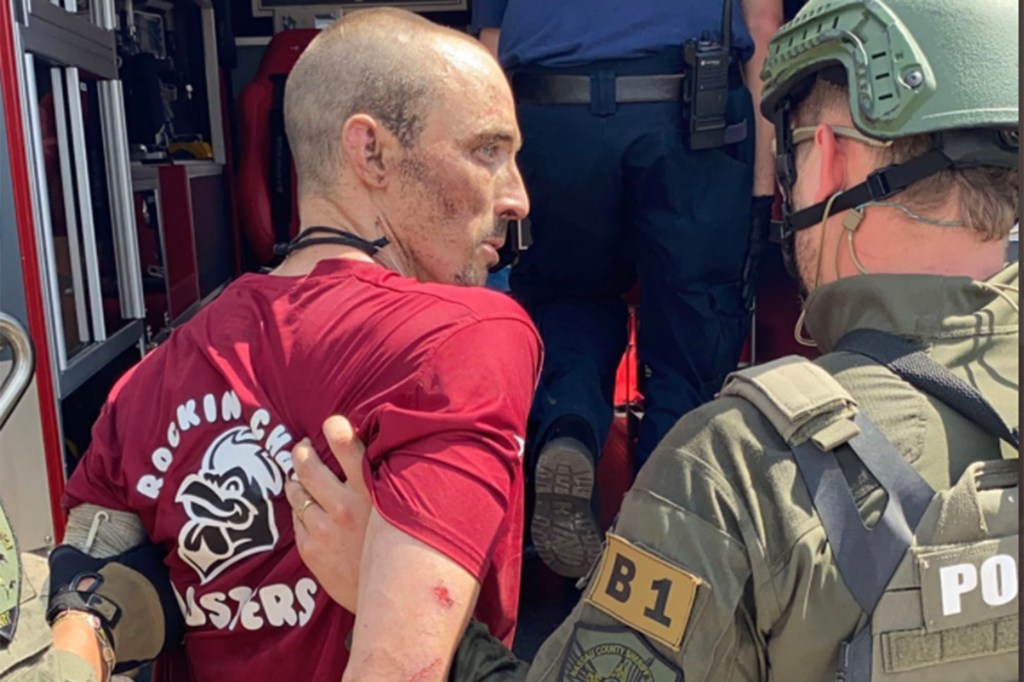 Florida police arrested an ex-Marine in the murder of a sheriff’s deputy – but the sheriff lamented that the cops never had a “chance” to shoot the fugitive.

“I’ll just say I wish he had given us the opportunity to shoot him, but he didn’t, he crawled like a coward,” Leeper said at a press conference. “He’s in custody and he’s going to pay for what he did for the Moyers deputies.”

McDowell is accused of shooting Moyers twice during a traffic stop on Friday, then going on the run – triggering a five-day manhunt where he escaped capture by shooting a dog police officer.

Authorities chasing McDowell shot the fugitive, hitting him in the leg and grazing his head, the sheriff said.

Police finally caught up with McDowell on Tuesday, with advice he was trying to get help with his injuries without going to a hospital where he feared he would be detected.

They surrounded a concession stand and a bathroom, which McDowell said he wanted to go.

“He came out of the toilet,” Leeper said. “He had made her lie down on the ground and crawl. He was crawling like a baby, like the coward he is.

A police dog attacked him in the arms after the sheriff said McDowell had not “fully cooperated” with the SWAT team’s commands.

Authorities handcuffed McDowell using Moyers handcuffsLeeper added. There are people the cops believe have helped McDowell avoid the police in recent days, and the sheriff has said more arrests could be made in connection with the massive manhunt.

McDowell’s father Richard was “glad no one else was hurt,” he told News 4 Jax. The father previously told First-Coast News that his son had returned from Iraq and suffered from mental health and addiction issues.

Moyers arrested what turned out to be a stolen car early on Friday morning. A driver, who police said was McDowell, opened fire and then fled through the train tracks. Moyers, who died two days later, was 29 years old and was planning a wedding.