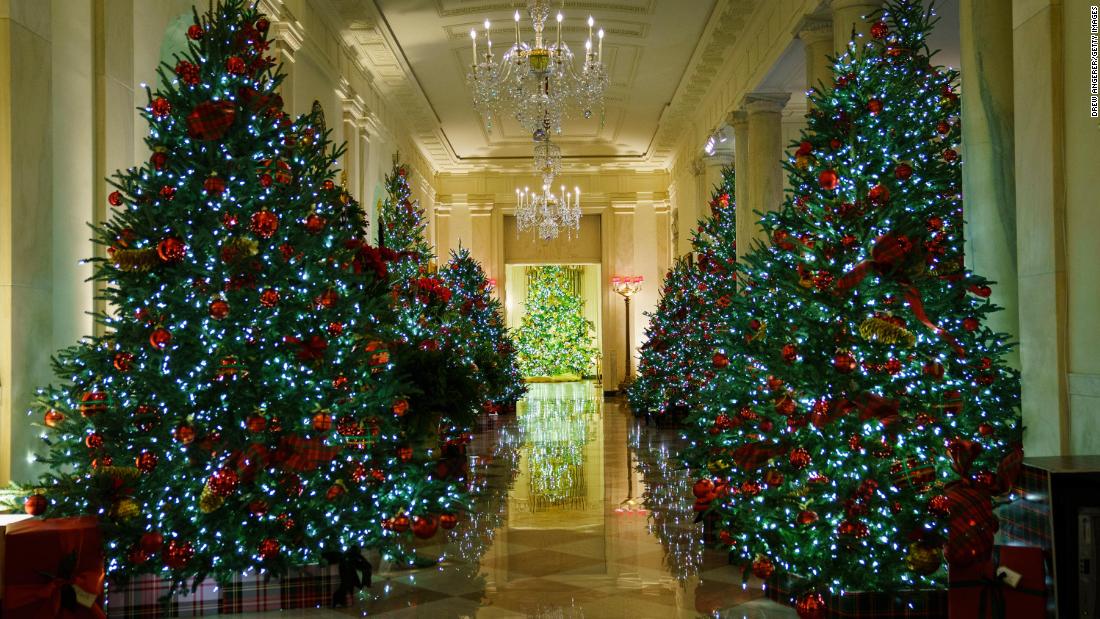 Highlights of this year’s exhibit – coming during a global pandemic – include a tribute to essential Red Room workers, including a lighted ceramic post office and a tree with ornaments celebrating frontline workers , including a garbage truck, scientist, caregiver, lab coat and nurse’s hat.

“We salute America’s everyday heroes who serve as first responders and frontline workers. The handmade ornaments showcase the many professionals and volunteers who serve their communities with a spirit of generosity,” according to the office of first lady Melania Trump.

The First Lady and President Donald Trump are expected to host a series of holiday celebrations with some security measures in place despite the worsening pandemic.

While former friend and advisor to Melania Trump, Stephanie Winston Wolkoff, recently released the audio of the first lady asking, “Who’s giving the fuck about Christmas?” the East Wing said she personally oversaw the set this year.

“Ms. Trump has personally selected every detail of the White House holiday season, celebrating this land we are all proud to call home,” the first lady’s office said.

Considerable thought and detail has been put into the Americana decorations.

In addition to honoring frontline workers, there is a Kennedy-themed tree in the Vermeil Room, with adornments depicting an iconic portrait of President John F. Kennedy and sailboats. The tree sits next to the portrait of former First Lady Jacqueline Kennedy.

“To preserve the White House for the American people, First Lady Jacqueline Kennedy established the ‘House of the People’ as a living museum and laid the groundwork for expanding the diversity of the collection. Sharing this love for the arts and culture, President John F. Kennedy’s official portrait is featured on graceful trees, ”Melania Trump’s office said.

A tree in the library marks the 100th anniversary of the 19th Amendment with a base featuring images of women’s suffrage designed by children in a Trump-led artwork competition. Another tree in this room features women who were “pioneers for gender equality,” the first lady’s office said, including artist Georgia O’Keeffe and aviator Harriet Quimby.

The eastern colonnade, which featured controversial red trees covered in cranberries from The Handmaid’s Tale in 2018, this year features large black urns with foliage and greenery from each state and territory, according to the first lady’s office. .

The official tree, an 18.5-foot Fraser fir from West Virginia welcomed by the first lady last week, is decorated in the Blue Room with ornaments of artwork from children of the country.

The rose garden is presented with the White House Gingerbread for the first time this year, by the East Wing.

The East Room features planes, trains and automobiles, with planes and spaceships hanging from the greenery reflected in a large mirror and a “White House Express” train.

And this year the China Room offers a warm cuisine with cookies and pastries on a dining table, stockings embroidered with “POTUS”, “FLOTUS” and “Barron” hanging from a fireplace mantle.

Riley Williams: Woman accused of being involved in theft of Pelosi laptop during riot on Capitol Hill discharged home

President Biden to mandate masks on planes: will it reduce the number of in-flight mockers? – USA TODAY