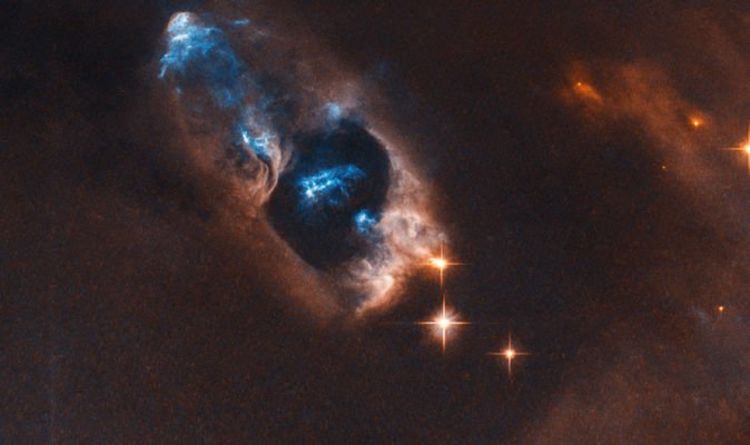 The beautiful image was taken by NASA's Hubble Telescope and shows the main ingredients of a star that is beginning to come together. The star in formation, known as the nebula, is only 1,000 light-years away from Earth and represents the birth of a young star. One can see a multitude of dusts and gases on the image, and NASA says they're colliding and twirling at a speed of 150,000 km / h.

The newborn star is known as SVS 13 and stands amidst Herbig-Haro objects.

The space agency explains: "Herbig – Haro objects are formed when jets of ionized gas ejected by a young star collide at a very high speed with clouds of gas and dust.

"The Herbig-Haro objects visible in this image are no exception to the rule and were formed when the throws of the new SVS 13 star collided with the surrounding clouds.

"These collisions created the five bright blocks of light in the reflective nebula."

The Hubble telescope is expected to retire in 2021, after which the more powerful James Webb Space Telescope (JWST) will take over.

JWST is so powerful that the Hubble telescope will look like a pair of binoculars, say the fans.

The infrared machine is so powerful that it will reach the most distant realms and the first moments of the universe.

And the JWST has the ability to analyze thousands of planets in search of a foreign life, even if these planets are thousands of light-years away.

One of the major differences between Hubble and JWST will be how long it will be able to see.

Hubble can see far into space and look essentially in time as the light moves towards the craft.

Thanks to Hubble, experts were able to observe the formation of the first galaxies, about a billion years after the Big Bang.

However, as JWST is much more powerful, it will only be able to see 0.3 billion years after the Big Bang until visible light begins to form.