NASA's InSight mission landed on the surface of Mars on Monday around 3 pm Eastern Time, successfully completing a journey of over 480 million kilometers over six and a half months. The InSight lander, the domestic exploration using seismic surveys, geodesy and heat transport, is the first mission to land on Mars since the Curiosity rover in 2011, and the eighth successful landing of an unmanned spaceship on the planet. This is the beginning of the largest geological study on a celestial body located beyond the Earth.

The first two images of InSight, both confirming that the mission has successfully landed and transmit data from the Martian surface. NASA / JPL-Caltech

At the time of writing, all probe systems are working as intended. Two first photos have been sent from the surface of Mars, confirming that it is on the ground, that solar panels have been deployed and that it is in contact with the fleet of spacecraft in orbit around Mars. His weather suite and magnetometer have been deployed, while his robotic arm equipped with a camera will be deployed in the coming days.

The main instruments of the mission will be online during the next three months. This includes a seismometer to study Marsquakes (tectonic activity on Mars) and a radio science experiment that will calculate the size and rotation of the Mars core and mantle. InSight also needs to dig five meters into the surface, deeper than any previous study, and install heat sensors every ten centimeters to see the evolution of heat flux inside the planet.

These instruments are designed to collect data for the next two years at least, to better understand the internal structure and geology of the red planet. This, in turn, will be integrated with the more general knowledge of humanity on the formation of rocky worlds, from the Earth to the Moon, through the exoplanets such as those of the Trappist-1 system. All this for only $ 830 million, less than the cost of one of the nearly two dozen B-2 stealth bombers of the US military.

InSight's design builds heavily on the success of Mars Phoenix Lander, which completed its mission in 2008. They have a similar solar panel and general spacecraft design, although InSight is designed to last more than four times longer than its predecessor. InSight also has cameras similar to Spirit, Opportunity and Curiosity, reusing technologies that have proven robust and have provided a large volume of scientific information.

An artistic InSight lander design on the surface of Mars with his seismometer (left) and his thermal probe (right) deployed. Credit: NASA / JPL-Caltech

Like all missions on Mars, InSight would not have been possible without a high level of painstakingly planned international coordination involving hundreds of researchers and engineers. The main instrument of InSight for the study of the Martian interior, the seismic experience for interior structure, was developed thanks to the coordinated efforts of engineers in France, Germany, Switzerland, the United Kingdom and in the USA. The probe used to measure heat flux five meters below the surface of Mars was manufactured in Germany and Poland, its meteorological station in Spain and its laser reflector, which will be used for precision measurements of longitude, latitude and altitude. Italy. The experience of mapping the inner structure of Mars and measuring its rotation has been developed in the United States. Even the launch of the mission and the operation of the spacecraft while he was heading to Mars required the cooperation of scientists in Australia, Spain and the United States.

InSight has arrived at the Elysium Planitia, a vast expanse of ancient Martian lava located near the equator of the planet. Although the geology and chemistry of the area are interesting, the site was chosen more for the ease of landing and the large amount of sunlight than for its surface features. The solar panels that provide the undercarriage with the energy needed for all its communications equipment and scientific instruments produce between 600 and 700 watts on a clear day, less than a microwave oven.

Coincidentally, InSight is relatively close to Curiosity, about 600 kilometers north of the rover's position in Gale Crater. Traveling at full speed would take 3,000 days at Curiosity, just under eight and a half years to reach InSight. They are currently the two closest synthetic objects on the surface of Mars.

As with all gear that enters orbit and / or lands on Mars, the final approach to InSight on the planet is automatically done. It takes less than seven minutes for the aircraft to land on the surface, but fourteen minutes for signals to be relayed from Mars to Earth. Because of the distance, there could be no human surveillance since the LG entered the atmosphere, deployed its parachutes, chose the exact location to land, fired its propulsors from the aircraft. Landing and touched the ground gently. Dozens of operations and thousands of lines of code have been preprogrammed into the machines and the spacecraft 's memory and according to all the reports they have performed perfectly.

The InSight landing was also a test for Mars Cube One (MarCO), an overview of two miniaturized and inexpensive satellites, called CubeSats, used to relay InSight telemetry on Earth at the time. Entry, descent and landing of the spacecraft, in the form of radio signals directly from InSight. on Earth were blocked by Mars itself. Normally, this relay is performed using existing spacecraft, such as Mars Odyssey and Mars Reconnaissance Orbiter from NASA or Mars Express from the European Space Agency. Instead, the InSight team used MarCO A and B to test the much smaller and cheaper communication technologies provided by CubeSats, which successfully relayed critical data throughout the process and for eight minutes thereafter . 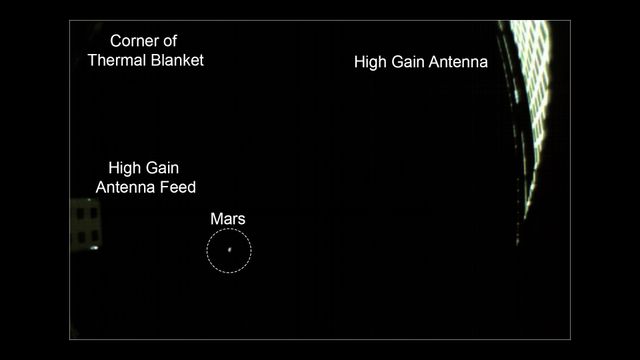 An image of Mars taken by MarCO-B two days before InSight landed. Even after completing 99.8% of its journey, Mars has only three pixels to reach both CubeSats. Credit: NASA / JPL-Caltech

Future missions in the deep space should now adopt more and more this technology. It has been shown that CubeSats is an efficient and cost-effective way for a spacecraft to relay information on the Earth without the need to already have a craft already orbiting a celestial body. or to use the energy of the main mission to send information all the way down the Earth. it enters orbit or lands. They have the potential to reduce mission costs and provide a new platform for scientific observations.

This latest successful mission to Mars is a welcome demonstration of the power of human foresight and scientific planning, in the face of the promotion of irrationalism and anti-scientific bias on the part of the political right and the pseudo- left.

To fight against this blacklist: