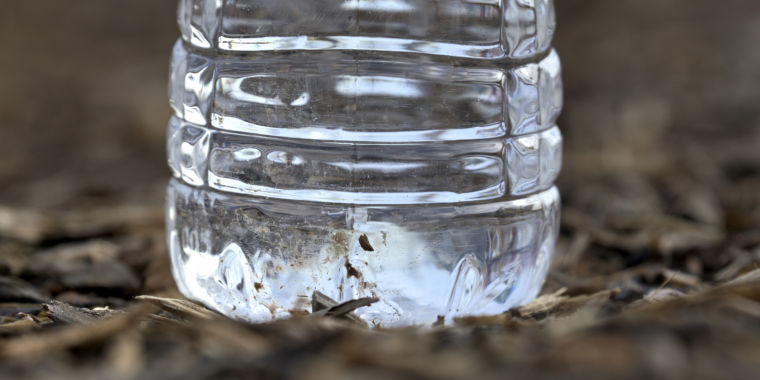 According to a survey conducted by Consumer Reports, several brands of bottled water contain significant levels of arsenic contamination.

The worst offenders in the report were Starkey, a brand owned by Whole Foods and marketed under the label "water in the natural state", and Peñafiel, which belongs to Keurig Dr. Pepper and is imported from Mexico.

The Peñafiel samples tested by CR had arsenic levels of 18.1 parts per billion on average, well above the 10ppb limit allowed by the Federal Government by the Food and Drug Administration. Whole Foods' Starkey water test showed concentrations equal to or slightly lower than the federal limits, with results ranging from 9.48 ppb to 10.1 ppb.

Arsenic is a trace mineral in rocks and sediments and can contaminate groundwater from natural or man-made sources, such as mining and runoff from agricultural and industrial sources. According to the Centers for Disease Control and Prevention, long-term exposure to high levels of arsenic is associated with skin disorders and increased risks of certain cancers, diabetes, and hypertension. Some studies have also established a link between arsenic and impaired intellectual development after early exposure.

In response to CR's findings, Keurig Dr. Pepper announced that he had suspended bottled water production at his Mexico City plant and that he would improve filtration. Whole Foods, for its part, reported that it performed its own tests on batches of water tested by CR and determined that the levels were acceptable. The company's test results "show that these products are fully compliant with FDA standards for heavy metals," Whole Foods told CR in a statement. He added that he was testing "every cycle of water production before it was sold" and that the company "would never sell products that do not meet FDA requirements."

Yet this is not the first time that Starkey Water has encountered arsenic problems. Between late 2016 and early 2017, Starkey recalled 2,000 cases of water exceeding arsenic levels above the federal threshold.

In addition, public health experts and researchers believe that the federal threshold is too high. As such, some states have defined different standards for arsenic for their water. In New Jersey, for example, set the maximum allowable level of arsenic in tap water at 5 ppb. But the Garden State still meets the federal limit of 10 ppb for bottled water.

One of the reasons for keeping the levels low in the water is that the water is only one source of exposure to arsenic in daily life. As a natural element in the soil, it can be found in plants, air and food. Advocates also expressed concern over arsenic levels in fruit juices and rice-based baby foods. (Rice plants are particularly effective at sucking arsenic and other elements, such as mercury, soils.)

Given its natural sources, it can sometimes be difficult to avoid arsenic – but, in the eyes of critics, the bottled water industry, of value billions of dollars in the United States, is not a part of it.

"With bottled water, why should you have arsenic in the water?" Asked CR Ana Navas-Acien, professor of Environmental Health Sciences at the Mailman School of Public Health of Columbia University. "There should be a lot of treatment and remediation possibilities."