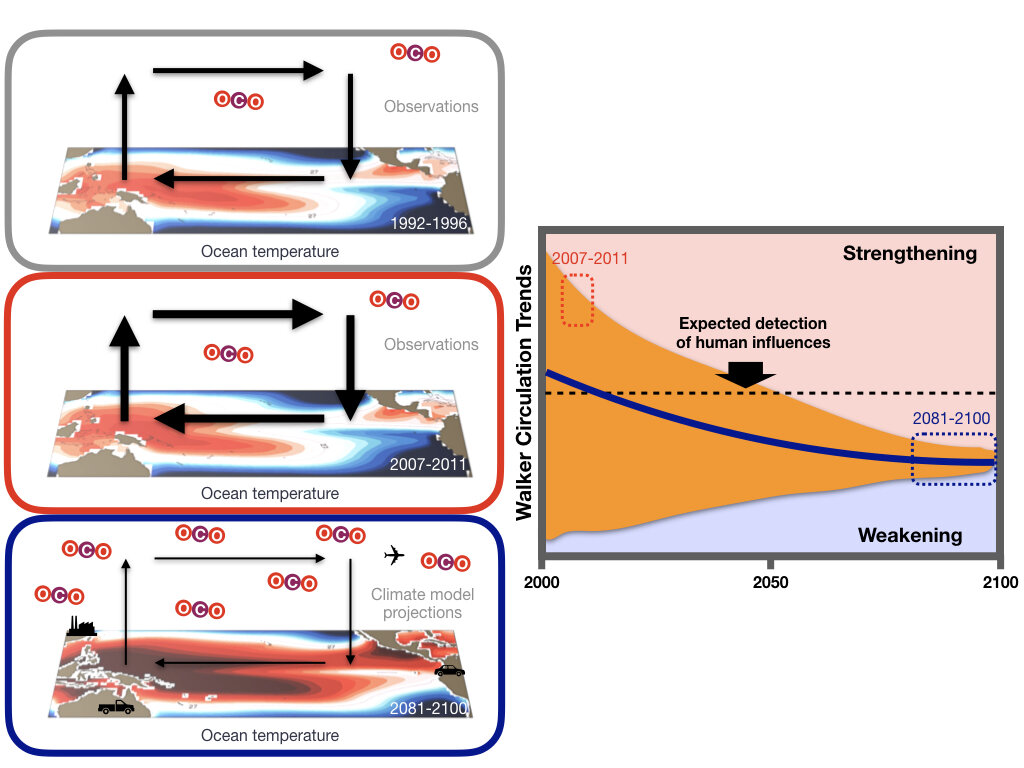 A new study, published this week in the journal Nature Climate change, shows that the recent intensification of the equatorial Pacific wind system, known as Walker Circulation, is not related to human influences and can be explained by natural processes. This results in a long-standing debate over the factors of an unprecedented atmospheric trend, which has contributed to a triple acceleration of sea-level rise in the western tropical Pacific, as well as a slowdown in global warming .

Driven by the difference in surface temperature of the east-west sea across the equatorial Pacific, Walker's circulation is one of the key elements of global atmospheric circulation. It is characterized by an upward movement on the western Pacific and a downward movement in the eastern equatorial Pacific. On the surface, the trade winds blow from east to west, causing a rise in cold water along the equator. Between the early 1990s and around 2013, this circulation intensified dramatically, cooling the eastern equatorial Pacific and causing changes in global winds and precipitation (see Figure 1). These conditions have further contributed to drying up in California, exacerbating drought conditions and impacting on agriculture, water resources and forest fires. Given these widespread impacts on ecosystems and society, recent trends in Walker's circulation have become a subject of intense research.

In contrast to the observed enhancement, the majority of computer models of climate simulate a progressive weakening of Walker's circulation when forced by increasing concentrations of greenhouse gases (see Figure 1). "The divergence between climate model projections and observed trends has led to speculation about the fidelity of the current generation of climate models and their portrayal of tropical climate processes," said Eui-Seok Chung, researcher at the Center for Climate Physics. , Institute for Basic. Science, South Korea and lead author of the study.

To determine whether the changes observed in the tropical atmospheric circulation are due to natural climate processes or caused by man-made climate change, scientists from South Korea, the United States and Germany met to conduct one of the most comprehensive analyzes from large data. recent atmospheric trends to date. "Using satellite data, improved surface observations, and a broad set of climate model simulations, our results demonstrate that natural variability, not anthropogenic effects, was responsible for the recent enhancement of Walker's circulation," he said. Professor Axel Timmermann, Director of the Center. IBS Center for Climate Physics of the National University of Pusan ​​and co-author of this study.

In their integrated analysis, the researchers found that the enhancement of Walker satellite traffic was much lower than was assumed by other surface observations used in previous studies. "Putting surface observations in context with the latest satellite products was a key part of our study," said co-author, Lei Shi, of NOAA's National Environmental Information Centers. in the USA.

By analyzing 61 computed computer model simulations with increasing concentrations of greenhouse gases, the authors showed that, although the average response weakens Walker's circulation, there are significant differences between individual model experiments, particularly when looking at short-term trends. "We found that some models even matched the changes observed in the tropical Pacific, in contrast to other computer experiments showing a more persistent weakening of Walker's circulation during the observation period," said the co-director. – author, Viju John of EUMETSAT. in Germany. The authors were able to distinguish the cause of propagation in computer model simulations.

Professor Kyung-Ja Ha, co-author of the IBS Climate Physics Center and the National University of Pusan, said: "The natural variability of the climate, associated for example with the influence of climate change. El Niño-Southern oscillation or intercalary oscillation of the Pacific, may play an important role diversity simulated climatic trends. "

Brian Soden, a professor at the Rosenstiel School of Marine and Atmospheric Sciences at the University of Miami, USA, said, "The observed trends are not unusual." In climate model simulations, we can always find shorter periods of several decades, show trends similar to those derived from satellite data, but in most cases, and when we take into account the global warming reaction at the scale of the century. these tendencies end up being reversed. "

The study concludes that the observed enhancement of Walker's circulation from around 1990 to 2013 and its impact on the level of the Western Pacific Sea, the cooling of it and the drought in the south-west the United States was a natural phenomenon that does not contrast with the notion of projected anthropogenic climate change. Given the high levels of ten-year natural variability in the tropical Pacific, it would take at least two more decades to unambiguously detect the human footprint on Pacific Walker Circulation (see Figure 1, bottom right).

Provided by
Institute of Basic Sciences