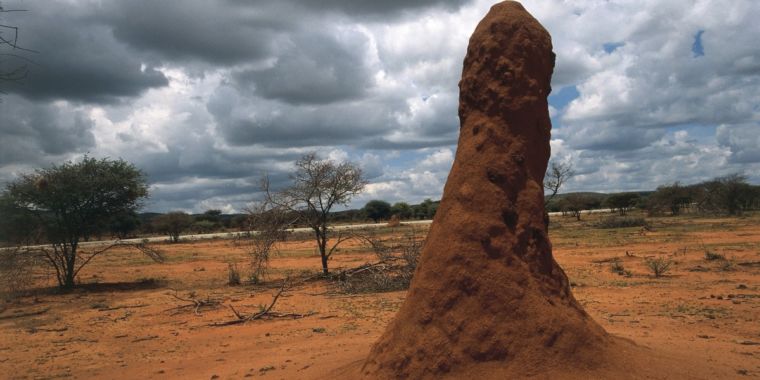 Visit the African savannas in Zimbabwe or Namibia, and you might notice large, towering termite mounds dotted about the landscape-nature's skyscrapers, if you will. And nature is quite the engineer: those mounds are self-cooling, self-ventilating, and self-draining. New 3D X-ray images have been revealed to the world of the world. Science Advances.

Termite mounds, with their ingenious mechanisms for climate control, have been providing for architectural design for at least the last 20 years, most notably when Zimbabwean architect Mick Pearce based his design for the Eastgate Center in his nation's capital of Harare on the termite mounds he observed in the region. He wanted to move away from the big glass block designs previously favored for office buildings and wanted his design to be heated and cooled by natural means. The Eastgate Center is the largest commercial and shopping complex, and yet it uses less than 10 percent of the energy consumed by its size, because there is no central heating system.

The termite mounds are basically fungus farms, since they are the termites' primary food source. Conditions have to be right in order for fungus to flourish. So the termites must maintain a constant temperature of 87 ° F in an environment where the outdoor temperatures range from 35 ° F to night to 104 ° F during the day. Swiss entomologist Martin Lüscher suggests that the termite mounds worked a bit like air conditioning. Hot air in the nest below while air cooler down, aided by the height of the mounts. The termites construct tunnels that act a bit like heating and cooling winds, which can be opened and closed as needed over the course of the day.

The Eastgate Building is related to a similar system of well-places within ductwork, clusters of tall heat-exchanging chimneys, and solar panels. "The ducts would be channel through the building, while the chimneys would siphon heat from the bustling occupants and machinery during the day," Lee Billings wrote at Nautilus in 2013.

And it worked-but not for the reason everyone thought. Biologist J. Scott Turner of the State University of New York. He checked the interior temperature and humidity of termite mounds, and he even filled the tunnels of sample mounds with plaster, slicing off thin layers to create a cross-sectional map of the interiors.

Turner found that the assumptions of Pearce and others that the mounds' complex tunnel systems are not accurate. The air mixing is not the result of the colony's internal heat. The termites build the mounds so tall to catch the wind, and their porous outer surface is what allows the air to move into and through the colony. Turner likens the effect to the alveoli in human lungs: the mound almost "breathes."

As for Pearce's Eastgate Center design, it works for its ductwork and chimneys, but because of the foundational concrete slabs acted as heat sinks, storing thermal energy during the day and releasing it during the cooler night.

This new study sheds a bit more light on that porous outer surface. An interdisciplinary team of scientists from Imperial College London, the University of Nottingham, and CNRS-Toulouse conducted an X-ray scan of several termites from Senegal and Guinea to measure the walls and corridors. This method is used to calculate the thickness of the inner and outer walls and to determine the structure of the term. They discovered the walls of both large and small micro-pores to aid in ventilation.

Next, they used 3D flow simulations to demonstrate how the micro-pores form a fully connected network. The larger micro-pores are most effective when blowing faster, winding pent-up CO2 in the nest. In less windy conditions, the pores are still able to move CO2 through the nest, venting it via broadcast. Those larger micro-pores in the outer wall also help regulate the internal temperature by air, much like double-glazed windows trap heat inside. As for drainage, water can block the pores during rainy conditions. Purpose capillary action can essentially move water from the larger pores to the smaller micro-pores, removing the blockage.

"The findings are a much better understanding of how architectural design can help control ventilation, heat regulation, and drainage of structures-maybe even in human dwellings," said co-author Pierre Degond of Imperial College London. "They also provide a new direction for the future of energy efficient self-sustaining buildings."