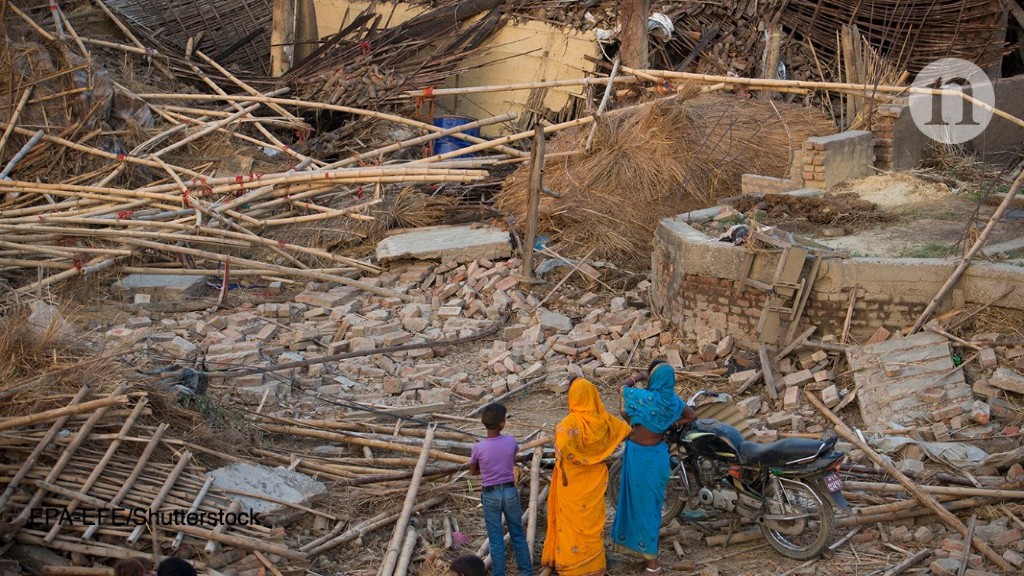 According to researchers, a deadly storm that devastated Nepal almost two weeks ago is the first tornado ever recorded in the country. A team identified the extremely rare event in southeastern Nepal without the help of conventional tornado detection instruments. It's based on satellite images, analysis of social media publications and a visit to the affected area.

According to the government, 28 people died and more than 1,100 were injured in the March 31st storm, which also damaged around 2,600 buildings and a World Heritage National Park.

The damage caused by the storm surprised many meteorologists. A team of researchers from The Small Earth Nepal and the country's Department of Hydrology and Meteorology launched an investigation into the nature of the storm the day after it was triggered.

Windstorms and thunderstorms are common in the months leading up to the monsoon from March to May, says Archana Shrestha, Meteorologist at DHM Kathmandu. But she suspected that something unusual had happened after hearing accounts of the locals on whirling winds. The swirling and violent air funnels that follow a path are characteristic of tornadoes, she says.

Nepal does not have the scientific infrastructure needed to easily identify a tornado, Shrestha said.

In countries such as the United States, hit each year by some 1,200 tornadoes, these rotating wind columns are identified with the help of Doppler radar images, says Leigh Orf, a research scientist. atmosphere at the University of Wisconsin – Madison.

To determine if the storm was actually a tornado, the Nepalese research team analyzed high-resolution images of the pair of European Sentinel-2 Earth observation satellites, taken before and after the storm. ;event. The researchers also looked at social media publications and plotted them on Google Maps using geolocation data from the publications or locations mentioned in the text. During a four-day visit to the affected cities, they measured the damage caused by the storm and the distance traveled by the debris. The team also collected surveillance images of the storm.

The researchers discovered a destruction trajectory traced by the 90 km long tornado. The trail started at Chitwan National Park, near the Indian border, and crashed through homes, underground water pumps and power lines. Researchers estimate that the tornado has reached a wind speed between 180 and 330 km / h.

Residents reported seeing a funnel-shaped vertical structure spreading clouds on the ground, which made it possible to lift anything that ran through it, according to a government report by Piyush Dahal, coordinator of the research at The Small Earth Nepal in Kathmandu. The images also show trees and corrugated iron that have been bent and deformed. The researchers will submit a full report of their investigation to the government next week.

"Looking at this satellite image, it's clear that it's a tornado – no other atmospheric phenomenon produces this type of damage," Orf said. "The damage on the ground seems to correspond to a weak to moderately strong tornado."

Tornadoes are usually formed by storms called supercells, which are usually not found in Nepal, he added.

Some scientists are not surprised to see a tornado in Nepal. Hirohiko Ishikawa, a meteorologist at the Institute for Disaster Prevention Research at Kyoto University in Uji, Japan, says the Ganges basin in Bangladesh, southeast of the storm, has frequent tornadoes. Some cases have been reported in north-east India. It is possible that the plains of southeastern Nepal have already been hit by unregistered small tornadoes, he said.

The Nepalese government is improving its weather instruments and has installed a radar in western Nepal, which is still in the testing phase, said Shrestha. Two others are planned for the central and eastern regions. A weather balloon to measure vertical atmospheric conditions is also under test. But Pradhananga says more resources are needed to study extreme weather events in the country.

"The government needs to create a separate unit to conduct research, not only on tornadoes, but also on other water-related disasters, such as floods, drought and heavy rains," he said. declared.

Stay abreast of what matters in science and why, chosen by hand Nature and other publications around the world.