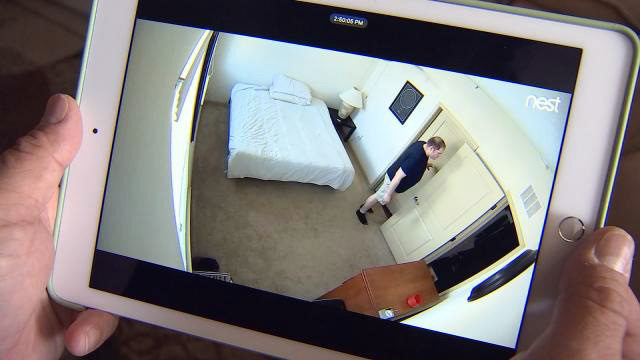 "Nobody wants to see this": the man says that someone was watching him through his Nest camera

KISSIMMEE, Fla. – A man from Kissimmee said that he was performing his morning routine when he came out of the bathroom of his apartment and realized that his Nest security camera was on.

Adam King then heard a voice that he did not recognize.

"The light went on and caught my eye, and I think he said," Nobody wants to see that, "said King." He had an accent, he did a reshuffle microphone. When I left the room, music or sounds were heard. "

King said that someone used a computer or cell phone to monitor him via the Nest app.

He claimed to have entered his living room to look for his cell phone or iPad so he could turn off the camera, but he could not because the other person had control of the application.

"I had no choice but to immediately get back inside and unplug the camera," King said.

Nest, owned by Google, provided 9 Investigates with the following statement:

.@DJonesWFTV is studying how to protect your home surveillance system from hackers, TODAY at 5am on #wftv. @GWarmothWFTV @MarthaSugalski pic.twitter.com/FK3JjgC3cZ

Jason Cook, head of cybercrime at the Florida Law Enforcement Department, said that it was important to use a secure network.

"It's your thermostat – it's your home surveillance system, your washer and dryer, Wi-Fi, a controlled outlet sometimes," he said. "They all work on your network, and if your network is not secure, all of these are vulnerable."

Nest told 9 Investigates that it encourages users to use its two-layer authentication process.

King said that he no longer wanted to put his privacy in jeopardy.

"I do not want to put my camera back against the wall lest it be hacked again," he said.

The company spokesperson would not estimate how many customers have experienced similar problems.

Not near a TV? Click here to watch WFTV Live Newscasts