New microfluidic device can detect cancer cells in the blood 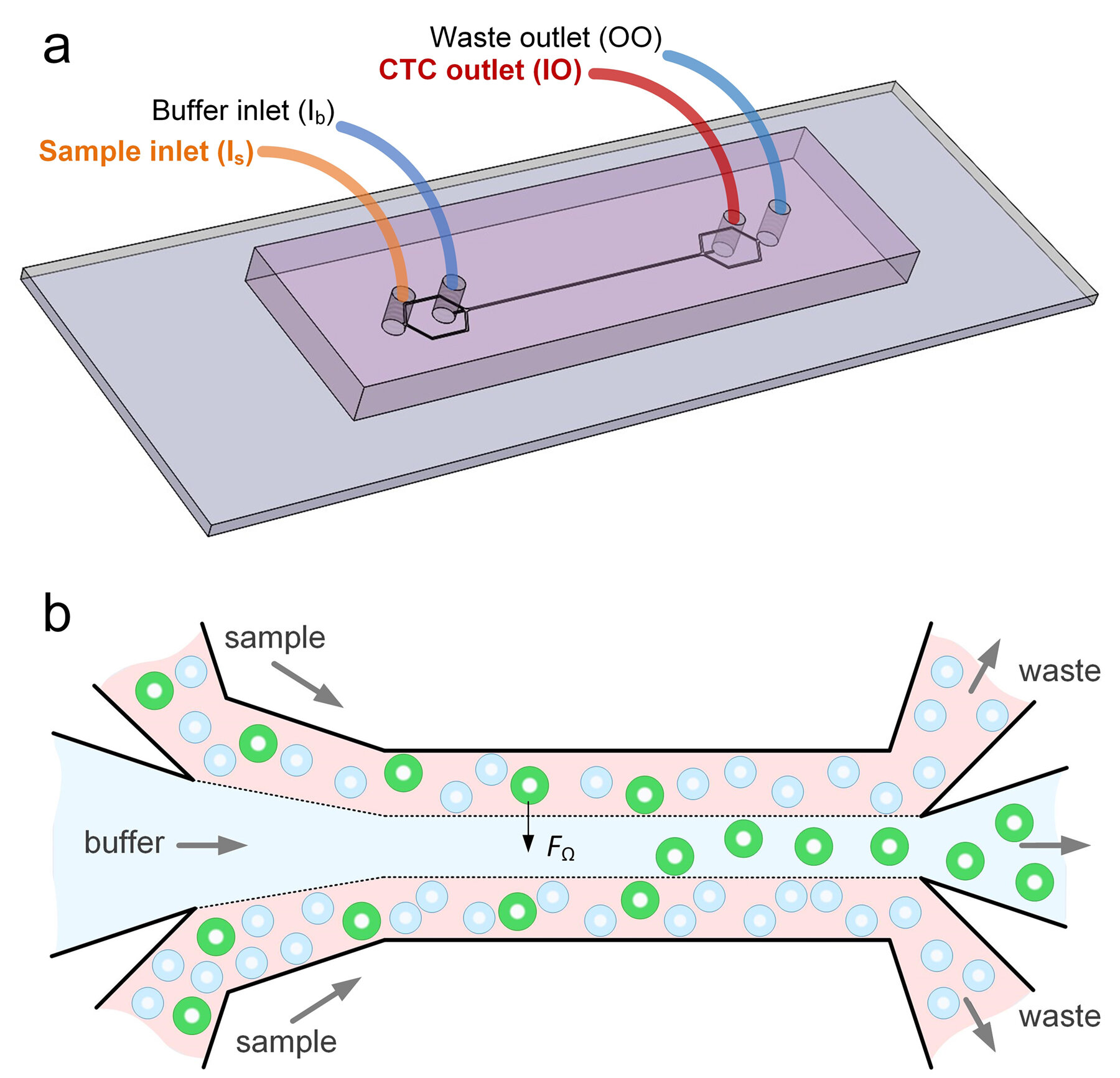 Researchers from the University of Illinois at Chicago and the Queensland University of Technology in Australia have developed a device capable of isolating individual cancer cells from within the world. blood samples from patients. The microfluidic device works by separating the different types of cells present in the blood by their size. The device may one day make quick and inexpensive liquid biopsies to help detect cancer and develop targeted treatment plans. The results are reported in the newspaper Microsystems and nanotechnologies.

"This new microfluidic chip allows us to separate cancer cells from whole blood or diluted blood to a minimum," said Ian Papautsky, professor of bioengineering Richard and Loan Hill at the UIC Engineering College. and corresponding author of the newspaper. "While detection devices for cancerous cells circulating in the blood become available, most are relatively expensive and out of reach of many research laboratories or hospitals.Our device is cheap and does not require much preparation or dilution of samples, making it a quick and easy-to-use solution. "

The ability to successfully isolate cancer cells is a crucial step to allow a biopsy in a liquid medium where the cancer could be detected by a simple blood test. This would eliminate the discomfort and cost of tissue biopsies using needles or surgical procedures as part of the cancer diagnosis. The liquid biopsy could also be useful for monitoring the effectiveness of chemotherapy over time and for detecting cancer in organs difficult to access by traditional biopsy techniques, including the brain and lungs.

However, isolating blood from circulating tumor cells is not an easy task because they are present in very small amounts. For many cancers, circulating cells are present at levels close to one to one billion blood cells. "A blood tube of 7.5 milliliters, typical volume of a blood test, could contain ten cancer cells and 35 to 40 billion blood cells," Papautsky said. "So we are really looking for a needle in a haystack."

Microfluidic technologies represent an alternative to traditional methods of cellular detection in fluids. These devices use markers to capture target cells as they move, or exploit the physical properties of the targeted cells – primarily their size – to separate them from other cells in the fluids.

Papautsky and his colleagues developed a device that uses size to separate tumor cells from blood. "Using size differences to separate cell types in a fluid is much easier than affinity separation, which uses" sticky "tags that capture the right type of cell as it passes." Papautsky. "Affinity separation also requires a lot of advanced purification work, which size separation techniques do not need."

The device developed by Papautsky and his colleagues exploits the phenomena of inertial migration and shear-induced diffusion to separate cancer cells from blood when it passes through plastic "microchannels". "We are still studying the physics behind these phenomena and their interaction in the device, but this one separates cells according to minimal size differences that dictate the cell's appeal for various locations." in a column of liquid when it moves. "

Papautsky and his colleagues "enriched" samples of 5 milliliters of healthy blood with 10 small cell lung cancer cells and then put the blood into their device. They were able to recover 93% of the cancer cells using the microfluidic device. Microfluidic devices previously developed and designed to separate circulating tumor cells from blood had recovery rates of between 50% and 80%.

When they analyzed eight blood samples taken from patients with non-small cell lung cancer, they were able to separate the cancer cells from six of the samples using the microfluidic device.

In addition to the high efficiency and reliability of the devices, Papautsky said that another benefit was to require only a small dilution. "Without having to dilute, the time needed to analyze the samples is shorter, as is the preparation time." They used whole blood in their experiments as well as diluted blood only three times, which is little compared to other cell separation protocols using devices based on inertial migration.

Papautsky and her colleague, Dr. Alicia Hubert, assistant professor of surgery at the UIC College of Medicine, recently received a one-year grant of $ 125,000 from the University Cancer Center. of Illinois to develop a microfluidic device capable of separating circulating tumor cells. detect the DNA of cancer cells in the blood of patients with lung cancer. They will use the blood of patients seen at the Cancer Center of the University of Illinois to test the effectiveness of their prototype.

Explore further:
New options for easy and accurate extraction of rare cells or separation of blood