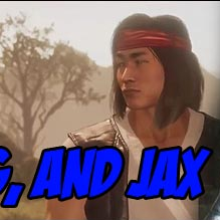 Notably, we also see Kitana in the trailer. Interestingly enough, State of Play's narrator only confirmed that Jax, Liu Kang and Kung Lao were recently revealed fighters for Mortal Kombat 11.

"It's official, the veterans of the Jax series, Kung Lao and Liu Kang join the ever-growing range of Mortal Kombat 11," said the State of Play narrator. "And stay tuned, NetherRealm promises more updates before it's launched on April 23."

This revelation was central to the story. In several scenes, we see past versions of fighters confronting their future.

For example, Liu Kang and Kung Lao have become ghosts on the Dutch side. The "good versions" of Shaolin monks come from the past and will fight against their diabolical versions of history.

Although Johnny Cage and Jax are good men in the current chronology, even they seem to have oxen with their past.

Of course, other fights also break out. Liu Kang and Kung Lao have been shown to have great difficulty dealing with Geras because of his ability to manipulate time.

Mortal Kombat 11 will be released on April 23, 2019. Those who pre-order the game will have access to the beta that will begin on March 27. The characters featured in this beta will be Skarlet, Scorpion, Baraka, Jade and Kabal.

Also remember that Shao Kahn will be a pre-command character bonus and that Shang Tsung will be Mortal Kombat's first DLC fighter.