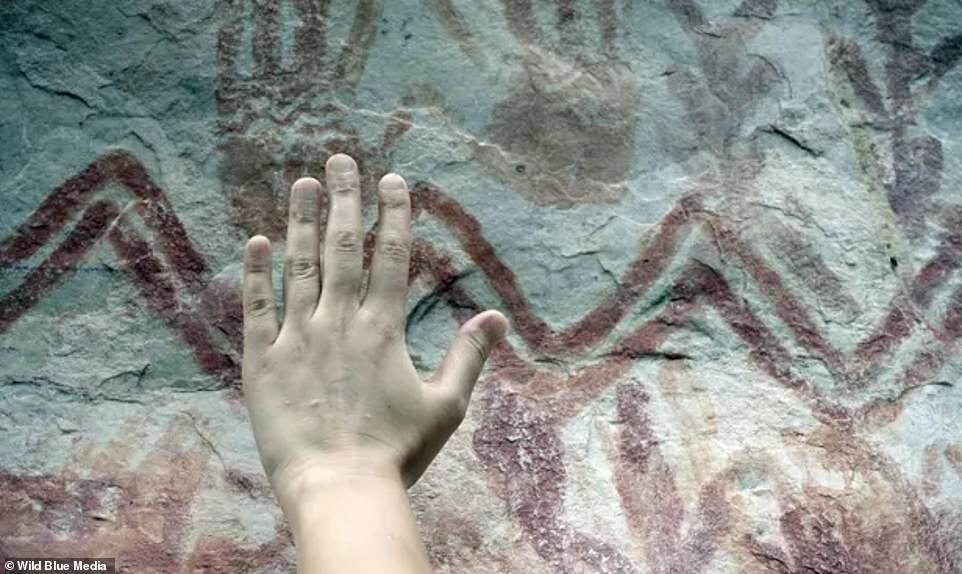 The thousands of images are among the oldest depictions of people interacting with the huge creatures, including behemoths. Usually the only clues to their appearance are skeletal remains.

It is one of the largest collections of rock art in South America. The recorded drawings, probably first made around 12,600 and 11,800 years ago, are found on three rock shelters on hills in the Colombian Amazon. The paintings, identified during landscape surveys, also depict geometric shapes, human figures and handprints, as well as hunting scenes and people interacting with plants, trees and animals of the savannah. The vibrant red images have been produced over a period of hundreds, if not thousands of years. Some are so tall and inaccessible, special ladders made from forest resources would have been needed and they would have been hidden from view of anyone visiting the rock shelter.

There are drawings of deer, tapirs, alligators, bats, monkeys, turtles, snakes, and porcupines, as well as what appears to be Ice Age megafauna. These now extinct animals are depicted in rock art in central Brazil, but experts believe the drawings are more realistic. There are depictions of creatures resembling a giant sloth, mastodon, camels, horses, and three-toed ungulates with trunks. These native animals have all become extinct, possibly due to a combination of climate change, habitat loss, and hunting by humans.

Excavations, in the deep soil around the shelters, revealed one of the earliest safe dates for the occupation of the Colombian Amazon and clues to the diet of people at that time, as well as the remains of small tools and of scraped ocher used to extract pigments. do the paintings.

The communities that were living in the area when the drawings were made were hunter-gatherers who were fishing in the nearby river. Bones and plant remains uncovered during excavations show they ate fruit from palms and trees, piranhas, alligators, snakes, frogs, rodents such as paca and capybara, and armadillos.

The discovery was made by researchers from the ERC LASTJOURNEY project, who are working to find out when people first settled in the Amazon, and the impact their farming and hunting had on the region’s biodiversity. He is featured in a new Channel 4 series, Jungle Mystery: Lost Kingdoms of the Amazon. The results are also described in an article in the journal Quaternary International.

The paintings, on the specially prepared rock walls of the Serranía La Lindosa, on the northern edge of the Colombian Amazon, are further evidence of the impact of the first human communities on the biodiversity of the Amazon and their adaptation to climate change. . By the time the drawings were made, temperatures were rising, initiating the region’s transformation from a mosaic landscape of uneven savannahs, thorny scrub, gallery forest and rainforests with mountain features in the tropical Amazon rainforest to broad leaves today.

Rock shelters are far from modern settlements and trails, but were known to some local communities, who helped researchers explore them.

The research was made possible following the 2016 peace treaty between the FARC and the Colombian government.

Dr Robinson said: “These are truly amazing images, produced by the original inhabitants of the Western Amazon. They moved to the region at a time of extreme climate change, which was causing changes in vegetation and composition of The Amazon rainforest was still transforming into the rainforest that we recognize today.

“The paintings provide a vivid and exciting glimpse into the life of these communities. It is incredible for us today to think that they lived among and hunted among giant herbivores, some of which were the size of a small car.”

The rock shelters are exposed to the elements, which means other paintings in the Amazon discovered by experts have been damaged and images are unclear. The communities exfoliated or peeled the rock using fire to create smooth surfaces for their art.

These new finds are in shelters more protected by overhanging rocks, or by wind and rain blowing in a different direction.

Professor Iriarte said: “These cave paintings are spectacular evidence of how humans rebuilt the earth, and how they hunted, farmed and fished. It is likely that art was a powerful part of culture and a way for people to connect socially. The images show how people would have lived among giant, now extinct animals that they hunted. “

Experts carried out the excavations in 2017 and 2018. The largest set of paintings were found at Cerro Azul, where there are a total of 12 panels and thousands of individual pictograms depicting humans, animals, plants, hand prints and geometric shapes. The paintings of Cerro Montoya and Limoncillos were more faded.

The find is featured in a new Amazon series, coming to Channel 4 the first week of December – Jungle Mystery: Lost Kingdoms of The Amazon. Led by Ella Al Shamahi, the series explores lost civilizations and uncovers hidden ancient settlements and never before seen rock art.

Provided by the University of Exeter

NASA investigates a galaxy that explodes every 114 days