Oklahoma-West Virginia postponed due to COVID-19 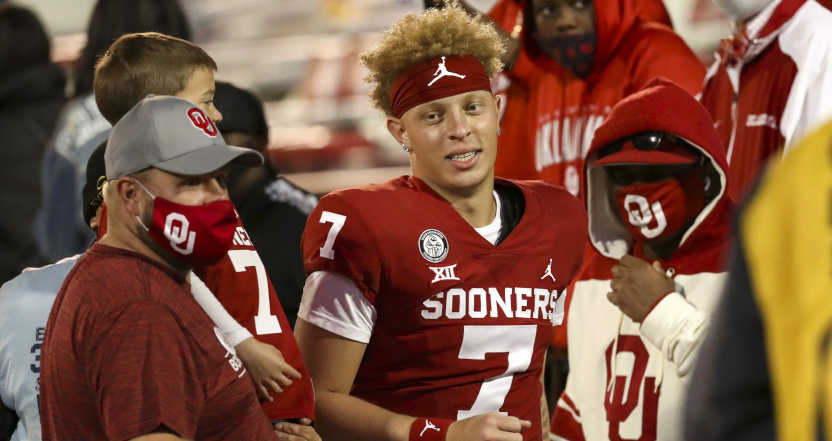 COVID-19 continues to wreak havoc in sports. This week has seen tons of issues in both men’s and women’s college basketball and the NFL, and college football has been facing plenty of issues this year as well. The latest college football postponement comes from Oklahoma (No.11 in CFP rankings, No.14 in AP poll) against West Virginia, which was set for the showcase of ABC’s Saturday night game at 7:30 p.m. Eastern time. That game was postponed Wednesday due to COVID-19 issues with the Oklahoma squad (quarterback Spencer Rattler is seen above following last week’s game against Kansas):

It is not known at this time what ESPN will replace to fill this ABC slot. Other games slated to air on their networks around this time include a wave slated for the 7 p.m. Kicks East: LSU-Texas A&M (ESPN), Kansas State-Baylor (ESPN2) and Duke -Georgia Tech (ESPN3). At 7:30 p.m. EST, Georgia # 13 (CFP) is in South Carolina (SEC Network, ESPN Radio). And at 8 p.m. EST, there’s Troy-Appalachian State on ESPNU and Virginia-Florida State on ACC Network. The Duke-Georgia Tech game is probably going on a linear channel, but it’s unclear if this will be put on ABC or if it will go on a smaller channel and everything else will go from level to level. Last week, when the noon ET (Clemson-Florida State) game for ABC was suddenly called off on Saturday morning, the Florida-Vanderbilt game was transferred there from ESPN.

It is also unclear what this means in terms of advertisers. The typical prime-time crew of Joe Tessitore, Greg McElroy, and Holly Rowe had to call Oklahoma-West Virginia. We’ll see if they get another assignment this week.