Rare doses and empty vaccination centers: the puzzle of vaccine deployment in Germany 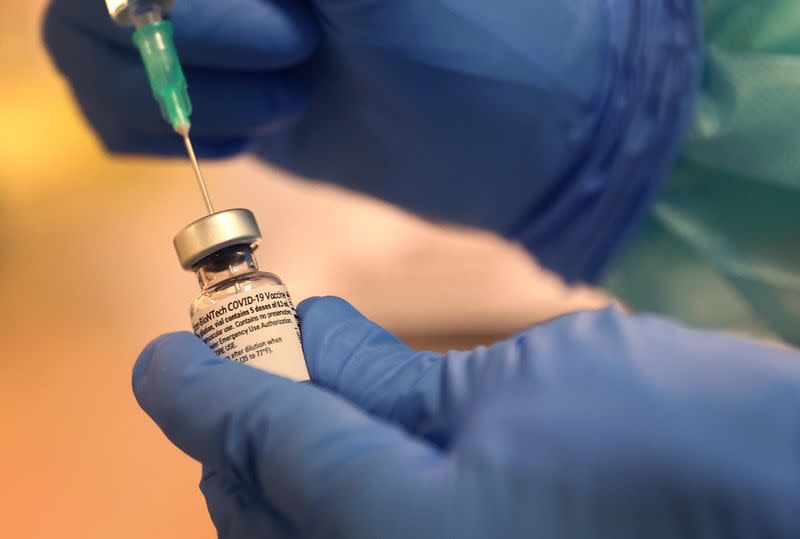 By Caroline Copley and Annkathrin Weis

BERLIN / DILLENBURG, Germany (Reuters) – Proud of their national reputation for efficiency, Germans are increasingly frustrated by the slow deployment of a COVID-19 vaccine that its scientists have helped develop.

Scarcity of vaccine supply, heavy paperwork, shortage of health workers, and an elderly and immobile population hamper efforts to bring early doses of a vaccine made by Pfizer in the United States and its German partner BioNTech in the arms of the people.

Germany has set up hundreds of vaccination centers in sports halls and concert halls and has the infrastructure to administer up to 300,000 injections per day, said Health Minister Jens Spahn.

But the majority remain empty, with most states not planning to open centers until mid-January, as they prioritize sending mobile teams to care homes.

A day spent with a vaccination team in the small town of Dillenburg, 100 km (60 miles) north of Germany’s financial capital, Frankfurt, shows how tedious the task is.

The team begins by loading a cooler containing 84 doses of the Pfizer vaccine thawed overnight into a waiting ambulance and heads towards Elisabeth nursing home.

There they are greeted by Director Peter Bittermann, who has already processed the forms necessary to vaccinate residents and staff, and provided space for injections to be administered and recipients monitored after vaccination.

The four-member vaccination team, plus two trainees, has only a few hours to administer the temperature-sensitive Pfizer vaccine before it is no longer fit for use.

“We were able to recruit some, but there will never be enough,” she told Reuters TV.

In the first two weeks of its vaccination campaign, Germany administered 533,000 injections, just two-fifths of the 1.3 million doses received. Britain, on the other hand, has hit the 2 million mark.

Israel, the world leader in terms of the proportion of the population covered, inoculates 150,000 people every day, with its universal and digital health system making it easier to schedule appointments.

Elsewhere in Europe, the decentralization of the vaccination operation in Spain has highlighted differences between regions and led to tensions with the central government.

The 16 German states criticize the federal government for not guaranteeing enough doses. Doctors at some centers say shifts have been canceled. In Berlin, a vaccination center was opened, but closed for the New Year due to a lack of vaccines.

Spahn says manufacturing issues rather than too few orders are to blame for the limited supply, after Pfizer and BioNTech in December halved their production forecast to 50 million doses by the end of the year. Each recipient needs two hits.

The government is working with BioNTech to open a new production site in the western city of Marburg, he said. BioNTech’s chief executive said last week that the Marburg plant could go into operation in February, ahead of schedule.

“With the capacity that we have already built in Germany, we will be able to perform between 250,000 and 300,000 vaccinations per day – when we have the vaccine doses,” Spahn said this week.

Germany expects to receive 5.3 million doses of Pfizer / BioNTech by mid-February and an additional 2 million doses of a second vaccine from Moderna, which has just been approved by the European Union , by the end of March.

Yet this will barely be enough to cover the 5.7 million people, or 6.8% of the population, over the age of 80.

As in Spain, state-by-state performance in Germany varies considerably. Top of the class is Mecklenburg-Vorpommern in the north, with 15.6 vaccinations per 1,000 inhabitants, while Saxony has a rate of just 4.4.

In Thuringia, another latecomer, State Prime Minister Bodo Ramelow, said on Tuesday that many doses sent to hospitals had been returned. “If the brakes come at a vaccination rate of 30 or 33%, we have a real problem,” he told Deutschlandfunk radio.

Photos in Saxony were stored centrally until recently, meaning mobile teams had to travel long distances before going to nursing homes.

Unlike Dillenburg, Saxony has been overrun with volunteers for its vaccination campaign, said Lars Werthmann, head of regional logistics at the German Red Cross.

“The next gigantic task is to coordinate all of these people,” said Werthmann.

Doctors, meanwhile, express frustration with appointment-scheduling systems that vary from state to state, saying they cause confusion and erode trust.

To speed up the rollout of COVID-19 vaccines, Germany should distribute them through its network of family doctor’s offices as soon as there is a vaccine that can be easily stored in a refrigerator, Berlin pediatrician Burkhard Ruppert said.

Germany hopes to administer injections to doctors’ offices in a second phase.

“Our strength in Germany is this outpatient care system,” said Ruppert, who heads a local doctors association. “We are not a country of large-scale managed systems like the UK or Israel might be.”

“We are in a race against a virus,” he added. “We will only win if we vaccinate as much and as quickly as possible.”

(Reporting by Caroline Copley in Berlin and Annkathrin Weis in Dillenberg; Additional reporting by Emma Pinedo Gonzalez in Madrid and Nadine Schimroszik in Berlin; Editing by Douglas Busvine and Jan Harvey)