Ren Zhengfei, founder of Huawei, said that the United States "can not crush us" 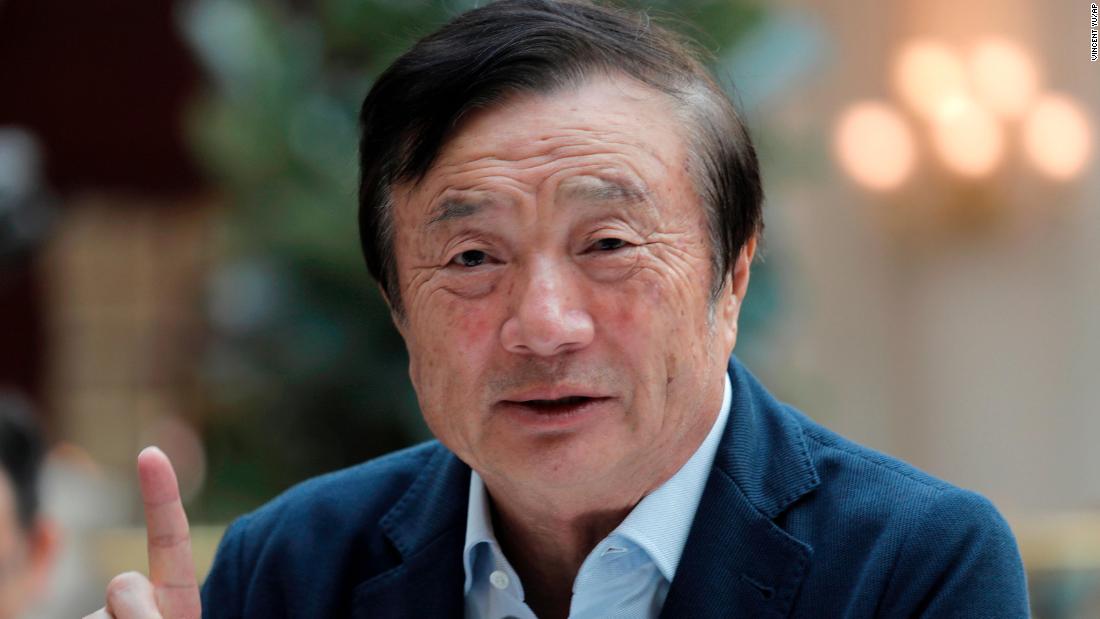 "It's impossible for the United States to crush us," Ren Zhengfei said in an interview with the BBC on Tuesday. "The world needs Huawei because we are more advanced."

Huawei, the world's largest telecommunications equipment manufacturer, is fighting a US-led campaign to convince its US allies to shut down the company's 5G high-speed network technology.

Australia and New Zealand have already banned mobile operators from using Huawei devices for 5G. The United Kingdom, Germany and other countries are planning to do it too.

The US government claims that Huawei's products could be exploited by Chinese intelligence services for espionage – an assertion that the company has repeatedly denied.

US prosecutors also charged Huawei and his financial director, Meng Wanzhou, with bank fraud and non-compliance. Meng, one of Ren's two daughters, was arrested in Canada in December and is at risk of being extradited to the United States.

The US offensive against Huawei has strained relations between Washington and Beijing, and threatens to disrupt the deployment of 5G networks around the world.

"We need to protect our critical telecommunications infrastructure, and the United States calls on all security partners to be vigilant and to reject any business that compromises the integrity of our communications technology or our national security systems." Saturday, US Vice President Mike Pence said. the Munich conference on security.

"America does not represent the world"

Ren, 74, founded Huawei 32 years ago after serving in the Chinese army as an engineer and in the oil industry. Son of rural school teachers in the mountains of Guizhou Province, he built his business into a global giant with an annual business turnover of more than 100 billion dollars.

Ren, who retains the title of CEO, told the BBC that even if the US persuaded more countries to stop using Huawei, the company "could just reduce things a little".

"If the lights go out in the west, it will still shine," he said. "And if the North is dark, then there is always the South America does not represent the world."

Analysts agree that Huawei's broad global operations, which are strong in many emerging markets, could survive even though the US government is persuading more of its allies to exclude its products from 5G networks. It is generally believed that the company outperforms its major rivals in 5G technology, making it almost irreplaceable for some wireless media.
Huawei is also a leading smartphone manufacturer with the goal of surpassing Samsung as one of the world 's leading manufacturers next year.
But it is always vulnerable. According to analysts, the Trump administration could use Huawei 's recent indictment to prohibit it from buying essential components to US companies. This would almost certainly plunge Huawei into a crisis similar to that suffered by his little Chinese rival ZTE (ZTCOF)who was paralyzed for months by a similar ban last year.

Huawei and Meng deny the charges against them last month by US prosecutors.

Ren told the BBC that he opposed his daughter's request for extradition from the United States, saying it was "politically motivated".

"They may have thought that if they stopped her, Huawei would fall, but we did not fall," he said. "We continue to move forward."

In comments to the media last month, Ren said that he was much missed by Meng, but had also described their relationship in an ambivalent way.

"It's a close relationship in some respects and not so close to others," he said.

"Throughout his childhood, I was in the army, which means that every year I left for 11 months, spending a month with my family," he said. "Our relationship during her childhood and adolescence was not so strong."

Later, he fought for Huawei's survival and worked regularly 16 hours a day. He admitted that he was close to any of his three children, but that he feels indebted to them.

"We always trust the United Kingdom"

The Chinese government vigorously defended Huawei as he was under increasing pressure from the United States and demanded Meng's immediate release. Foreign Ministry spokeswoman Hua Chunying said on Monday that Pence's remarks in Munich were "hypocritical, immoral, unjust and intimidating".

She reiterated Peking's criticism that the US government's goal was to "repress the legitimate rights and interests of Chinese companies by fabricating lies and intervening in economic activities through political means."
A potential crack appeared this week in the alliance that the United States is trying to build against Huawei.
British intelligence concluded that there were ways to limit the risks associated with the use of Huawei equipment for building 5G networks, according to a Financial Times report. The UK government, which is a member of a key intelligence-sharing alliance with the United States, said in response to the report that it planned to complete its review of the security of technology. 5G network in the spring, but that no decision had been taken yet.

Huawei is already largely excluded from the US telecom equipment market and Ren told the BBC that if the US government continues to oppose the company's investments, it would simply transfer more business UK.

"We will continue to invest in the UK," he said. "We are still confident in the UK and we hope the UK will give us even more confidence."