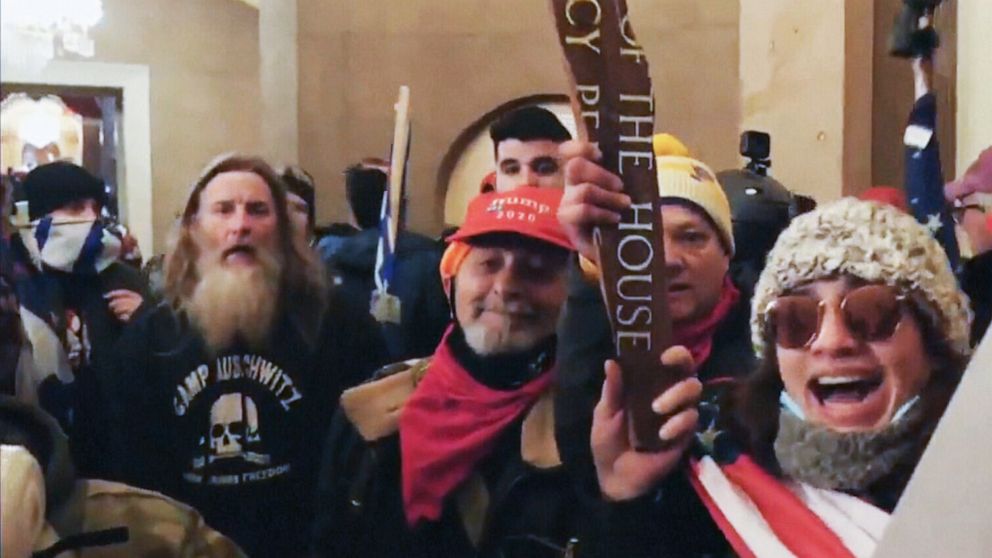 Several people who participated in the siege of Capitol Hill last week have been arrested.

The image of a man wearing a black hoodie with the words “Camp Auschwitz” emblazoned in white letters inside the US Capitol building has been widely shared on social media.

Packer has a long criminal record in the area and has been arrested on Newport News “well over a dozen times,” Newport News Sheriff Gabriel Morgan told ABC News.

Previous offenses have included assault and battery, driving under the influence, drunkenness in public, driving under revocation and breach of probation, among others, Morgan said. Packer was last incarcerated in the county in 2012.

Packer faces charges of illegal entry into the U.S. Capitol and violent entry and disorderly conduct on the Capitol grounds, according to an arrest warrant filed in federal court in Virginia.

He did not plead in court. ABC News was unable to reach him immediately or a lawyer for him for comment.

He was being held at Western Tidewater Regional Jail and is scheduled to appear in federal court in Norfolk, Va. On Wednesday afternoon.

Packer was released on the condition that he remain out of Washington, DC, and appear in court virtually on January 19. He was represented by a public defender but said he planned to retain his own lawyer.

Rioter who was next to the woman when she was shot

A rioter who stood next to Air Force veteran Ashli ​​Babbitt when she was shot and killed by a Capitol policeman was also arrested by the FBI on Wednesday.

Thomas Baranyi, 28, a resident of New Jersey, appeared briefly in federal court in Newark, where the bond was set at $ 100,000.

Court records cited Baranyi’s television interview in which he showed a journalist’s blood on his hand after storming the Capitol.

In the interview, Baranyi explained that he had blood on his hand after breaking into the Capitol and that a “young woman” had rushed through the windows.

“A number of policemen and Secret Service were saying, get off, get out. She didn’t listen to the call and as we were running to try to grab people and pull them back they shot her. bullet in the neck, and it fell back on me, ”Baranyi said during the interview, according to court documents.

A Metropolitan Transportation Authority employee who was arrested following his participation in the Capitol Riots appeared in federal court in White Plains, New York on Wednesday.

William Pepe, 31, who works on the Metro-North, was recognized by his colleagues and MTA management from photos of him wearing an American flag bandana that circulated from inside the US Capitol building.

Pepe has been charged with one count of knowingly entering or staying in a building or restricted land without legal permission, according to the Justice Department.

Pepe was released on $ 10,000 bail, but a federal judge ordered Pepe to turn over a shotgun and hunting knife to local police. He also cannot own any other firearms or weapons.

He was arrested Tuesday in the Hudson Valley. He had summoned the sick on January 6 to participate in the riots.

Pepe, who had been employed as a maintenance worker for the MTA for six years, was initially suspended, but the MTA is now working to fire him, the transport company said.

The Justice Department has charged two officers in Rocky Mount, Va., Of participating in last week’s riot on the U.S. Capitol.

Thomas Robertson and Jacob Fracker posted a photo of themselves with their middle fingers in front of the statue of Revolutionary War hero John Stark.

After posting the photo, the pair have repeatedly defended their participation in the riots in separate social media posts. Robertson reportedly said he was “proud” of the photo because he “was ready to put the skin in the game”.

Fracker later deleted a Facebook post in which he wrote: “Lol to anyone who might be concerned about the photo of me going around … Sorry, I hate freedom? … Not like I do. did something illegal … you do what you think you need to … “

The couple also gave interviews to the media after witnessing the riots.

During their initial appearance in West Virginia District Court on Wednesday afternoon, Robertson and Fracker were charged with illegally entering the Capitol and were ordered by Judge Robert Ballou to stay away from Washington, DC , and not to participate in any public event.

Ballou also demanded that they surrender their firearms by Friday and stay at home, saying he understood they had both been put on administrative leave by the police department.

While the Justice Department asked Ballou to order the two to be fitted with GPS monitors to ensure they stay clear of DC, Ballou denied the request citing their police status and their military service history.

The Rocky Mountain Police Department did not immediately respond to ABC News’ request for comment.

According to the Justice Department, he was accused of knowingly entering or remaining in a building or restricted land without legal permission and violent entry and disorderly conduct on the Capitol grounds.

Colt is currently being held at the Ada County Jail in Boise, Idaho, and is scheduled to appear in federal court on Wednesday.

A New York City man armed with an arsenal of weapons has appeared in federal court after allegedly threatening to carry out another attack on the Capitol as well as New York City.

The FBI took Eduard Florea into custody Tuesday at his home in Middle Village, Queens, after he allegedly published online threats to send an armed trailer to the Capitol.

Florea is accused of being a criminal in possession of ammunition, which federal prosecutors have called a “serious offense” that could put him in prison for up to 10 years.

Judge Sanket Bulsara refused him bail, in agreement with prosecutors who said he posed “a significant danger to the community” and a risk of absconding.

“It appears that during the day of January 6, as events unfolded, Mr. Florea continued to display and clarify a premeditated plan to demand violence against the people in New York and the people in Washington, against the US senators, ”Bulsara said. .

He was also under investigation for alleged links to the Proud Boys, and he admitted to being a supporter of the far-right organization, a law enforcement official told ABC News.

Several other people involved in the siege have been arrested in the country in recent days.

Many rioters have been implicated in their own social media posts, ABC News chief investigative reporter Josh Margolin said on Monday on “Start Here,” a daily ABC News podcast.

Suspected rioters who allegedly brought ties and tactical gear were arrested in Texas and Tennessee on Tuesday.

The man seen carrying President Nancy Pelosi’s lectern through the halls of the Capitol and the shirtless man dressed in horns, a bearskin headdress and red, white and blue make-up were arrested Friday in Florida and Arizona, respectively.