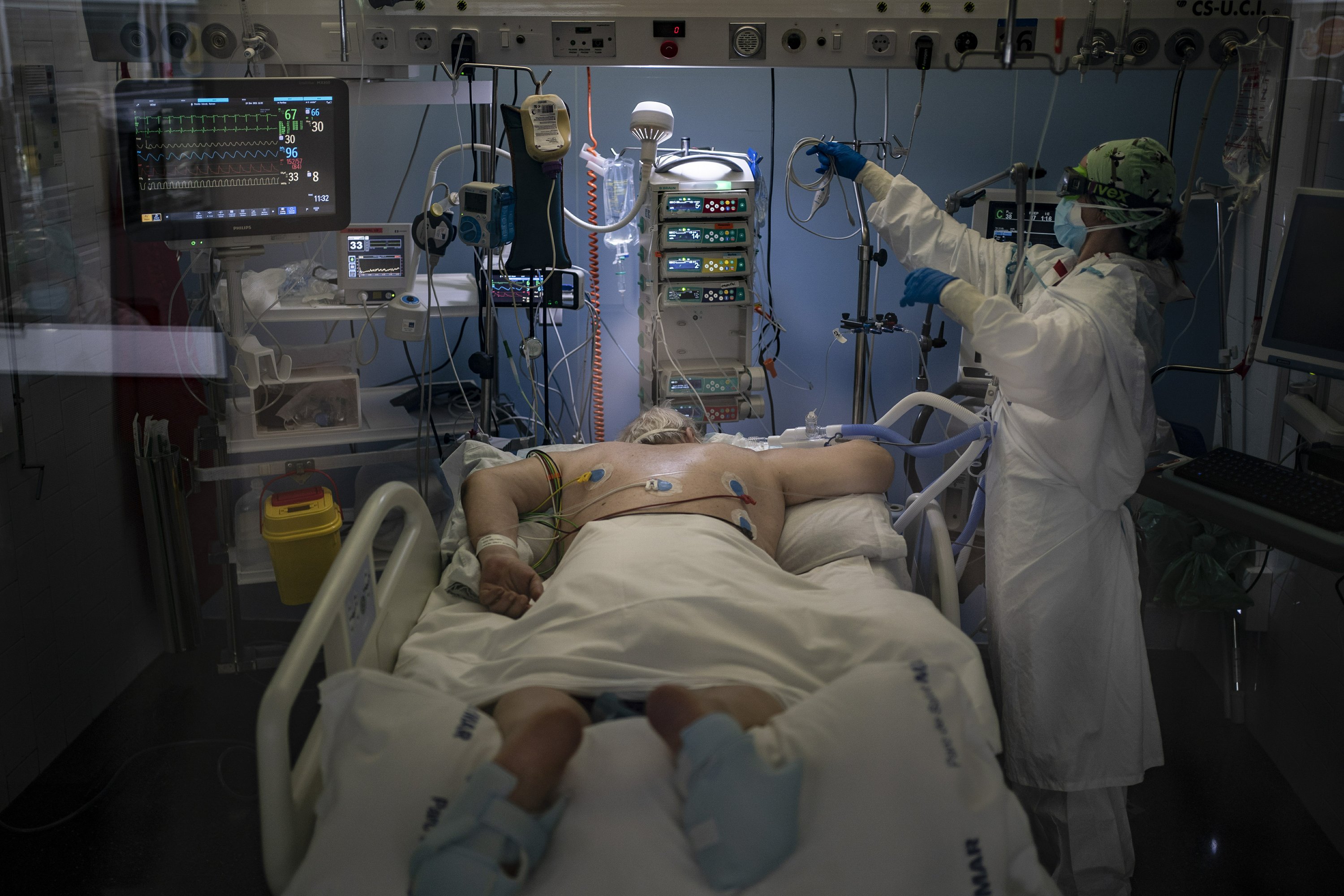 BARCELONA, Spain (AP) – The relentless rise in COVID-19 infections in Spain after the holiday season is once again straining hospitals, threatening the mental health of doctors and nurses who are at the forefront of the pandemic for almost a year.

At Barcelona Hospital del Mar, intensive care capacity has more than doubled and is almost full, with 80% of intensive care beds occupied by patients with coronavirus.

“There are young people 20 and over 80, of all age groups,” said Dr Joan Ramon Masclans, who heads the ICU. “It’s very difficult and it’s one patient after another.”

Even though authorities allowed gatherings of up to 10 people for Christmas and New Year’s celebrations, Masclans chose not to join his family and spent the holidays at home with his partner.

“We did it to protect our health and the health of others. And when you see that it’s not being done (by others), it causes a lot of anger, which adds to the fatigue, ”he says.

A study published this month by Hospital del Mar examining the impact of the COVID-19 spring surge on more than 9,000 health workers across Spain found that at least 28% were suffering from major depression. That’s six times higher than the rate in the general population before the pandemic, said Dr Jordi Alonso, one of the chief researchers.

In addition, the study found that almost half of the participants were at high risk for anxiety, post-traumatic stress disorder, panic attacks, or substance and alcohol abuse problems.

Spanish health workers are far from the only ones to have suffered psychologically from the pandemic. In China, levels of mental disorders among doctors and nurses were even higher, with 50% depression, 45% anxiety, and 34% insomnia, according to the World Health Organization.

In the UK, a survey released last week by the Royal College of Physicians found that 64% of physicians reported feeling tired or exhausted. One in four requested mental health support.

“It’s pretty horrible right now in the medical world,” said Dr Andrew Goddard, president of the Royal College of Physicians, in a statement accompanying the study. “Hospital admissions are at the highest level ever, the staff are exhausted, and although there is light at the end of the tunnel, that light seems far away.”

Dr Aleix Carmona, a third-year anesthesiology resident in the northeastern region of Spain, Catalonia, didn’t have much experience in intensive care before the pandemic hit. But as the surgeries were canceled, Carmona was summoned to intensive care at Moisès Broggi hospital outside Barcelona to fight a virus that the world knew very little about.

“At the start we had a lot of adrenaline. We were very scared but we had a lot of energy, ”recalls Carmona. He made it through the first few weeks of the pandemic without having much time to complete the unprecedented battle that was unfolding.

It wasn’t until after the second month that he began to feel the weight of seeing firsthand how people were slowly dying while they were out of breath. He wondered what to tell patients before intubating them. His first reaction had always been to reassure them, to tell them that everything would be fine. But in some cases, he knew it wasn’t true.

“I started having trouble sleeping and feeling anxious before each shift,” Carmona said, adding that he came home after 12 hours feeling beaten up.

For a while he was only able to sleep with the help of medication. Some colleagues have started taking antidepressants and anxiolytics. What really helped Carmona, however, was a support group in her hospital, where her colleagues unloaded the experiences they had accumulated inside.

But not everyone joined the group. For many, asking for help would make them unfit for the job.

“In our profession we can manage a lot of things,” said David Oliver, spokesperson for the Catalan section of the SATSE nurses’ union. “We don’t want to take time off because we know we’re going to add to the workload of our colleagues.”

The most affected group of healthcare workers, according to the study, were caregivers and nurses, who are predominantly women and often immigrants. They spent more time with dying COVID-19 patients, faced poor working conditions and wages, and feared infecting family members.

Desirée Ruiz is the supervising nurse in the intensive care unit at del Mar Hospital. Some nurses on her team have requested time off from work, unable to cope with the constant stress and all the deaths.

To prevent infections, patients are rarely allowed to visit their families, which adds to their reliance on nurses. Conveying a patient’s last wishes or words to loved ones over the phone is especially difficult, Ruiz said.

“It’s very difficult for … the people who hold the hands of these patients, even though they know they will die eventually,” she said.

Ruiz, who organizes the nurses’ shifts and ensures that the ICU always has adequate staff, is finding it increasingly difficult to do so.

Unlike the summer, when the number of cases declined and health workers were encouraged to take vacations, doctors and nurses have been working tirelessly since the fall, when virus cases resumed.

The latest resurgence nearly doubled the number of daily cases seen in November, and Spain now has the third highest COVID-19 infection rate in Europe and the fourth highest death toll, with more than 55,400 confirmed deaths.

But unlike many European countries, including neighboring Portugal, the Spanish Minister of Health has so far ruled out the possibility of a new lockdown.instead, relying on less drastic restrictions that are not as damaging to the economy, but which take longer to reduce the rate of infections.

Alonso fears that the latest wave of patients infected with the virus will be as damaging to the mental health of medical staff as the shock of the first months of the pandemic.

“If we want to be adequately cared for, we must also take care of the health workers, who have suffered and are still suffering,” he said.

All Publix pharmacies in Florida will administer COVID injections

GlaxoSmithKline rethinks strategy for Covid-19 antibody – not Vir – after test flop. Is there hope in high risk patients? – Endpoints News