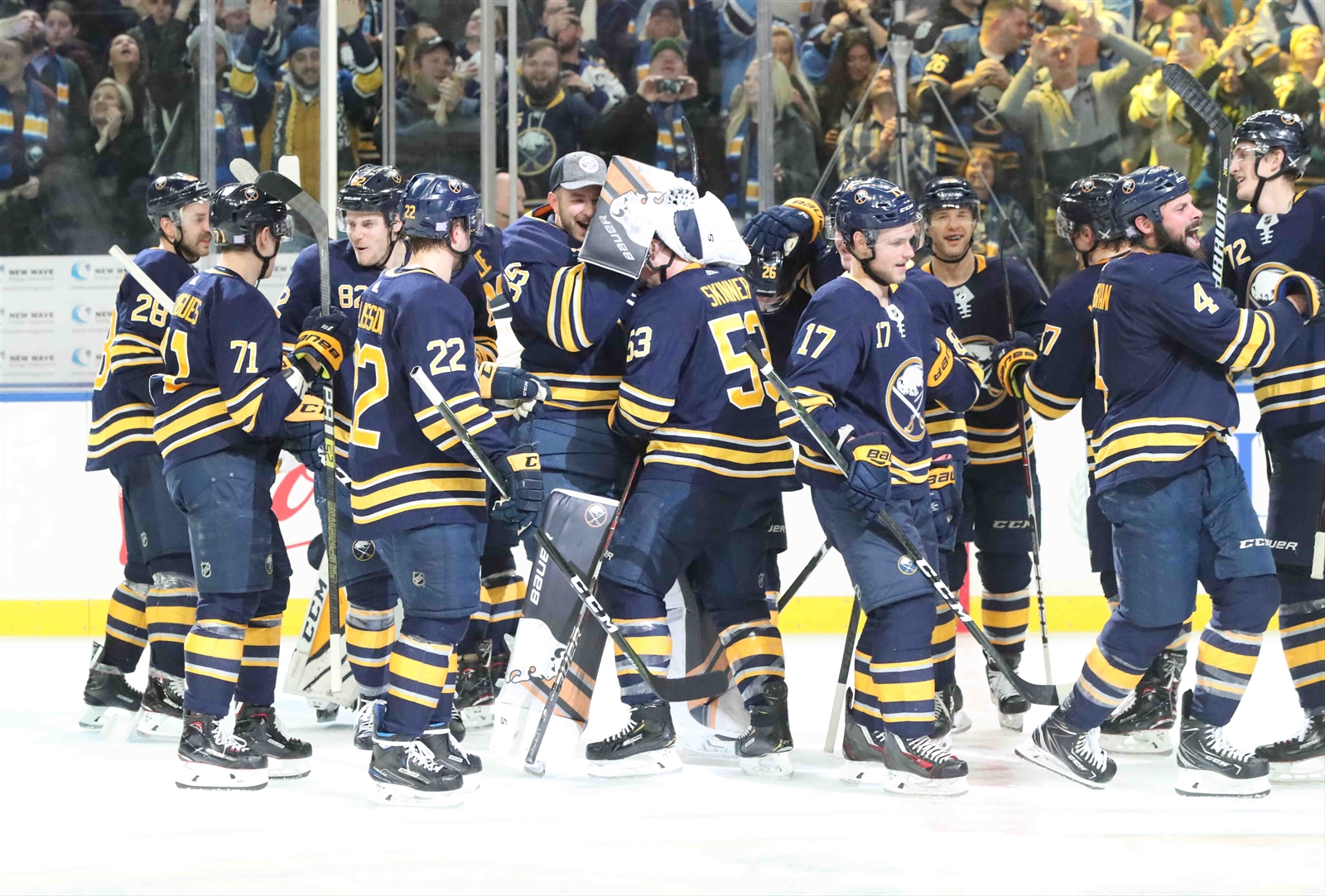 The singing began shortly after Buffalo Sabers defenseman Nathan Beaulieu made a pass in the net for a two-goal lead in the third period.

"We want 10 people," shouted Tuesday night in unison the crowd of KeyBank Center.

Sabers delivered. Jeff Skinner scored a time of 1:41 in overtime and Carter Hutton made 36 saves to defeat the San Jose Sharks, 3-2, for a third straight 10-game winning streak in franchise history and a first since 2006-07.

Skinner scored when San Jose goaltender Martin Jones left the pit to hit a loose puck, allowing Skinner to grab the puck and beat Jones for his 19th goal of the season.

Sharks center Joe Pavelski scored on a half-time strike on a pass at 11:29 in the third period and at 4:42 pm to tie the score with a power-play goal wrap, erasing the lead. both goals of the Sabers.

Defender Rasmus Ristolainen of Buffalo scored a goal at 14:42 in the second period. He rushed into the left wing, passed between his legs and skated around the former winner of the Norris Brent Burns Trophy to beat Martin Jones. After eliminating Rasmus Dahlin's penalty at 1:35 of the third minute, Buffalo added an extra advantage to Beaulieu when Beaulieu scored a back pass by Sam Reinhart.

The Sabers were again led 38-31 and failed to capitalize on their only power play. They also eliminated the first three power games of San Jose, only to allow a tying goal. Hutton has won eight consecutive starts and has 12 in his first season with the Sabers.

blurThe Sharks nearly equaled the score at 1:35 of the third period, when striker Timo Meier tried a lost pass and was triggered by Rasmus Dahlin. Meier had enough puck to move to Joe Pavelski near the crease, and Pavelski's shot went under Hutton.

In the end, Hutton found a way to prevent the puck from entering.

Another key save: Although having scored only once, the second period was one of the best of the Sabers. They also dominated San Jose, 9-8, but they did a better job of holding the puck and limiting the chances of the Sharks. It was the type of defensive performance Buffalo needed after the Sharks had used their speed to beat defensemen in the first period.

Hutton bailed the Sabers when an error was made. His stop on San Jose winger Barclay Goodrow, with 9.1 seconds to go in the second period, kept the shutout intact.

Weird celebration: The goal of Ristolainen defies logic. Defenders are not supposed to pass the puck between their legs and go around the best of the league before scoring a goal. Still, that's exactly what Ristolainen did for Burns.

Ristolainen then celebrated the event by twirling the blade of his stick and acting as he held it in his bag.

Barely: With his success in Detroit, Tagus Thompson nearly scored three goals in two in the second period, when Dahlin found him in possession of the pass in the offensive zone, but Jones managed to save him. Thompson stumbled two minutes later when he was fired by Burns, but no penalty was called.

The misfortunes of the power game: The Sabers scored two power play shots in the second period and Kyle Okposo missed another try. San Jose came into play after killing 53 of his 56 previous penalties.

Even first: The Sharks dominated the Sabers, 13-7, in the first period, but Buffalo was not dominated for the first 20 minutes.

Casey Mittelstadt found Okposo with a centralized pass nearly nine minutes into the period, though Okposo did not manage to get a chance to score. Hutton beat his opponent with a glove at 17:31, when Sharks winger Marcus Sorenson received a pass near the top of the crease.

Good welcome: Evander Kane, who was playing his first match at the KeyBank Center since his exchange with the Sharks last February, was greeted with a message on the video board located above the center of the ice. The brief message elicited slight applause from the crowd, but Kane received a mixed response on his return.

When Kane touched the puck, there were some failures, even though they were not as loud as the cheers. Playing on the front row of the Sharks, Kane tried to impose his will early and even knocked over Mittelstadt in the first period.

Pilut Flight: Defender Lawrence Pilut is back with the Sabers after being sent back to the Rochester Americans on Friday. Pilut, 22, was recalled Tuesday afternoon as Marco Scandella was not available to play against the Sharks. During a pre-game interview on WGR Radio, the general manager, Jason Botterill, did not explain the reason for the latest scratch.

Without Scandella, Casey Nelson was paired with Nathan Beaulieu.

Following: The Sabers will train Wednesday at 11 am before leaving for a road trip of three games, starting with Tampa Bay. They will play Lightning at 19:30 Thursday.