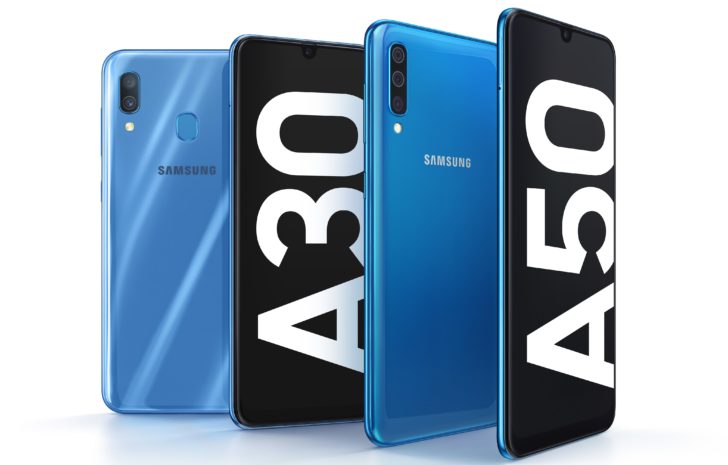 Samsung is not afraid to experiment with different types of notches in its midrange offerings – after trying everything from the perforator in the Galaxy A8S to the M10's OnePlus 6T sloped tear, in going through more traditional glasses in the A9. Two new devices have been announced today, the Galaxy A30 and A50, featuring teardrop – shaped notches from the Infinity – U design, revealed by Samsung last year. These phones will probably head to the Indian market in the coming weeks.

The Galaxy A50 is the first phone to run on the Samsung Exynos 9610 chip, announced last year. The camera seems to be focused on photography, with three rear cameras: a standard camera, a wide angle camera and a depth-of-field camera, which is rather rare in a mid-range smartphone. Samsung has opted for a built-in fingerprint sensor on the screen. There is no question of ultrasound, so it is probably optical. Glasstic was built by Samsung with the A50 and A30 devices. Although we do not know exactly what it is, we assume that it is more plastic than glass.

The cheapest of the two devices, the A30 has many common features with his brother, including the exact dimensions. The fingerprint sensor is facing back, which is an advantage if you ask me, and the camera and the internal equipment are decidedly low-end.

Although price and availability are not yet known, the phones will likely be launched in India on February 28th. With higher-than-average camera specs, big batteries, a headphone jack and expandable storage, these devices seem to be the type to be used by thirsty media teens. The Indian segment of mid-range smartphones is one of the most fashionable in the world, with Xiaomi and Honor taking a lot of market share in Samsung. If the price is right, these devices can be attractive value propositions.