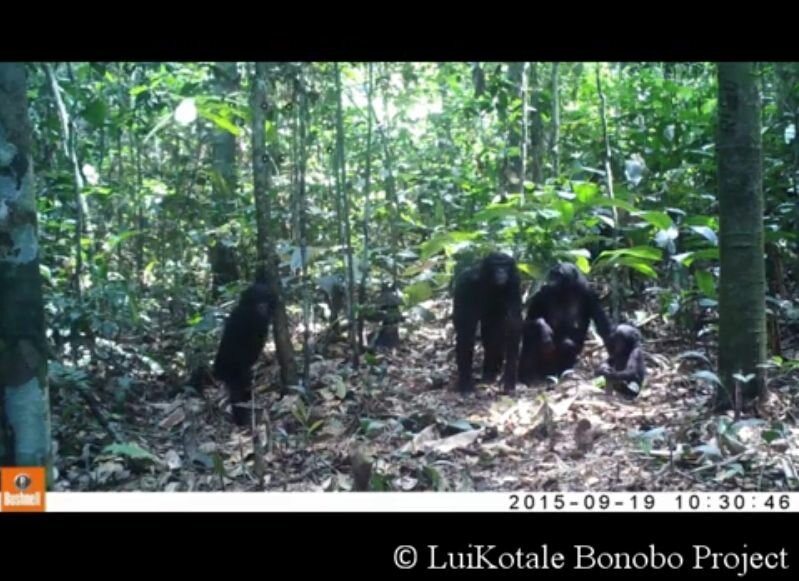 The researchers analyzed videos of remote camera-capturing devices placed in apes-populated forests in Africa to determine the response of wild monkeys to these unknown objects. The answers varied by species and even among individuals within the same species, but one thing has always been the same: the great apes have clearly noticed the cameras: they have caught them, have looked at them and have sometimes tried to bite them. The study appears on March 14 in the newspaper Current biology.

"Our goal was to see how chimpanzees, bonobos and gorillas responded to unknown objects in nature, primarily to determine whether the presence of search equipment, such as camera traps, had an effect on their behavior. and there were differences between the three great apes, "says Ammie Kalan (@ammiekalan), a primatologist at the Max Planck Institute of Evolutionary Anthropology in Germany. "We were particularly surprised by the differences in reactions observed between chimpanzees and bonobos." By acting as sister species and sharing much of the same genetic makeup, we expected that they react in a similar way to the camera, but this was not the case.

"Overall, chimpanzees were not interested in photographic traps – they seemed to barely notice their presence and were generally not embarrassed by them," says Kalan. "However, the bonobos seemed to be much more disturbed by photographic traps, they hesitated to approach and actively kept their distance."

Individuals within one species also reacted differently to the cameras. For example, great apes living in areas of high human activity, for example near research sites, may become insensitive to unknown objects and become indifferent to such encounters in the future. However, another member of the same species who is less exposed to strange or new objects may be more interested in them.

The age of the monkey plays a similar role. "The youngest monkeys would further explore photographic traps by fixing them longer," says Kalan. "Like human children, they need to gather more information and learn more about their environment, and being curious is one way to do it."

The range of responses shown by great apes and the complex differences between species and within a single species demonstrate the need for scientists to examine how animals will react to the presence of unknown surveillance equipment in their natural habitats.

"Variations within and between species in behavior with respect to unknown elements could be problematic when collecting accurate surveillance data," says Kalan. "To limit this effect, it would be useful to schedule a familiarization period, where wild animals can get used to new objects."

Despite this potential complication, the use of camera traps to monitor wildlife populations in the wild remains one of the most useful options. "Our knowledge tends to be limited by the number of groups or the number of populations we have been able to study, but the use of surveillance technology such as camera traps is an effective way of solving this. problem, "she says. "I think it's really interesting, from the point of view of behavioral flexibility, to see how wild animals react to these new technologies." I would very much like more researchers to study the answers to novelty surveillance surveys. "

Explore further:
Studying the interactions between species with the help of remote photographic traps