Scientists measure the exact edge between superconducting and magnetic states 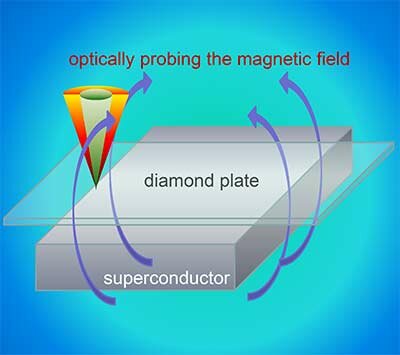 Scientists from the US Department of Energy's Ames laboratory have developed a method to accurately measure the "exact edge" or the beginning at which a magnetic field enters a superconducting material. Knowledge of this threshold – called the lower critical domain – plays a crucial role in solving the difficulties that have prevented the wider use of superconductivity in new technologies.

In condensed matter physics, scientists distinguish different superconducting states. When placed in a magnetic field, the upper critical field is the force at which it completely destroys the superconducting behavior in a material. The Meissner effect can be considered as its opposite, which occurs when a material passes into a superconducting state, completely expelling a magnetic field from its interior, so that it is reduced to zero at a small characteristic length (usually less than a micrometer) called the penetration depth of London.

But what happens in the gray zone between the two? Virtually all superconductors are classified in type II, which means that they do not show a complete Meissner effect at the larger magnetic fields. Instead, they develop a mixed state, with quantized magnetic vortices (called Abrikosov vortices), threading the material, forming a two-dimensional vortex lattice and significantly affecting the behavior of the superconductors. More importantly, these vortices can be pushed by the electric current, causing the dissipation of superconductivity.

The point where these swirls begin to penetrate for the first time in a superconductor is called the lower critical field, notoriously difficult to measure due to a distortion of the magnetic field near the edges of the sample. However, knowledge of this field is necessary to better understand and control the superconductors used in applications.

"The demarcation line, the value of the magnetic field depending on the temperature at which this happens, is very important, the presence of Abrikosov vortex significantly modifies the behavior of the superconductor," said Ruslan Prozorov, physicist of the laboratory Ames. expert in superconductivity and magnetism. "Many applications for which we would like to use superconductivity, such as electricity transport, are hindered by the existence of this vortex phase."

To validate the new technique developed to measure this demarcation line, Prozorov and his team probed three superconducting materials already well studied. They used a newly developed optical magnetometer, which takes advantage of the quantum state of a particular type of atomic defect, called nitrogen vacuum centers (NV), in diamond. The highly sensitive instrument allowed scientists to measure very small deviations of the magnetic signal very close to the edge of the sample, thus detecting the onset of vortex penetration.

In addition, theoretical calculations carried out with another scientist from the Ames laboratory, Vladimir Kogan, allowed to extract the lower critical field values ​​from the measured beginning of vortex penetration.

Explore further:
Reveal the mysteries of superconductors: the new reach of the team looks more closely