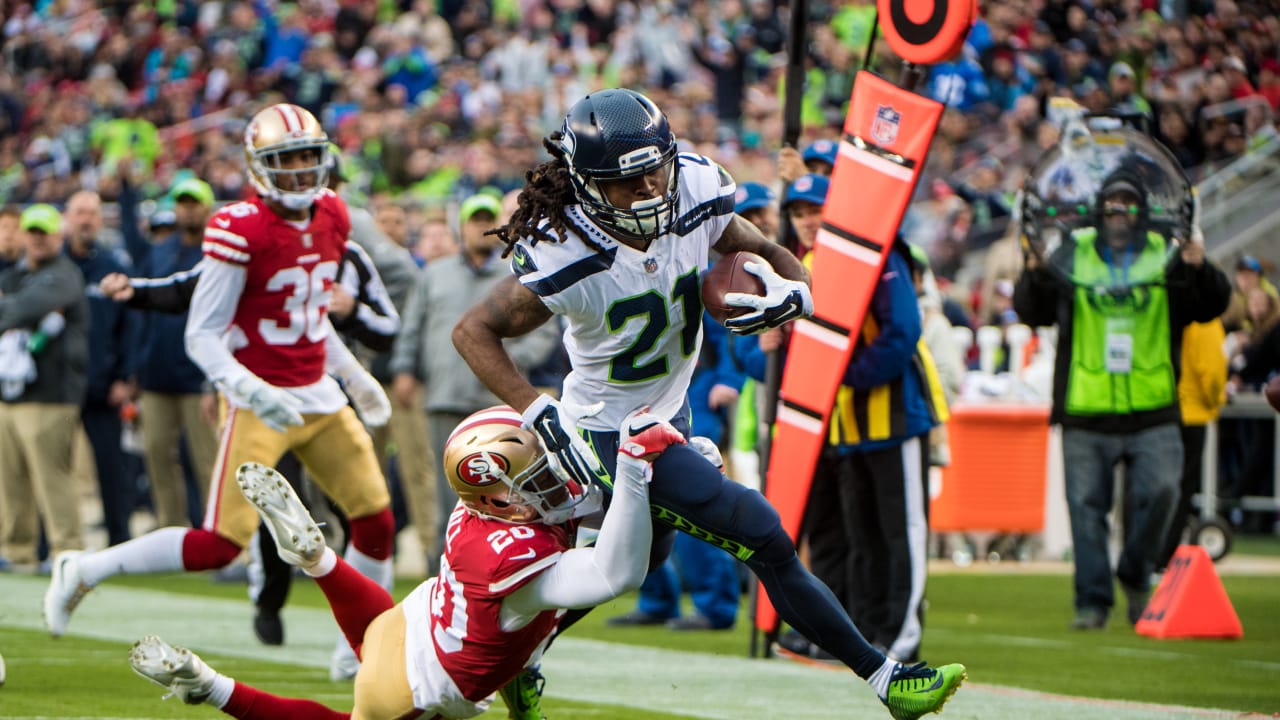 J.D. McKissic is about to make his debut in 2018 when the Seahawks will receive the 49ers on Sunday. The half-offensive was activated Wednesday on the reserve list of injured and added to the lineup of 53 players, which means that if all goes well to the training this week, he should be on the ground for the Sunday match he's not one of the seven inactive players. announced before the kick off.

McKissic, who was placed on the reserve after a foot injury before the start of the season, resumed training last week.

"J.D. is back," said Seahawks coach Pete Carroll. "We hope to get him through the week and if all goes well, we'd like him to participate this week."

McKissic participated in 13 games last year, starting one, and had 187 yards and one touchdown in 46 races. He also had 34 catches for 266 yards and two touchdowns. McKissic not only added depth to the run, he also played receiver and last year was one of Seattle's top performers on special teams.

Take a look behind the scenes with team photographer Rod Mar, who shares the Seattle Seahawks Week 12 game against the Carolina Panthers.

The Seahawks began their journey across the country late Friday afternoon, leaving their buses waiting to take their charter flight to Charlotte, North Carolina, for the game against the Panthers.

The Seahawks made a brief visit to the Bank of America stadium on Saturday, where they gathered for a while on the field before returning to their bus and returning to the hotel's team in Charlotte.

Quarterback Brett Hundley is flanked by an artistic fixture at the hotel's team in Charlotte.

On Match Day, catcher Malik Turner was well dressed as he headed for the buses.

On the morning of the match, quarterback Russell Wilson stopped to sign an autograph for a young fan going from the hotel to the bus.

Seahawks linebacker Shaquem Griffin stretches onto the grass at Bank of America Stadium in Charlotte before facing the Panthers.

Quarterback Russell Wilson oversees the field during his preliminary warm-ups.

These young fans had different interests during the match.

Back in the locker room, defensive linemen Quinton Jefferson and Nazair Jones changed their uniforms at the last minute before entering the field.

The linebacker Barkevious Mingo stays warm on a stationary bike shortly before the kickoff.

Quarterback Russell Wilson and center Justin Britt lead the Seahawks from the locker room to the field for pre-match presentations.

Offensive guard D.J. Fluker sits on the edge of the Seahawks while the home team, the Carolina Panthers, was introduced before the match.

Seahawks quarterbacks Russell Wilson of the Seahawks and Cam Newton of the Panthers greet each other in the middle of the field before the first draw.

In Carolina's second training, Nazair Jones put down after stopping Christian McCaffrey from the Panther for a three-meter loss, forcing the goalkeeper to score a goal.

Tyler Lockett of Seattle tries to gain 27 yards in the second quarter after catching a pass from quarterback Russell Wilson.

Doug Baldwin of Seattle jumped high but Russell Wilson's pass to him in the end zone was high.

Seattle's Chris Carson hit the end zone for a touchdown in the second quarter, led by blocks from the back side Tre Madden and center Justin Britt.

Back Seattle's Tre Madden dives into the end zone but is stopped in the second quarter.

US coach Pat McPherson speaks with his players Nick Vannett and Ed Dickson in the locker room at half-time.

Seahawks safety, Bradley McDougald uses his weapon to deceive a pass for Chris Manhertz, Carolina, in the end zone.

Seahawks midfielder Chris Carson fell back after trying to overtake Carolina's Eric Reid in the third quarter. Carson landed on his feet and tried to gain more distance after his turnaround.

Seahawk receiver David Moore looks for distance after carrying a 54-yard bomb by quarterback Russell Wilson in the third quarter.

Seahawks catcher Tyler Lockett looks up from a 12-yard touchdown pass from Russell Wilson, who was originally cut on the 1-yard line, but was replaced by a touchdown after a rereading.

Bobby Wagner and Bradley McDougald of Seattle played against Christian McCaffrey in the third quarter.

Nick Vannett of Seattle has room to run after the capture in the fourth quarter.

Seahawks receiver David Moor swaps his weapons with Captain Munnerlyn of the Panthers at a fourth quarter reception.

Seattle's Mike Davis goes up for the first time in the fourth quarter against the Panthers.

Seattle's defense forced Carolina's Christian McCaffrey to fumble on the goal line, but the ball escaped Carolina's stack, Greg Olson. The Seahawks caused five Panthers' fumbles and could not get any.

Seahawks catcher David Moore scores in a 35-yard pass from quarterback Russell Wilson to tie the game 27-27 with just over three minutes remaining.

Carolina kicker Graham Gano missed the 52-yard goal that would have given the Panthers the lead in the final minutes.

Seahawk linebacker Jacob Martin returns to the lineup after Panthers kicker Graham Gano misses a goal in the final minutes.

Seattle's Tyler Lockett is scrambling to get up after a 43-yard reception on Carolina's 10-yard line with only 45 seconds remaining and the Seahawks with no dead time.

After two knees and a quarterback to stop the clock, Seahawks kicker Sebastian Janikowski scored a 31-yard goal in the final game of the game to give Seattle a 30-27 victory on the road.

The Seahawks, including Ed Dickson, Duane Brown and Nick Vannett, celebrate with kicker Sebastian Janikowski after his decisive goal in the final game of the game.

Head coach Pete Carroll speaks to his team in the locker room after the victory.

With the victory, the Seahawks coaches gave up their first-class seats to veteran players such as Germain Ifedi and Russell Wilson.

Head Coach Pete Carroll sat behind his players and watched a movie before the plane took off from Charlotte for the long flight home.

Upon their return to the Virginia Mason Athletic Center, happy fans were waiting to host the team buses.

This ad will close in 3 seconds