Sepsis: New quick test "could save thousands of lives" 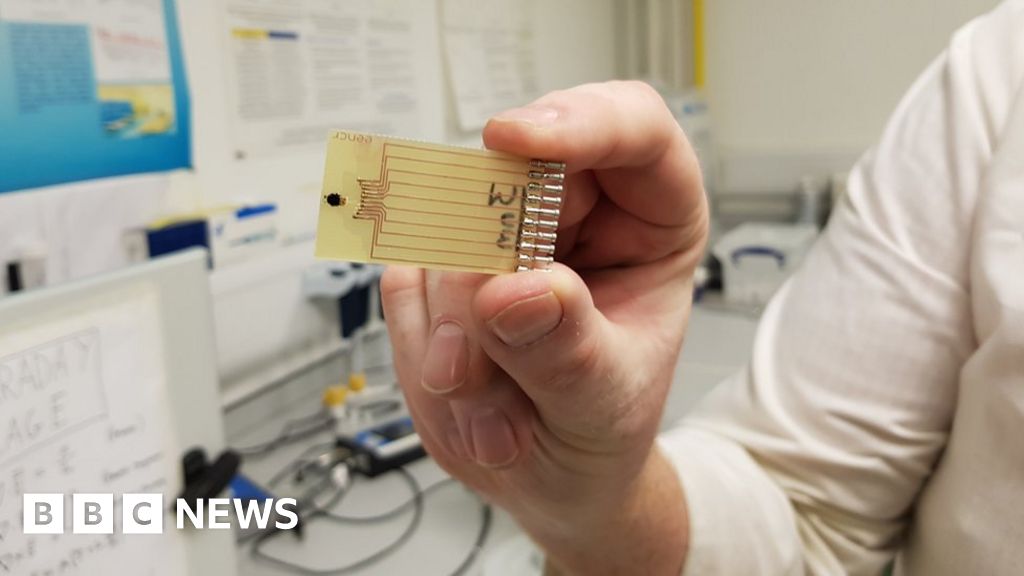 Researchers at the University of Strathclyde have developed a new rapid test to diagnose sepsis earlier, which they believe could save thousands of lives.

A micro-electrode device analyzes the patient's blood and gives the results in two and a half minutes.

Current diagnostic tests for sepsis can take up to 72 hours.

The researchers hope that the low-cost test can be used daily in three to five years.

An estimated 52,000 people in the UK die each year from sepsis, which is a serious complication of an infection.

The body's immune system begins to attack its own organs, which can be fatal.

It is difficult to diagnose and may initially look like flu, gastroenteritis, or chest infection.

Early diagnosis is essential because every hour that you delay antibiotic treatment increases the risk of death.

The diagnosis of sepsis is usually based on body temperature, heart rate, respiratory rate and often a blood test, which can take up to 72 hours.

The new test uses a device to detect whether one of the protein biomarkers of sepsis, interleukin-6 (IL-6), is present in the blood.

Dr. Damion Corrigan, who participated in the development of the test, said that IL-6 was one of the best markers of sepsis.

"At the moment, the 72-hour blood test is a very laborious process – but the type of test we are considering might be at the bedside and involve doctors or nurses who can monitor the levels of sepsis biomarkers themselves." . "

He said the test would work well in general practice and emergency rooms to quickly detect sepsis.

"It's not just about saving lives, many people who survive sepsis are suffering life-altering effects, including limb loss, kidney failure and post-traumatic stress disorder. "

The small device can be implanted and used on intensive care patients and can detect an increase in the level of sepsis.

Dr. David Alcorn, the project's clinical advisor and co-author of the Royal Alexandra Hospital in Paisley, said the tiny electrode could detect sepsis and at the same time diagnose the type of infection and the infection. antibiotic recommended.

"The consequences are enormous and it is extraordinary to be able to give the right antibiotic at the right time to the right patient.

"I can really see that this has a clear use in hospitals, not only in this country, but in the whole world."

The researchers have applied for a grant to develop a prototype and hope to generate commercial interest to advance it.

They estimate that it could be used within three to five years.

Ryan Sutherland, of Clackmannanshire, was found in a coma with sepsis, which had been misdiagnosed.

He had felt bad with a sore throat that had worsened, but a doctor had told him that it was a viral infection.

"During the week, the situation worsened and on Thursday, it became very serious.My wife took me to the doctor that night. I was really sick and could not move, but I was given an anti-illness injection and then I was sent home. "

A few hours later, he collapsed. He was taken to the hospital and suffered two cardiac arrests. His body was shocked by sepsis and his organs began to close.

After eight days in a coma, Ryan is awake and has almost completely recovered.

"Nobody mentioned sepsis, although looking back, I had all the symptoms," Ryan said.

"It's hard to diagnose, so if this test had been done, it could have made all the difference for what happened with me."

UK Sepsis Trust estimates that a faster diagnosis and treatment across the UK would save at least 14,000 lives a year from sepsis.

Dr. Ron Daniels, Chief Executive Officer of the Trust, said, "Any type of test that allows us to identify sepsis earlier, even before the onset of symptoms, could help save even more lives and move closer to our goal of ending preventable deaths from sepsis.

"Systems like this are so important that every hour before the administration of the right antibiotics, the risk of death increases.

"No test is perfect for identifying sepsis, so it's critical that we continue to educate clinicians to think of sepsis to encourage them to use such tests."