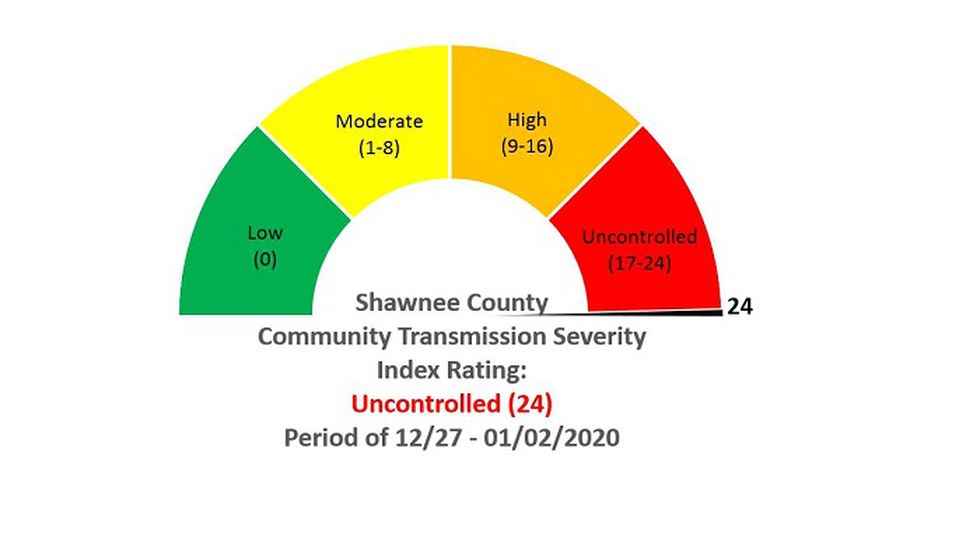 TOPEKA, Kan. (WIBW) – Shawnee Co. is back to the maximum number of 24 on its COVID-19 Community Transmission Scorecard.

Shawnee Co. health officials released the update Thursday afternoon, saying they were starting to see an increase in cases after the holidays.

It comes a day after the county saw a record number of cases of the virus reported to the health department, at 233.

The incidence trend index – which was in the “low” area as it was falling last week, was in the “uncontrolled” area in the latest report, with new cases up 43 percent from compared to the previous week.

Shawnee Co. also saw an increase in the percentage of tests coming back positive, from 9.9% last week to 12.8% this week. The occupancy rate of hospitals has also fallen to over 90%.

Health officials say 86% of cases in Shawnee Co. had no known source of infection, up from 92% a week earlier, but still in the “uncontrolled” area.

On the vaccination front, acting health official Dr Dennis Cooley said the county was working to vaccinate healthcare workers and those in the first phase of vaccination groups.

He said that faster vaccine deployment hinges on things like available space, personnel and assurance that no dose of the vaccine will be wasted.

He said as more and more people become eligible, it will be a group effort to make sure everyone gets their fix.

“These will be bigger numbers that we’re going to face, so it’s going to be a type of community-wide action that is going to allow us to introduce the vaccine to these groups,” he said.

Even as availability increases, he said people cannot forget about safety instructions.

On the issue of capturing vaccine administration data, as discussed by state health officials, Steve Anderson, of the University of Kansas campus in Saint Francis, said that the 20 staff vaccine administrators were trained to enter data.

Dr Kenagy said 100% of the vaccine administrators at Stormont Vail are also trained on this.