Shooting on Aurora: Five people killed by a man sacked in a business in Illinois 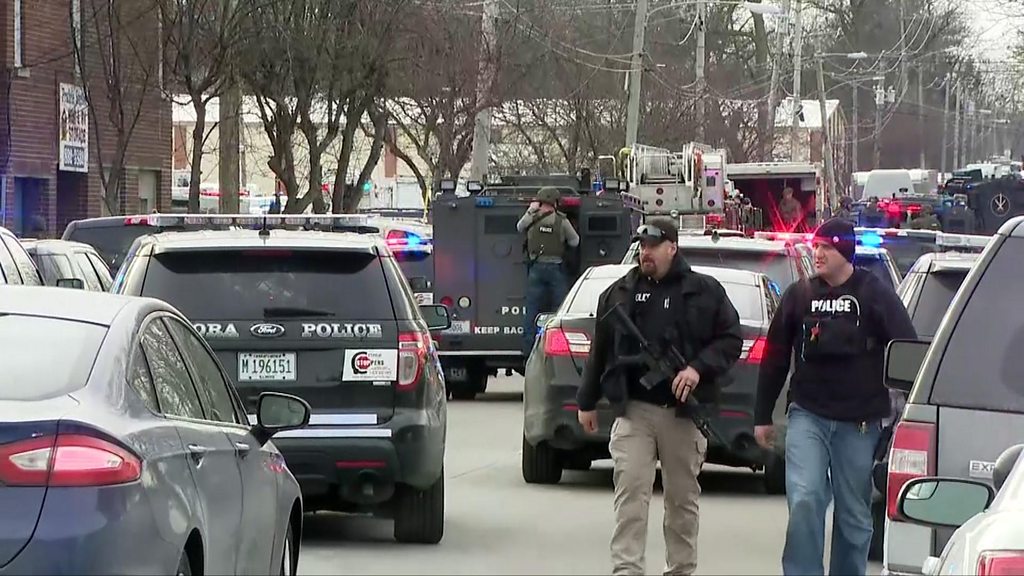 A man who was fired from his job shot dead five people and injured several others at his workplace in the US state of Illinois, police said.

The shooter was also killed during an exchange of gunfire with police officers. Five officers were shot and wounded.

The shooting took place in a manufacturing company in Aurora, a suburb located about 40 km west of Chicago.

Police named the 45-year-old gunman Gary Martin, who had been working for Henry Pratt for 15 years.

Aurora police chief Kristen Ziman said Friday night that they had information that "he was fired today."

The officers refused to speculate on a motive, but the Chicago Sun-Times newspaper reports that his family said he was "stressed" by being fired by the company, which manufactures valves for large water pipes. ;water.

What did the police say about the shooting?

Police were informed of an "active shooter" in an Aurora industrial park around 1:24 pm local time (1924 GMT), Ms. Ziman said at a press conference.

They were "immediately victimized" when they arrived on the scene, she said.

The police chief added that a rescue task force had been quickly deployed to the industrial park, accompanied by emergency services, including firefighters and paramedics.

Chris Southwood, of the Fraternal Order of Illinois Police, described as "brave" the Aurora officers present and who were shot down.

"[These] Officers and their colleagues did not hesitate to literally put their lives in danger today to stop further bloodshed, "Southwood said in a statement.

Of the five wounded officers, two were airlifted to nearby trauma centers.

The names of the five people who have been killed have not been published yet.

How did the witnesses describe the scene?

Witness John Probst, who works at Henry Pratt, had previously told broadcaster ABC7 that he had seen the attacker, whom he had recognized as a colleague.

He added that the man was carrying a handgun equipped with a laser sight, but this has not yet been confirmed by the authorities.

"One of the guys was in the office [and] he said that this person was shooting, and that he ran down and that he was bleeding a lot … I heard more shots and we just left the building, "said Mr Probst.

A nearby Capitol Printing employee told ABC7 that they were hiding in a closet when the shooting started.

Others, in neighboring buildings, said to be locked up.

Police in Aurora, Colorado, where a man opened fire in a crowded movie theater in 2012, quickly tweeted that the incident was not happening in Colorado.

Senator Tammy Duckworth, of Illinois, said, "It's a scary and sad day for all the people of Illinois and the Americans."

President Donald Trump has posted a message on Twitter offering his condolences to the victims and their loved ones.

The Friday incident occurred a day after the first anniversary of a shootout at a school in Parkland, Fla., Which killed 17 people.