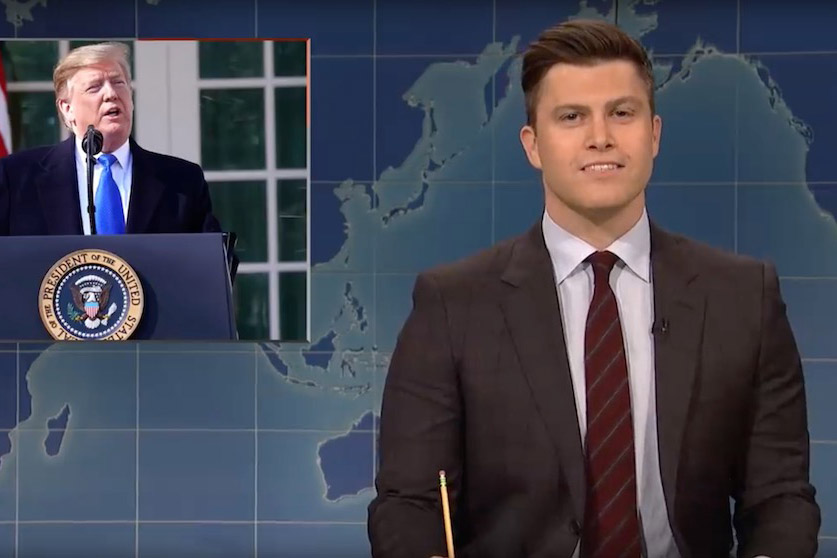 Saturday Night Live's Update of the weekend Anchors Colin Jost and Michael Che welcome President Trump's ludicrous press conference on Friday in which he announced that he had signed a national emergency declaration to fund the wall project for his wildlife project with Mexico.

Jost started the segment by pointing out how bizarre Trump's behavior was during the speech, saying that Trump needed a wall to stop the flow of drugs in our country and to show how much the problem of drug was serious. minutes to make an impression of cocaine. "

Then, of course, they moved on to the mockery of the press conference, where Trump explained, with a strange, sung voice, the tedious judicial process that would probably take place for its national emergency declaration is adopted. After playing the music video, Jost imitated Trump's quirky song and launched "Oh my God. This guy controls our nuclear weapons. "

Friday night on MSNBC Everything is with Chris HayesHayes showed a mix of points where Trump could have obtained almost exact wording to explain the potential court process of the statement. Wait … yes, you guessed it! He received it from Sean Hannity of Fox News.

Michael Che may have summed up the situation, lamenting the fact that he is tired, and everyone probably is, with the speech on the wall of the border: "I'm so fed up with tell jokes to Donald Trump. We've been mocking this guy and his dumbass wall for so long, I have to be honest, now I want to see the wall a bit. I mean I have never seen anyone so confident in such a bad idea. It's almost charming.

If only Che was right. Would not it be great to be able to laugh at most of this president's words and words? But for obvious reasons, we can not. Sad!