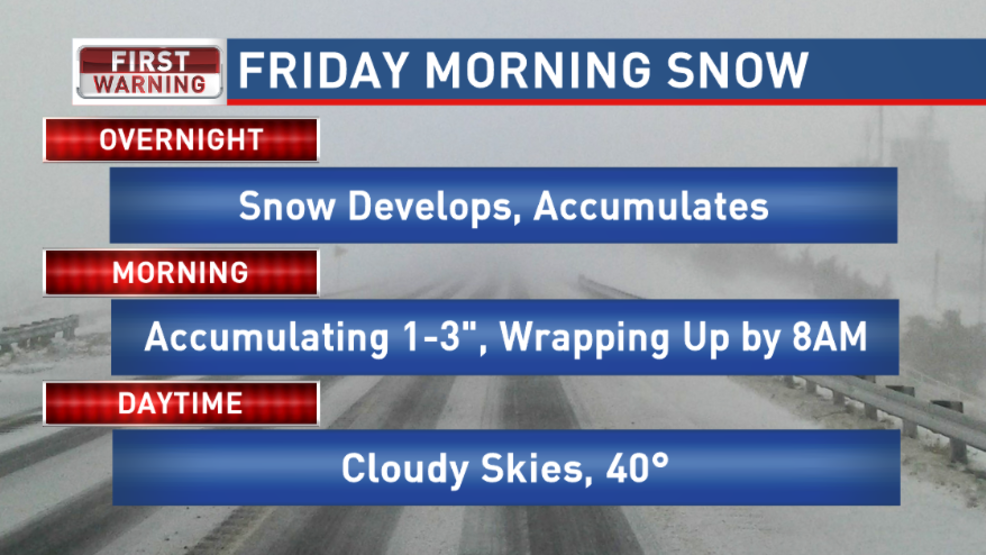 A low pressure wave will bring us southwesterly snow starting after midnight and ending around 8 o'clock.

Most areas can expect an accumulation of 1 to 3 "with higher amounts in the southern part south of route 30. Although it is not a big storm, the timing could not be much worse for commuters on Friday morning.

Allow extra time tomorrow morning and prepare for school delays and / or cancellations depending on the amount of snow in your area.

Saturday will be a little unstable with some rain and wet showers. Even though we do not expect accumulation for Saturday, the weather will be cloudy with some isolated isolated spots.

A much bigger storm that will retain moisture from the Gulf will arrive Sunday afternoon.

Like the majority of our winter storms, we will again be at the center of a battle between cold north air and warmer air blending south. At this point, there appears to be an accumulation of snow late Sunday afternoon / evening, before we see enough warm air for things to change to rain before the storm rises early Monday.

The trajectory of this storm could change again over the weekend, decreasing or increasing its local impacts.

As always, stay with us on the air, online and on all of our social media platforms, as we will continue to keep you informed of the latest forecasts so you can plan ahead!

Due to this very unstable weekend, Friday and Sunday are the 21-day CBS weather watch.

LOOK AT THE BEFORE:

The month of March announces itself as a lion, as below-average temperatures and peaks in the 30's will last most of next week!

Stay up to date with these links: