Sophie Turner on "Game of Thrones", "Sansa's End" and the "disrespectful" reactions of fans 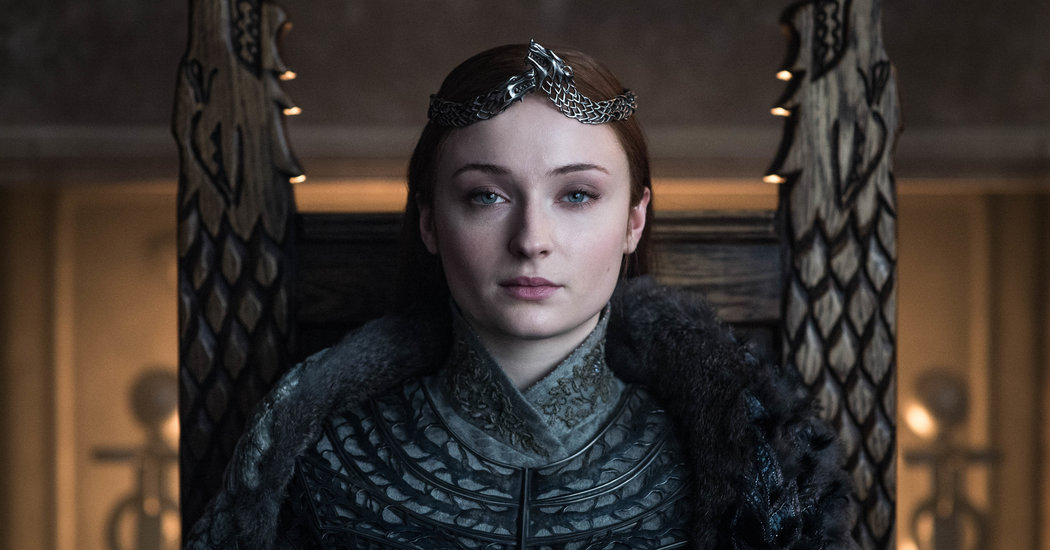 In the early days of "Game of Thrones," Sansa Stark was a feeble girl who dreamed of princes and princesses and one day wore her own crown.

In the end, she had one, although it came after more difficulties and losses than the young Sansa or anyone else could have predicted. Sansa had one of the most extreme trajectories in the series, from a callow girl to one of the most agile operators in history. It was not easy – she was manipulated by several puppeteers and her rape on the wedding night of season 5 inspired a national debate on the use of sexual violence by the series.

But Sansa survived and came to power – in one of the last scenes of the finale of the "Game of Thrones" series, she was crowned Queen of the newly independent North.

"It was a kind of perfect ending for her," said Turner Monday morning.

[[[[Read our summary of the final of the series.]

Turner briefly spoke on the phone from Berlin, where she promoted her new X-Men movie, "Dark Phoenix". She talked about the end of "Game of Thrones". The fans' reaction and Sansa's resilience did not have anything to do with his attackers, despite a moment that seemed to confirm it earlier this season. These are edited excerpts from the conversation.

How do you feel now that "Game of Thrones" is officially over?

I do not know. All this time, I felt like I was prepared, and now that the day is over and it's over, it's horrible. And I'm doing a press day for my new movie but everyone is asking me how I feel and just want to cry.

What did you think of the end?

I have not looked at her yet since I was alone when she came out and I really can not be alone watching her. But I read the script and played it, so I know what's going on.

King Bran the Broken. I guess it was unexpected but it makes a lot of sense. The best way for us to move forward in the future is to look at our past and try not to commit the mistakes we have made in the past. And that's the only person who knows everything, so it makes sense. It's like he's an incredibly fair leader.

The last meeting of the Starks was a moment of emotion. Was it the last thing you shot?

It is actually this scene where we chose Bran as king. It was five days in Seville and in the end we were exhausted. And we were wondering when we were going to finish, because we did not know if it would last three days, ten days or so long. So every time they cut, I started crying because I thought it was the end, and then I had to close it and take another hold, take another, and take another.

the fans reaction this season was much more negative than in previous seasons. Have you been surprised by some of the vitriol?

Honestly, I'm not surprised. People always have an idea in mind of how they want a show to end, and when it does not suit them, they start talking about it and rebelling.

What has always been amazing in Game of Thrones is the fact that there have always been crazy twists, starting in season 1 with Ned beheading. So, Daenerys becomes something of the crazy queen – it should not be such a negative thing for fans. It's a shock, for sure, but I think it's just because it did not work.

All these petitions and things like that – I find it disrespectful to the team, writers and filmmakers who have been working tirelessly for 10 years and have been filming for 11 months last season. Like 50 night something shoots. So many people have worked so hard, very hard, and people throw it in the trash because it's not what they want, it's just a lack of respect.

What did you think of the end of Sansa's story?

I liked it. This is the only place where she really feels safe. This is the place where she is most able to govern. She would be a fair and loving housekeeper, and that's what she strives to do for this whole series: go home, protect her home. And finally she has that.

There was this scene where Sansa explained how much abuse she had suffered made her strong. It seemed to almost credit the abusers to make you who you were.

I obviously think that this is not a message to broadcast. But I do not think that was the intention. It was that she was strong despite of all the horrible things she has lived, not because of them. She has been resilient from the very beginning and despite all these terrible things that happened to her, she kept that resilience. Sansa at the base is resilient, brave and strong, and it has nothing to do with her attackers.

Over time, what do you think will be the most memorable memory of your move to Game of Thrones?

Wow, I do not know. One of the things I will remember most is the camaraderie and family we all created from the show. Every night, we all met – staff members, actors, everyone – at the bar and had a drink, chatted and laughed, and it was just a family. I have never felt such a connection with a group of people in my life; I know they will stay my family forever. I've had father figures on the show, like the cameraman, the handles and the accessories. Fraternal figures – hundreds of them.

We were stuck in mud and rain for 10 years together. It's hard not to connect with these people – I think that's what I'll remember most.