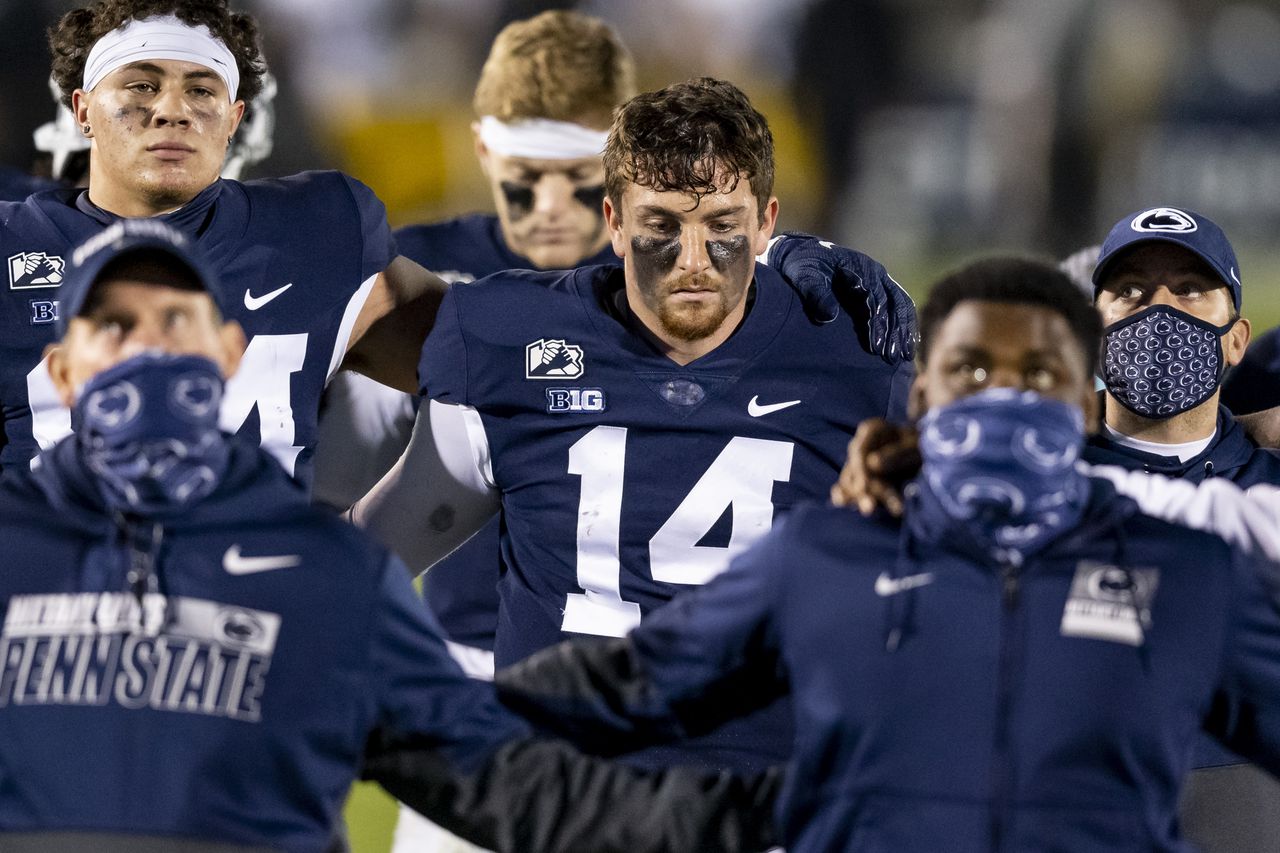 Only three post-game readings today. There are so many functional responsibilities on this team in each unit that you could go on and on. What’s the point?

Instead, I tried to take a step back and look at some general issues that arose out of Penn State’s 41-21 loss to Iowa.

1. We all wanted to compare the starting quarterback. But that’s what can happen.

I guess hardly anyone disagreed with James Franklin’s decision to cast Will Levis on Saturday after Sean Clifford’s performance in Nebraska. It was obvious. Clifford just didn’t hit the passes he needed, he held the ball too long and then lost it when he hit it or threw it to the other team. His confidence was shot. And Levis created a spark that lasted a long time in the game and nearly completed a three touchdown comeback.

But we warned before what kind of dynamics a change in QB can trigger if the substitute does not maintain his throw. And that’s what happened against Iowa. After leading an impressive TD practice in the first quarter in which he ran 7 times for 44 yards, Levis got caught and started making the same mistakes as Clifford. He also hung on the ball too long in places, ended up being touched for vulnerable moments and spat the ball out.

By the time he got to 31-7, James Franklin decided to try and get back to Clifford. And it worked for two possessions. The original starter hit a pair of big shots from the field, the Lions scored twice quickly and suddenly made a game 31-21. The Cincinnati junior appeared to embrace a certain surrender of what there was to lose – until it became a game again.

Clifford threw too low and his deflected pass was spotted deep in his own camp. The PSU defense kept Iowa in the basket. And when State arrived at Iowa 26 with just 34-21 with a shot at making it a one-scoring game, Clifford telegraphed a flat pass and he was kicked off by Iowa lineman Daviyon. Nixon, for the galloping 71-yard touchdown return. that froze the game.

So what are you doing now? The two QBs broke trust. Neither can believe their position is secure. It’s a total mess. And if you think Ta’Quan Roberson is sort of the answer, don’t. He never took a college photo. You insert it into this maelstrom?

A few mind-blowing decisions popped up over the course of the afternoon / evening, of little consequence, as it turned out. Iowa’s dominance of the melee has essentially made it a no-fight until it’s too late.

But I think one of them was proof of growing desperation on the part of the coaching staff. And others were just bad decisions in which the exhausted nature of the team came to the surface.

I had no problem with the two options for the fourth run, 17-7 at the end of the second quarter. These are the chosen pieces that I did not understand.

On 4/1 at Iowa 39, the Hawkeyes had grouped six defensemen between Penn State tackles. Still, Levis opted for an A-gap keeper than ever had prayer and lost a yard. It was as if he was sticking to a pre-fabricated decision out of order.

The 4/2 at Penn State 49, three minutes later, you could have justified a punt as Iowa dominated the Lions’ running game. But, OK, as long as the game’s ready to move the sticks.

Levis didn’t go for a high percentage possession pass, but instead threw a looping pitch well down the left sideline to a well-covered Jahan Dotson who had a small chance of success and fell incomplete. Iowa took the giveaway, swept and scored before halftime for a 24-7 lead.

Then there was the 2 point conversion attempt, down 31-19, with: 07 left in the third quarter. Clifford’s move to Keyvone Lee turned out to be connected to the devil. But the risk / reward then made no sense. Just kicking the extra point makes a TD-2P-FG difference, while missing pointer 2 forces you to score two touchdowns, a major potential impact on morale at this point. The percentage of play there is just to hit the point, get it in the 11s and keep the hope going.

Finally, the decision to throw a punt, down 34-21 with 3:26 remaining – even though it was 4th / 17 at Penn State 43 – wasn’t much of a percentage play. Yes, it seemed to work when the PSU defense made a save, Franklin used his three timeouts and got the ball back with 2:53. But you have to start taking downline hits almost immediately to have hope. And Clifford was still looking for crossings and under when Nixon made his fatal pick-six.

It’s as if these decisions are all made in some sort of fog instead of being rationally analyzed on the fly. But that’s what happens when you lose often. It’s not easy to find your rhythm again.

3. This program has a legitimate attitude from the team to the fans.

Let’s just call it what it is – spoiled rotten.

Yes, the Nittany Lions have had a lot of bad breaks due to injuries, withdrawals and even a career-ending medical issue. But then, after two losses, he practically stopped fighting.

The players think they are better than them. Fans think the program is better than it is. And then what you basically had from everyone was a refusal to get excited even for a 7-2 or 6-3 season. It was not worthy of Penn State.

Well you know what? It wasn’t just Indiana that came out of the Big Ten’s Second Division and acted like the season matters. Rutgers, Illinois and Maryland play like they think it’s fun just to compete. I’d much rather watch Greg Schiano’s 1-4 Scarlet Knights right now than most college football teams. Because they obviously don’t care.

Minnesota, after taking a 17-point lead in Maryland sandwiched between Michigan and Iowa obliterations, somehow found a reason to hang on, got a giveaway and beat Purdue on Friday. evening.

Michigan, despite all their embarrassment at being sacked by Wisconsin, rallied behind a first-year quarterback with conviction and seemed to find a reason to play in their 3 OT win at Piscataway last night.

I have now watched every team in this league fight after serious setbacks and overcome them except Penn State. I’ve seen underdog fans get excited just for wins that wouldn’t mean league or CFP crowns, just a chance to celebrate for a day.

If Penn State football is worth it, it might be necessary for everyone to stop acting like kids. To recalibrate in the moment, the present, and stop pretending, the only reason to have the games is a championship.

A goal? Sure. The whole and the end? No. Because right now this irrational sense of right is dragging the Nittany Lions further into a bottomless abyss.

• Is it really as bad as Penn State football? And should Franklin’s future as a coach be at stake?

• Penn State’s 2020 freefall continued against Iowa, and the Lions’ future remains in doubt due to the program’s QB issues.

Kelly Oubre gets an introduction to Steph Curry’s Warriors culture