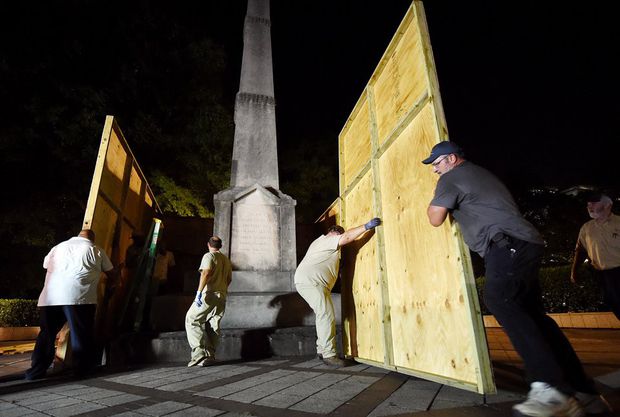 Judge Michael Graffeo, Jefferson County Circuit Court Judge, made the order on January 14 shortly before midnight. This order comes more than a year after the state sued the city for violating the Alabama Memorial Preservation Act, a law banning local governments from moving historic monuments on public properties in place for 40 years or more. The law also prohibits the renaming of buildings and streets with historical names in place for at least 40 years.

"I am pleased that the Alabama Supreme Court has accepted the state's request to stay the Circuit Court's decision," Marshall said in a statement Friday night. "We believe that the case law of the United States Supreme Court clearly shows that the Circuit Court erred in overturning the Alabama Memorial Preservation Act. We therefore asked the Supreme Court of Alabama to preserve the status quo with respect to the Confederate soldiers' monument in Linn Park until the Court ruled on our appeal.

"The suspension of the Supreme Court allows the Alabama Memorial Preservation Act to remain in effect until the Supreme Court decides the appeal on the constitutionality of the law. We continue to argue that the Circuit Court erred in ruling that the US Constitution grants cities the right to freedom of expression that they can enforce against the state. For more than a century, the US Supreme Court has ruled the exact opposite, recognizing that "a political subdivision, created by the state to better order the government, does enjoy 39, no privilege or immunity under the federal constitution, which it may invoke in opposition to the will of its creator. "We are eager to present these arguments to the Supreme Court of Alabama."

The suspension was filed at 4:23 pm Friday.

Governor Kay Ivey signed the 2017 Alabama Memorial Preservation Act on May 24, 2017. The law prohibits local governments from moving historic monuments onto public properties that have been in place for 40 years or more . It also prohibits the renaming of buildings and streets with historical names in place for at least 40 years.

In August 2017, several months after the adoption of the law, Birmingham Mayor William Bell ordered that the monument to Confederate soldiers and sailors at Linn Park be covered with plastic and then plywood, while the lawyers might consider legal options. While some asked that the statue be demolished, Bell said that he would not violate the law to remove the monument.

The Attorney General's office in Alabama promptly filed a lawsuit against the city for violation of state law, but Birmingham City lawyers have said the law on the preservation of memorial was "vague and ambiguous". Counsel for both parties stated at a hearing in April 2018 that: Protected monuments can not be "altered or otherwise disturbed".

Graffeo said the law violated the 14th amendment because the state was demanding at least $ 25,000 fine from the city and was also trying to control what the city could build on Linn Park, but the The law does not provide for any formal procedure. The law allows cities to request a derogation for certain structures, but Birmingham can not ask for this derogation because the Linn Park monument is over 40 years old. This part of the law is "excessive and unreasonable," said the judge.

Read the order below: