The artificial intelligence inspired by the brain in robots 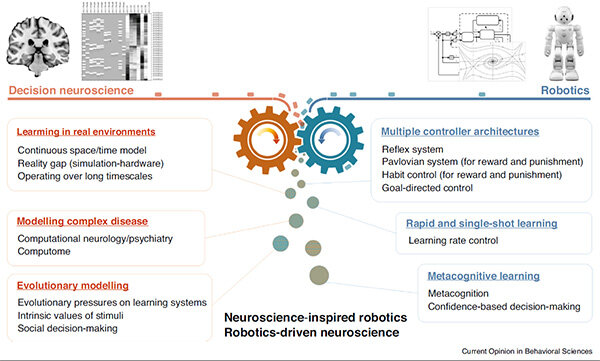 Research groups from KAIST, the University of Cambridge, the Japan National Institute for Information and Communication Technologies and Google DeepMind say our understanding of how Humans make smart decisions now has reached a critical point in which robotic intelligence can be dramatically improved by mimicking strategies that the human brain uses when we make decisions in our daily lives.

In our rapidly changing world, human and autonomous robots constantly need to learn and adapt to new environments. But the difference is that humans are able to make decisions based on unique situations, while robots always use predetermined data to make decisions.

Despite the rapid progress made in building the physical capabilities of robots, their central control systems, which govern how robots decide what to do at a given time, are still inferior to those of humans. In particular, they often rely on pre-programmed instructions to direct their behavior and do not have the hallmark of human behavior, that is, flexibility and the ability to learn and adapt quickly.

Applying Neuroscience to Robotics, Professors Sang Wan Lee of the Department of Bio and Civil Engineering at KAIST and Professor Ben Seymour of the University of Cambridge and the Japan National Institute of Information Technology and communication have proposed a case in which robots should be designed based on the principles of the human brain. They argue that the intelligence of robots can be dramatically improved by mimicking the strategies that the human brain uses in everyday decision-making processes.

The problem of importing human intelligence into robots has always been a difficult task without knowing the computational principles allowing the human brain to make decisions – in other words, how to translate brain activity into computer code for the "brain" robots.

However, researchers now argue that, following a series of recent discoveries in the field of computational neuroscience, there is enough of this code to effectively write it into robots. One of the examples uncovered is the "meta-controller" of the human brain, a mechanism by which the brain decides how to switch between different subsystems to perform complex tasks. Another example is the human pain system, which allows them to protect themselves in potentially dangerous environments. "Copying the brain code for these could dramatically improve the flexibility, efficiency and safety of robots," said Professor Lee.

The team argued that this interdisciplinary approach would bring as many benefits to neuroscience as it does to robotics. The recent explosion of interest in what is behind psychiatric disorders such as anxiety, depression and addiction has given rise to a complex set of sophisticated theories that are difficult to test without some kind of platform. form of advanced situation.

Professor Seymour explained, "We need a way to model the human brain to determine how it interacts with the real world to determine if and how the different anomalies of these models cause certain disorders. if we could reproduce anxiety behavior or obsessive-compulsive disorder in a robot, we could then predict what we need to do to treat it in humans. "

The team hopes that the production of robotic models of different psychiatric disorders, like the current use of animal models by researchers, will become a key technology of the future in clinical research.

The team also said that humans and intelligent robots could also benefit from the other benefits: learning, acting and behaving in the same way. In future societies in which human beings and robots live and work with each other, the ability to cooperate and empathize with robots could be much greater if we feel that they think like us. .

Professor Seymour said: "We might think that having robots with human traits to be a little impulsive or overly cautious would be a detriment, but these traits are an inevitable byproduct of the l? Human intelligence, and it turns out that it helps us understand human behavior as human. "

The framework for achieving this artificial intelligence inspired by the brain has been published in two journals, Robotic science January 16th and Current Opinion in Behavioral Sciences February 6, 2019.

What is the value of a robot life?

Provided by
Korea Institute of Science and Technology (KAIST)