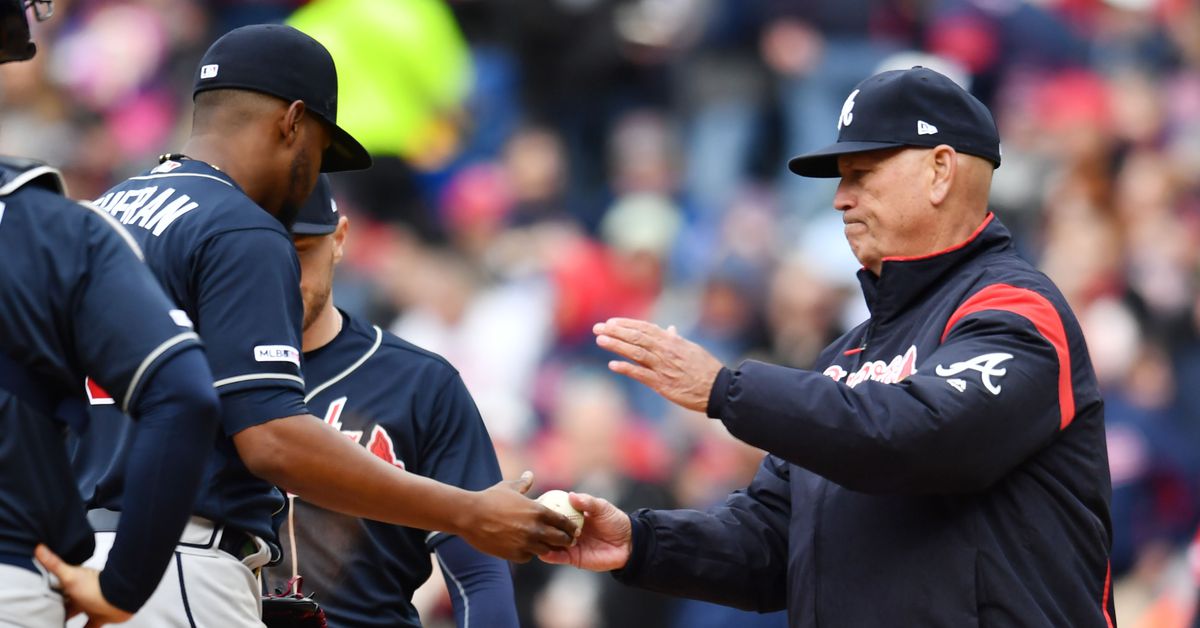 If you were hoping to have a fun filled baseball day this Saturday, I'm sorry to inform you that the first match of today's doubles match has taken place. do not the game you were looking for. The Indians conceded a fifth inning on six shots in Atlanta and won, while the Braves lost two shots before remaining virtually silent for the rest of the game.

Julio Teheran and Corey Kluber took part in this match, and neither of the two players really did well at the end of the match. Tehran looked a lot like his old character, missing over and over again and again and again to the very leftist Cleveland formation, and offering a ton of steps in the process. Kluber was sometimes unusually wild and had been scored for two home runs, so even though he had won a pretty easy win, he had not accumulated exactly the low FIP. Regarding the relief for the Braves, it was Wes Parsons' turn to rule, as he aggravated a poor fifth inning, doing nothing positive against the Cleveland hitters he faced.

The Braves actually hit first against Kluber, while Freddie Freeman and Ronald Acuña Jr. did two walks in the first. Nick Markakis then crushed an attacker in the center, scoring Freeman first. But Dansby Swanson ended the small gathering with two. The defense of Tehran and the Braves still allowed this race. Tehran organized an outing for Jose Ramirez (the good), then allowed Jason Kipnis to be beaten to breaking point. Ozzie Albies tried to play the ball by his side and managed only to deflect it, putting the runners to the corners. Then, in an extremely annoying way, Tehran prompted Carlos Santana to absolutely steal a suspended ball for an eternity in the shallow left … but not long enough for Acuña to really recover. It was a ball with a probability of touching 1%, but it fell out of the way of an Acuña that slipped and created equality. Tehran then started another goal, but withdrew the other two batters to keep the match at one point each.

Both pitchers worked a scoreless second, although Tehran included a four-run run to Max Moroff, who entered the game with a -67 wRC + and it's not a number I invented. The Braves pushed their second run into the third. Ozzie Albies scored twice as she put a ball in the middle to finish the heat and was third on a slow roll by Josh Donaldson. Freeman began to look, and Acuña was plunged into a Kluber pitch to charge the bases. Markakis then climbed onto a shot to the left that resulted in a sacrificial volley, but Swanson returned to Kluber to quell an exchange again. Tehran immediately opened the way for his return to the mound and tied the third leg following Carlos Santana's choice. But then, providence hit, while Jake Bauers stopped inexplicably with the race related to the third and the absence. Tehran put the ball down and fired to bring the runner back to retirement. An attack and a burst ended the round, with the Braves still ahead 2-1.

After Kluber worked another 1-2-3 run, Tehran managed to avoid making anyone walk in the fourth quarter. But that was hardly a positive development, as Max Moroff (career of 54 wRC +) gave him a free-kick to equalize with a tying goal. Kluber went 1-2-3 again to the top of the fifth, then things became grim.

Until then, Julio Teheran had pitched four innings with a 4/4 K / BB ratio and one allowed circuit, but he was fired for the fifth time, against the heart of Cleveland's heavy and left-wing formation. It seemed like he could get away with it and thwart a little the spirit of the TTO, but fate had other ideas. Tehran began by eliminating Kipnis, and then a single from Santana did not sound the alarm. A Bauers strike put Tehran in an ideal position to survive the setting. But he did not do it. Greg Allen, who is part of the -51 wRC + (it's also a figure I did not have), doubled over Freddie Freeman, scoring Santana's goal. (Santana had managed to take second place on a stolen base on a previous pitch, which … yes, that match.) Now lagging behind, Tehran has always stayed inside and a single from Tyler Naquin raised the score to 4-2. Even if Cleveland's only right-handed stick was Kevin Plawecki's, manager Brian Snitker had seen enough and raised Tehran in favor of Wes Parsons …

… who completed the self-immolation in the sleeve. Parsons was walking towards Plawecki and almost hit him on the head with a throw. He allowed a single to Moroff (5-2). He allowed another single to Leonys Martin (6-2). He walked Jose Ramirez, then a ball passed Brian McCann at 7-2. Jason Kipnis then chose to score (8-2). That's all for Parsons: three hits, two walks, no drummer in retirement, boring, whistling, etc. Jesse Biddle came in and finally retired from Santana to end the frame.

Kluber continued to negotiate (another 1-2-3), completing a series of ten retired brave men. Biddle then actually worked an effective run (what a left-handed madman can do against a group of left-handed hitters), with a 1-2-3 and two strikeouts. The Braves got two points that allowed McCann and Matt Joyce to be back-to-back against Kluber to start the seventh goal, which does not end up losing all meaning and still broke the FIP's Kluber, but the right-hander ended the frame and his party by withdrawing Donaldson strikes. Jacob Webb came into play for the bottom of the seventh and had his own two-notch hilt, although, unfortunately, he entered a starting round.

The rest of the game was very calm. The Braves are again in order in the eighth, this time to Nick Wittgren. Josh Tomlin has returned the favor of his former team at the bottom of the table. Brad Hand allowed Charlie Culberson to win a two-hit single, but Johan Camargo, a toe-kicker, flew to end the game.

The Braves fell under .500 for the first time this season since April 4th. Fortunately, they have a chance to come back to .500 later in the evening, while Touki Toussaint gets entwined with Trevor Bauer.