The California lawsuit against Trump's emergency wall is very conservative. 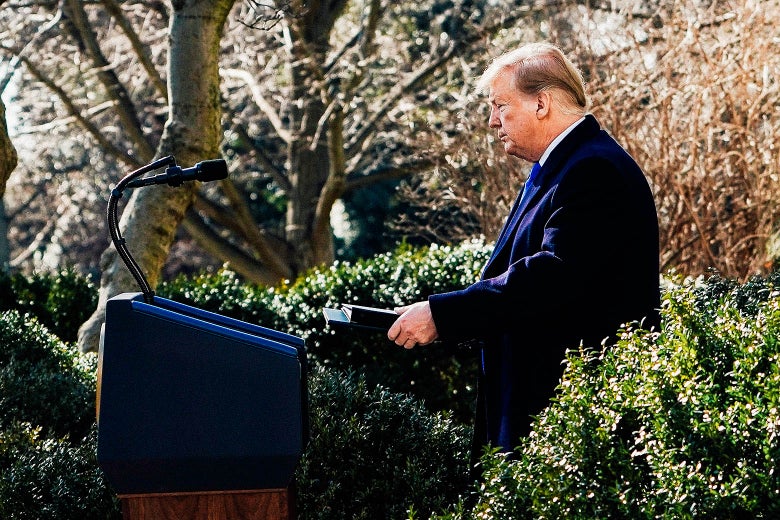 Last Friday, President Donald Trump declared the state of national emergency at the southern border, adding that it was not one of those emergencies he "needed" to declare then say a lot of other things. As he predicted, a coalition of 16 states filed a federal complaint late Monday to seek a preliminary injunction barring the president from following through on his emergency declaration. As he had also predicted, this action had been brought in federal court in California.

What Trump did not predict – and probably would not have been able, given his tenuous understanding of the legal limits of executive power – is that Monday's trial is, after all, extremely conservative. The lawsuit does not rely on judges' empathy for vulnerable immigrants and does not allow one to know whether Trump's racist motives could undermine the legality of the statement. Instead, he relies on the old principles of separation of powers to show that Trump had bypassed the Constitution. It is not an equality or dignity litigation, but an essential element that underlies the process of constitutional law making. He is ugly and formal, concise and not romantic. And if the Conservatives of the Supreme Court have any consistency, Monday's trial should convince them to block Trump's wall.

The 16 plaintiffs base their 57-page complaint on a basic argument: the president violated the fundamental principle of the separation of powers by thwarting Congress's desire to achieve its political preferences. Trump, according to the lawsuit, "used the excuse of an illegal immigration" crisis "to declare a national emergency and redirect federal funds for drug enforcement, military construction and security initiatives. 39, enforcement of the law for the construction of a wall in the United States- Mexican border. "There is" no objective basis "for this statement, as Trump himself admitted. far, "

Much of the complaint details funding that will be diverted from the National Guard and state-sponsored drug interception projects to build the wall. The complainants say that this gives them the right to sue in federal court because the president redirects money that would serve their interests to a project that will not do it. But states are not just unhappy because they would have preferred the money to be used for military construction and law enforcement. They are unhappy because, they say, money has been removed from these projects and their citizens to be used illegally.

These problems should to be a catnip for SCOTUS"Conservative the judges.

This lawsuit joins a series of others already filed by surveillance groups. Although they all argue that there is no real emergency situation at the southern border, this is not the heart of their complaint. Instead of asking the courts to question Trump's intent, these challengers are asking them to decide if Trump had the power to act in the first place.

The answer, they say, is no. The presentation clause is simple: for a bill to become law, it must be passed by both houses of Congress and then presented to the president for approval. Yet Congress never passed a bill authorizing and funding the border wall requested by Trump. He has never presented such legislation to the President for his signature. This is the case of Civics 101. Whatever authority the National Emergency Act assigns to the Speaker, a federal law can not take precedence over the Constitution. The executive can not use funds that Congress does not have appropriate. He can not change the laws himself to create money for pet projects. Trump asked Congress for a large sum of money for the construction of a border wall; The Congress provocatively and provocatively said no The National Emergency Law does not give it sufficient leeway to violate congressional orders.

These problems should for conservative SCOTUS judges, especially Judge Neil Gorsuch. In his first-ever dissent at the Supreme Court, Gorsuch extolled the virtues of this blank constitutional system. "If a law needs to be repaired," he wrote, "there is a way to do it under the Constitution. This is called legislation. Gorsuch continued:

Certainly, the requirements of bicameralism and presentation are real and the process can be extended. But the difficulty of making new laws is not a problem in the constitutional conception: it is the goal of conception, the best is to preserve freedom.

A year later, in his opinion rightly celebrated Sessions DimayaGorsuch hammered the same point again. "Under the Constitution", he wrote, "the adoption of new laws restricting freedom is supposed to be a difficult undertaking, the product of an open and public debate between a significant number and various elected representatives. " The courts give up their responsibilities when they ignore the "division of labor" of the Constitution between branches of government. These "structural concerns" form the foundation of American constitutional governance, the ultimate goal of which is to preserve "orderly freedom". These new challenges demonstrate that Trump bypasses these "structural concerns" and undermines "orderly freedom."

There is also a clear precedent for states to meet this type of challenge. When President Barack Obama tried to postpone the expulsion of undocumented parents from US citizens and legal residents, the Conservatives of the Supreme Court ruled in favor. They accused the president of legislating from the oval office and acting without congressional approval. And they managed to block this program after Texas and 25 other states filed lawsuits on the basis of a claim that the hypothetical harm would be the most fragile. In this case, Obama was only applying a law allowing him to define "national policies and priorities in the fight against immigration", and not to build a border wall at the border, in defiance of Congressional agents. If a president can violate the cardinal principle of the separation of powers by stretching congressional instructions and states can sue him, he will surely commit the same constitutional sin against those states by failing to comply with congressional orders.

The litigants have learned, after two long years of debate on the travel ban, that the five Conservatives have little or no interest in sounding out what is in the heart of the president. They simply do not care about what may or may not be an excuse, or whether tweets should count. They want a clinical analysis of formal constitutional authority and presidential power. California c. Trump offers what on a silver platter: Whatever the President can do – whether his name is Obama or Trump – he can not take funds that Congress has refused to appropriate and use them to thwart the will of Congress. No tears, no drama, no search for the soul of the executive. Just the cornerstone of the Framers plan.