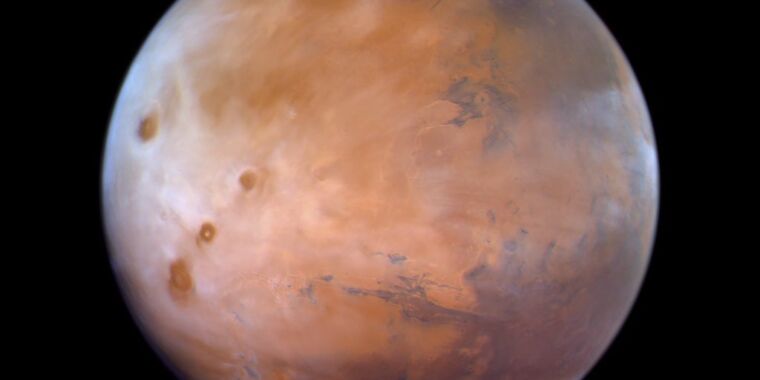 Since arriving on Mars eight months ago, the Emirates Mars mission has quietly begun to provide intriguing scientific data on the Martian atmosphere and its weather conditions.

Named “Hope”, the probe is in a relatively high orbit, varying in altitude above Mars from 20,000 to 43,000 km. This vantage point allows the spacecraft to see an entire hemisphere at a time. For much of this year, the Hope spacecraft has therefore trained its multiband imager, infrared spectrometer and ultraviolet spectrometer on Mars to collect data on the planet’s atmosphere and the resulting weather conditions.

The project was funded by the United Arab Emirates and the spacecraft was built in collaboration with several American universities, including the University of Colorado Boulder. The aim was to inspire young Emiratis to pursue studies in mathematics and science and to train some of them through the resulting collaborations. The probe was launched in July 2020 on a Japanese rocket.

One of the goals of the mission was to freely share the resulting data, and as a result, the mission recently opened a science data portal. Anyone can sign up to access raw images and data collected by the probe in the past, with new datasets being released every three months, with no embargo. The mission, the first Arab probe to be sent to Mars, is expected to operate for at least two years in orbit around the Red Planet.

The Hope probe has already made some interesting discoveries. For example, scientists expected to observe a fairly uniform distribution of oxygen throughout the Martian atmosphere. Although the planet’s thin atmosphere is mostly carbon dioxide, molecular oxygen is a trace gas. According to the Hope probe’s observations of oxygen in the upper atmosphere, the concentrations vary by more than 50 percent. Similar variations have also been observed in carbon monoxide.

Scientists are now struggling to understand these variations, which do not fully fit with current models of the Martian atmosphere.

The probe also closely tracks temperatures on the surface of Mars, acting as if it were the first weather satellite to orbit the Red Planet. While there are many considerations to take into account when determining the initial landing sites for humans on Mars – lack of rock outcrops and hazards will be prominent among them – understanding local weather conditions will also be. a valuable tool for mission planners.

Following the success of its mission to Mars, the United Arab Emirates Space Agency recently announced that it is planning an even more ambitious probe that will fly over Venus in the late 2020s and then travel to the Belt. asteroids between Mars and Jupiter. There, the probe will observe up to seven asteroids before attempting to land on one of them in 2033.

For this mission, the country will partner again with US universities to help develop the spacecraft and further strengthen collaboration with educators in the Middle East.

“Our goal is clear: to accelerate the development of innovation and knowledge-based enterprises in the UAE,” said Sarah bint Yousif Al Amiri, Minister of State for Advanced Sciences and President of the UAE Space Agency. united, in a press release. “It cannot be done in steady state; it requires leaps of imagination, faith, and the pursuit of goals that go beyond prudence or method.”