The first humans hunted monkeys and squirrels in the rainforest 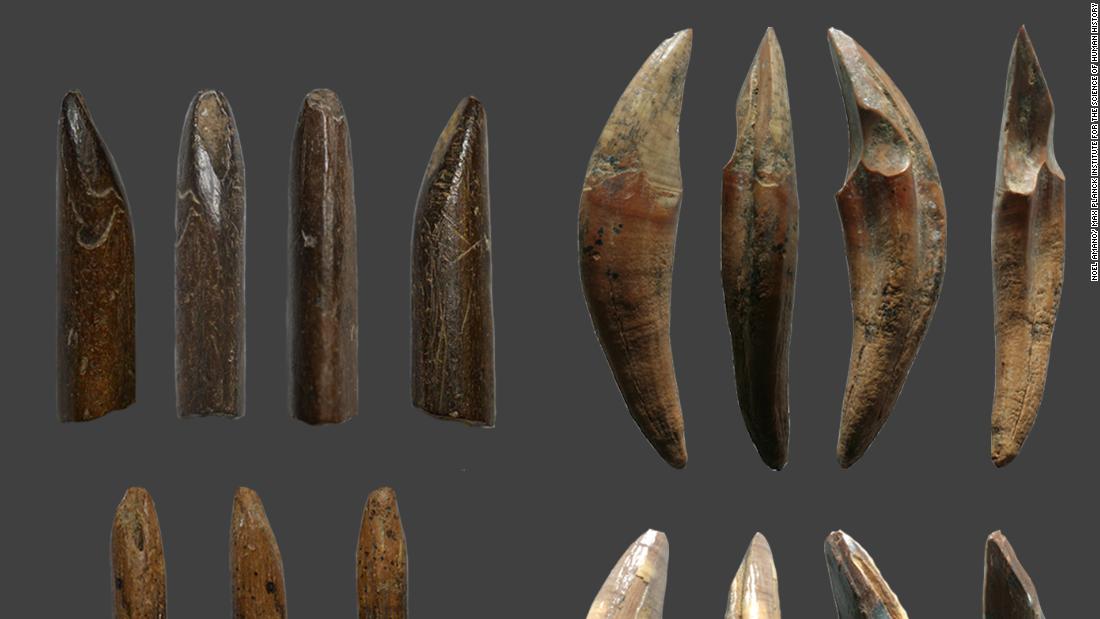 Examples of tools made from bone and monkey teeth recovered in the upper Pleistocene layers of the Fa-Hien Lena cave in Sri Lanka show that early humans were using sophisticated techniques to chase the monkeys and squirrels.

Footprints believed to belong to Neanderthals were found in the sand dune of Catalan Bay.

Two of the fossil specimens found in Korea had reflective eyes, a characteristic still visible under the light.

Artistic illustration of Mnyamawamtuka moyowamkia, a mid-Cretaceous long neck titanosaur recently discovered in Tanzania. The vertebra of his tail has a unique heart shape, which contributed to his name. In Swahili, the name translates as "animal of the Mtuka with a tail in the shape of heart".

The oldest evidence of mobility dates back 2.1 billion years and was discovered in Gabon. The tubes, discovered in black shales, are filled with pyrite crystals generated by the transformation of biological tissues by bacteria, found in layers of clay minerals.

Researchers have recently studied climate change in Greenland as it occurred during the Viking epoch. Using lake sediment cores, they discovered that it was actually warmer than expected. They studied on several sites, including a twenty-first century reproduction of the Thjodhild Church on the estate of Erik the Red, known as Brattahlíð, in present-day Qassiarsuk, Greenland. .

Here is an artistic illustration of Antarctica, 250 million years ago. The newly discovered fossil of a dinosaur parent, Antarctanax shackletoni, revealed that reptiles lived within the diverse fauna of Antarctica after massive extinction.

The bone points and pierced teeth found in the cave of Denisova date from the early Upper Paleolithic. A new study establishes the chronology of the cave and it sheltered the first humans known 300 000 years ago.

The illustration of this artist shows a marine reptile similar to a platypus hunting at dusk. This duck-billed animal was the first reptile to have exceptionally small eyes that probably forced it to use other senses, such as the tactile sense of its duckbill, to hunt its prey.

Although it is difficult to spot, the researchers found patches of lapis lazuli pigment, called ultramarine, in the dental plaque of the lower jaw of a medieval woman.

A Neanderthal fossil, left, and a modern human skeleton. Neanderthals are generally considered to have a high incidence of trauma compared to modern humans, but a new study reveals that head trauma was consistent for both.

The oldest figurative work in the world of Borneo dates back to 40,000 years ago, when man lived on what is now known as the third largest island on Earth.

The tooth of a Neanderthal child, 250,000 years old, contains an unprecedented record of seasons of birth, breastfeeding, illness and exposure to lead during the first three years of his life.

The illustration of an artist shows giant nocturnal elephant birds in search of food in the ancient forests of Madagascar during the night. A new study suggests that now-extinct birds were nocturnal and blind.

Kebara 2 is the most complete Neanderthal fossil recovered to date. It was discovered in the Israeli cave of Kebara, where other Neanderthal remains were discovered.

The oldest intact ship wreck in the world was discovered by a research team in the Black Sea. It is a Greek merchant ship dating back to 400 BC. The vessel was inspected and digitally mapped by two distant underwater vehicles.

This fossil represents a new fish resembling a Jurassic piranha with sharp, pointed teeth. He probably fed on the fins of other fish.

The fossil skull of the young Diplodocus called Andrew, held by Cary Woodruff, director of paleontology at the Great Plains Dinosaur Museum.

Two small bones from Ciemna Cave in Poland are the oldest human remains found in the country. The condition of the bones also suggests that the child has been eaten by a big bird.

The artist's illustration shows the newly discovered dinosaur species, Ledumahadi mafube, foraging in the lower Jurassic of South Africa. Heterodontosaurus, another South African dinosaur, is also visible in the foreground.

A red cross pattern dating back to 73,000 years was drawn on a silicate flake, which forms when sand and gravel are brought together, and was found in a cave in South Africa.

A series of Middle Neolithic pottery, including typical Danilo ware, figule and rhyta, was used for meat, milk, cheese and yogurt.

These four dinosaurs show the evolution of alvarezsaurs. From left to right, Haplocheirus, Xiyunykus, Bannykus and Shuvuuia reveal jaw lengthening, tooth reduction and changes in the hand and arm.

Eorhynchochelys sinensis is an early turtle that lived 228 million years ago. He had a beak without teeth, but no shell.

The bones of the leg of a 7 year old kid, recovered from an ancient Roman cemetery, show a flexion and deformities associated with rickets.

The famous statues of Easter Island, called moai, were originally whole characters partially covered over time. They represent important ancestors of Rapa Nui and were carved after the establishment of a population on the island 900 years ago.

The researchers are located at the Aubrey Hole 7 excavation site, where cremated remains were recovered at Stonehenge for investigation. New research suggests that 40% of the 25 people buried at Stonehenge were not from there – but they probably carried rocks from West Wales and helped build them.

The foot is a part of a skeleton part of a 3.22 million-year-old skeleton of an Australopithecus afarensis child nicknamed Selam.

According to a new study, the impact of asteroids causing the extinction of dinosaurs has also destroyed the world's forests. This illustration shows one of the few terrestrial birds that has survived the toxic environment and massive extinction.

The remains of a cutthroat rhinoceros help the researchers to date the arrival of the first humans to the Philippines. They found a complete 75% rhinoceros skeleton that was clearly cut up, with 13 of its bones bearing cutting marks and areas where bones were struck to free the spinal cord, at the Kalinga archaeological site on the island. 39, Luzon Island.

This is just one of 26 people found on the site of the fifth century massacre on the Swedish island of Öland. This teenager was found lying on his side, suggesting a slower death. Other skeletons found in homes and ring streets at Sandby Borg show signs of sudden death by blows to the head.

The skeleton of a young woman and her fetus were found in a brick casket dated from medieval Italy. His skull shows an example of neurosurgery and his child was extruded after his death into a rare "coffin birth".

This part of a whale skull was found at the construction site of Calaveras Dam in California, with at least 19 other people. Some pieces are 3 feet long.

A stone age cow skull shows a trepanation, a hole in the skull created by humans in the form of a surgical procedure or an experiment.

On the left, a fossilized skull of our Homin ancestor, Homo heidelbergensis, who lived 200,000 to 600,000 years ago. Right, a modern human skull. Hominins had sharp brow ridges, but modern humans developed mobile eyebrows as their faces became smaller.

On the left, a 13,000-year-old footprint found in the sediments of Calvert Island off the Canadian Pacific coast. On the right, a digitally enhanced image, showing the details of the imprint.

A team of researchers studied a central platform located at Star Carr in North Yorkshire, England, and delved into past events related to climate change at the site of the Middle Stone Age. The Star Carr site houses the oldest evidence of carpentry in Europe and structures built in Britain.

Researchers have been studying Archeopteryx fossils for 150 years, but new X-ray data reveal that the bird-like dinosaur may have been an "active pilot."

This wall with paintings is in the cave of La Pasiega in Spain. The scale of horizontal and vertical red lines is over 64,000 years old and was made by Neanderthals.

These perforated shells were found in the sea cave of Cueva de los Aviones, Spain, between 115,000 and 120,000 years ago. Researchers believe that these served as a body ornament to Neanderthals.

The oldest human fossil ever discovered outside of Africa has been found in Israel. This suggests that modern humans have left Africa at least 50,000 years earlier than expected. The upper jaw, with several teeth, was found in a prehistoric cave site.

This is a structure unearthed at the north end of the Grand Plaza, Teposcolula-Yucundaa, Oaxaca, Mexico. The researchers investigated a "plague" cemetery associated with a devastating epidemic of 1545-1550. A new analysis suggests that salmonella caused an epidemic of typhoid fever.

Paranthropus boisei, a precocious human ancestor, had a small brain and a broad, flat-like face. He is best known for his big teeth and muscular muscles.