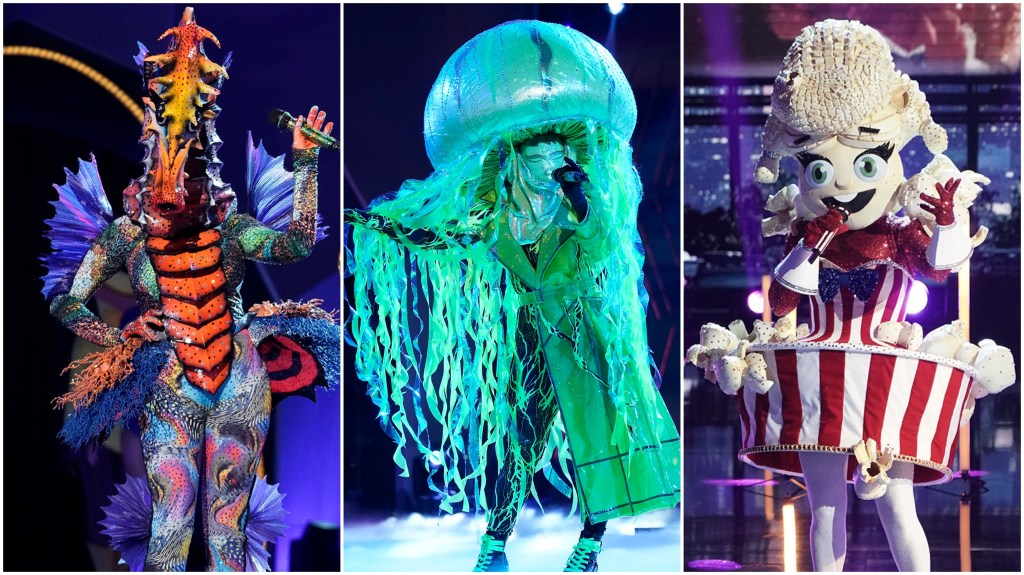 SPOILER ALERT: Don’t read ahead if you haven’t watched the two-hour Season 4, Episode 10 of “The Masked Singer,” which airs December 2 on Fox.

It was a mega unmasking on Wednesday as Fox’s “The Masked Singer” revealed three celebrities in a special 2-hour semi-final: singer / songwriter Tori Kelly (as the Seahorse), music icon Taylor Dayne (as Popcorn) and Olympic snowboarding gold medalist Chloe Kim (as Jellyfish) were all knocked out.

Thicke and Scherzinger knew Seahorse was Kelly, and Robinson chose that choice as well. Jeong thought it was Christina Aguilera, while McCarthy Wahlberg named Halsey.

In her last performance as Seahorse, Kelly sang “That’s What I Like” by Bruno Mars. Having already addressed “Only Girl (In the World)”, by Rihanna; “My heart will continue”, by Céline Dion; and “… Baby One More Time” by Britney Spears, Kelly said she couldn’t wait to use “The Masked Singer” to do something different.

“I realized it could be kind of a fun opportunity to show an alter ego and do things that I wouldn’t normally do in my own music,” Kelly told Variety. “I’m known to have a guitar in front of me so maybe this is an opportunity for me to do a choreography and be a little taller as a character and so that’s exactly what I tried to do.” do with the Seahorse. “

Kelly said the costume was a bit of a challenge – and that it also revealed something she didn’t realize about her performance style.

“I do certain movements with my head and when I hit a certain note,” she says. “It’s very subconscious so I didn’t realize I was doing it until I put on this mask and I’m a little more restricted from moving my head. That was sort of the main challenge, making sure that I was coordinated and that I didn’t fall off or anything like that.

Kelly said she checked online and saw that her fans immediately knew it was her. “I just thought it was so hilarious, like I couldn’t hide from my fans at all,” she said. “They knew there was no getting around it.

Kelly said “The Masked Singer” changed her in ways she never expected. “I kind of came away feeling like I had a lot more confidence in who I was as a performer,” she says. “I’m known as just a singer which is good, but I think being on the show gave me the confidence to see myself as a global artist. I went there and worked more on the stage and did things that I never do. I will definitely take the Seahorse with me to my other shows. I really think it changed me for the better. So I’m grateful for “The Masked Singer”. “

Dayne, meanwhile, while Popcorn sang “Better Be Good to Me,” by Tina Turner, after previously performing “What About Us” by Pink; “Falling”, by Harry Styles; and “Domino,” by Jessie J. She also knew her distinctive voice wouldn’t fool some of the panelists or her fans.

“We knew it was going to be a challenge and yet at the same time they had many recognizable voices on the show,” she said. “So we chose songs from male artists, and then we also played with keys, and yet at the same time they have a show to produce. We’ve gone pretty far, I think a lot of people guessed it and a lot of people didn’t. It worked pretty well.

Dayne said she was interested in joining “The Masked Singer” after some of the panelists’ names verified her final season as potentially the Night Angel. “When they called me up for this season, we were like, let’s go, then let’s really give them something to talk about,” she said. “The costumes were incredibly stimulating in their own way, but my costume was everything I could have dreamed of. I loved being Miss Popcorn, she’s the most hopeful, prettiest, cutest, liveliest, most loving, and Betty Boop.

“The Masked Singer” was more of an engagement than Dayne expected, but she gives the show high marks for the experience. “It was a hell of a trip,” she says. “I love challenges. I think once a year you have to dive into a real depth. Something to challenge your mind or body, four weeks 12 weeks anyway. Something to do that, shake it up, your perspective has to change something. “

Meanwhile, Kim came to “The Masked Singer” having never performed music on such a stage. But she’s loved the show ever since her parents were hooked on the original Korean version.

“I remember they were completely addicted to the show,” Kim said. “Every time I called my parents or asked them what they’re doing, they’d say, ‘We’re looking at the masked singer, it’s so cool, we think it’s that celebrity or that celebrity.’ I didn’t really know what it was. And then I watched it with them one day, and I was like, it’s amazing. I love the concept. “

Kim and her family regularly host karaoke nights, which ultimately paid off in her ability to sing on “The Masked Singer”. “When I had guesses from female singers like Charli XCX, I was really flattered by that just because I had no experience on stage or on stage and singing in general,” she said.

New this season, the show’s panelists are also vying for a “Golden Ear” trophy based on their first impressions of each masked artist – and at the start of the episode, McCarthy Wahlberg led with three, while Thicke and Scherzinger had two points each, and Jeong had zero points so far.

For Popcorn, Scherzinger’s first impression was Diana Ross; everyone chose Tina Turner. No one scored on it.

For Jellyfish, Thicke’s first impression was Addison Rae. McCarthy Wahlberg said Daisy Ridley; Jeong thought it was Yara Shahidi; and Scherzinger said Sofia Richie. No one has raised any other point here either.

For Seahorse, Jeong’s first impression was Fergie, Thicke chose JoJo; McCarthy Wahlberg wrote Halsey; Scherzinger said Maren Morris. The panelists were 0 to 3 in their first impressions, with no one entering the final with more points.

This means that for the final all that’s left is Crocodile, Mushroom and Sun. Here’s how they fared in Week 10, “The Semi-Finals – The Super Six”: