The NASA Ames computer center gets a major upgrade | New 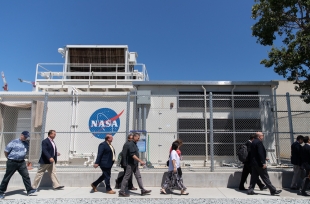 To power a future mission on the Moon and a day on Mars, NASA faces an almost insatiable demand for more computing power.

Every day, NASA's leading supercomputer Ames, with its 250,000 processors, uses complex models to inspect a constellation of searches. His computer simulators test every inch of a spacecraft fuselage while modeling global ocean trends and scanning remote star systems for signs of planets. Nearly 1,500 research projects and simulations are run simultaneously by NASA's supercomputer nervous system, and demand for data is expected to continue to grow rapidly.

"High performance computing has become a powerful and indispensable tool for advancing many national missions and priorities," said Eugene Tu, director of NASA at Ames. "Supercomputers have been recognized at the highest levels of our government as essential to the country's prosperity, national and economic security, industrial production, engineering and scientific progress."

But as in any large data center, maintaining NASA's supercomputing facilities is an ongoing challenge. The cost to power and cool thousands of computer nodes is huge, requiring today about 5 million gallons of water a day and about 6 megawatts of electricity, or about the equivalent of 6,000 households.

Now, NASA officials say that they have found a new way to dramatically reduce these costs. In a successful new prototype, space agency officials said they had found ways to build smaller, "modular", highly compute concentrators that could handle natural winds from the shoreline of the bay.

This move represents a break with the traditional design of consolidating an ever increasing number of processors into tightly controlled facilities. NASA officials described the new modular processing units as "plug and play" add-ons that will easily adapt to them as technology advances and their computing needs increase.

"We are the first to promote this concept on this scale," said Bill Thigpen, head of NASA's Advanced Computer Branch. "This gives us tremendous flexibility – if NASA needs more computing power, we can add it almost immediately."

On Thursday, Thigpen led a group of journalists on a visit to the Aitken supercomputer, one of the first of these new modular engines built in Ames. The facility was located at the back of NASA's Ames Research Center, right next to the Pleiades supercomputer, which has been the flagship product of the agency's IT division for years.

Thigpen led the visitors to a concrete field of one acre completely empty, with the exception of a white building, of an almost indeterminate size, the size of a studio . It looked like a utility shed. It was Aitken, he said.

Going to the side of the building, Thigpen demonstrated the cooling system, which was blowing air through a copper screen through which water flowed. It was essentially a more advanced version of a radiator or cooler, he said, noting that his results would change the game. By improving this simple design, NASA engineers have reduced energy and water consumption by more than 90 percent, saving hundreds of thousands of dollars, he said.

A significant portion of these savings was due to dry coastal winds that could be easily cooled. The baylands were like a "nirvana" for a supercomputing facility, said Thigpen.

Entering the interior of the Aikten white building, Thigpen made his way between the server's large knots, trying hard to chat over the roar of all the fans and equipment. Currently, the room contains just over 46,000 processors, but this capacity may soon increase.

Outside, about 12 large yellow boxes were painted on the empty concrete plot, indicating where future mini supercomputers like Aitken would eventually be built. As soon as NASA needed more processing power, Mr Thigpen said his team could quickly build an identical facility for a relatively low cost of around $ 35 million.

"In just two months, I could double what we have here." he said. "By doing only one after the other, we can take advantage of the progress of the computer and all the improvements made to the facilities."

NASA officials said they were eager to share their lessons on building more efficient supercomputers with all interested private parties.