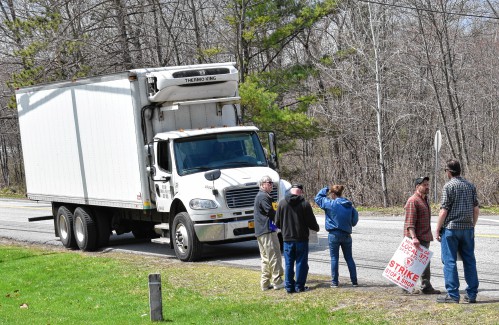 GREENFIELD – Stop & Shop's striking workers had a dispute with a delivery truck early Friday afternoon and finally convinced the driver to leave without making delivery.

The Recorder was present just after noon when the truck parked in the front parking lot of the store. Strikers clashed with the driver, who then turned back on King King Road and tried to get to the back car park, where deliveries were made.

The strikers followed the truck and stood in front of it to force the driver to park before he could reach the rear entrance. The head of the dairy industry, Bill Flynn, went to the taxi window to negotiate with the driver.

Strike organizers quickly discovered that the driver was not associated with a union. Union drivers agreed to abide by the Stop & Shop strike and will not make deliveries, the workers said.

When workers prevent deliveries, this puts pressure on food vendors, who in turn will urge Stop & Shop to resolve the strike as soon as possible, "said Melissa May, representative of the Union of Workers of the United States. Food and Commerce 1459.

Councilor Doug Mayo, who vocally supported the strike, was present when the truck arrived. At one point, he told the driver that the city council had voted in favor of the strike.

At 13:30 a police officer arrived. The union organizers, the store managers and the officer negotiated, and then at 2 am the truck left.

The unionized workers did not know if the truck would leave for good or go back and try to deliver again. Store managers did not leave the loading docks.

By 5 pm the truck had not returned, said Shop Steward Ricky Butynski; but the workers had heard that another delivery was underway.