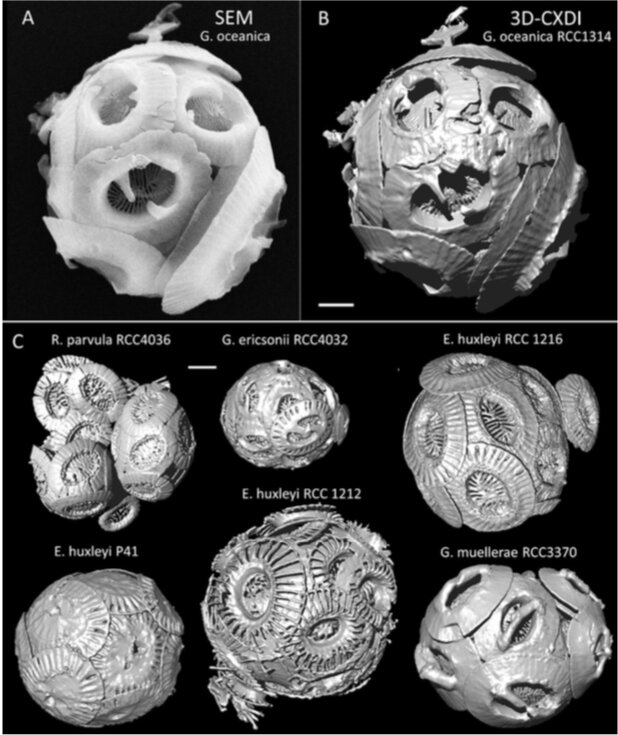 Coccolithophores are microscopic marine algae that use carbon dioxide to grow and release carbon dioxide when creating their miniature calcite shells. The current increase in carbon dioxide emissions could therefore seriously affect these abundant and tiny planktonic microorganisms. Scientists from the CNRS, the University of Le Mans, the Sorbonne University, Aix-Marseille University and the ESRF, the European Synchrotron, have revealed the 3D nanometric structure of their calcite shells, opening new perspectives to assess the role of these tiny microorganisms in the global carbon cycle. A study published in Nature Communications shows new correlations between their mass and the size of the organic matrix around which nucleation and growth of calcite occur.

You've probably never heard of it, but you may have inadvertently noticed coccolithophores on satellite images of the sea when a beautiful milky-turquoise color field appears in surface waters, which indicates the presence of billions of these unicellular calcified phytoplankton.

About a third of the carbon dioxide released into the atmosphere by human activities is absorbed by the oceans, where it reacts chemically and makes water more acidic. This, in turn, prevents some calcifying marine organisms, such as starfish, sea urchins, corals and coccolithophores, from building their shells or skeletons.

When tiny organisms have an impact on the global carbon cycle

Coccolithophores, unicellular organisms much smaller than the pixels of your computer screen, play an active role in the carbon cycle. They live in the superficial layers of the sea, where they use light for photosynthesis, thus fixing CO2 in organic matter leading to a decrease in dissolved CO2 in the ocean. Unlike other photosynthetic phytoplanktons, coccolithophores produce calcite (ie, CaCO3) in the form of tiny platelets called "coccoliths". Calcification by coccolithophores uses bicarbonate (HCO3) of seawater and releases CO2. When coccolithophora cells die, coccoliths and associated organic matter sink slowly into the seabed, contributing to carbon storage in the deep ocean reservoir. Although they are tiny organisms, coccolithophores play a key role in the global carbon cycle because of their very high abundance in the oceans.

Unveiling of the mass of coccoliths

Understanding how environmental factors influence the degree of calcification of coccoliths is therefore of considerable interest. The crucial question is to be able to accurately estimate the mass of the calcite envelope of these microorganisms. "We have developed a method to estimate the mass of individual coccoliths using automated light microscopy," explains Luc Beaufort, a CNRS scientist. "Although this technique is very useful for measuring the mass of a large amount of coccoliths over a short period, it was crucial to evaluate the accuracy of these measurements by comparing them with another very method. precise."

Scientists Alain Gibaud and Thomas Beuvier, regular users of the ESRF, have put Yuriy Chushkin and Federico Zontone, ESRF scientists, in contact with palaeontologists Luc Beaufort and Baptiste Suchéras-Marx and marine biologist Ian Probert. The coherent X-ray diffraction imaging technique on the ESRF ID10 line of radiation was used to generate extremely detailed information on the 3D structure (and thus the mass) of the individual hulls and coccoliths. of several species of coccolithophores.

The team was able to calibrate the optical microscopy method and discovered that each coccolith of the shell has different characteristics, even if all were created under the same environmental conditions. To explain the variations in size and mass of coccoliths within simple coccolithophores, they found that the mass of coccoliths is proportional to the size of the organic scale around which the nucleation of calcite takes place every 110 at 120 nm.

"The experiment at ESRF was difficult because the samples, five to seven microns, were almost too big to be studied.Through consistent diffraction imaging, we managed to obtain information in 3D and to reconstruct the individual calcite crystals of coccoliths. ", says Yuriy Chushkin, scientist at ESRF. "In fact, the larger samples scattered the beam so well that in one hour we got the full set of 3D data we needed," he concludes.

The next step for the team is to use the calculated three-dimensional images of these coccoliths to better understand how calcification is controlled by these extraordinary phytoplankton and the mechanical properties of these tiny but highly complex calcite structures.

More information:
T. Beuvier et al., X-ray nanotomography of coccolithophores reveals that the mass and number of coccolithic segments are correlated with the size of the grid. Nature Communications (2019). DOI: 10.1038 / s41467-019-08635-x