The United States will become a net exporter of crude

About 4,000 representatives of the global energy industry are meeting this week in Houston, where IHS Markit is holding its annual CERAWeek conference. CEOs of Chevron, BP, Hess, Occidental and others will be there. State Secretaries Mike Pompeo and Rick Perry are expected to speak, as will OPEC Secretary General Mohammed Barkindo.

The United States and other countries have recognized opposition leader Juan Guaido, who declared himself president of Venezuela six weeks ago. The country 's oil production is down and some forecasts would put it at 500,000 barrels a day by the end of the year.

"We are looking for a similar kind of [oil] market in 2018. A lot of volatility and an average that keeps us in a similar range of $ 70 a barrel. In this sense, the sanctions against two members of OPEC could potentially add to the uncertainty and volatility around this market, "said Pascual. 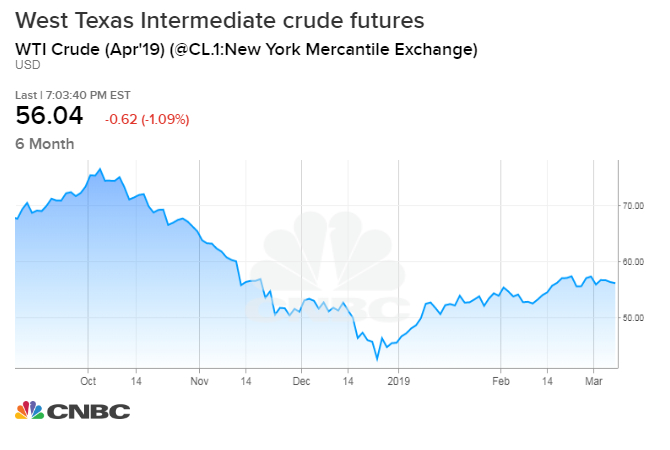 "Trump seems to have gained considerable influence over OPEC and the oil market has begun to fear its effect.Every time it will tweet its prices should not go up, the fear is that the Saudis are following and delivering, as they have already done.If the Saudis do not, the shale will be effective, "said Francisco Blanch, head of commodities and derivatives at Bank of America Merrill Lynch.

Chevron and Exxon announced last week a substantial increase in production in the Permian Basin. Exxon said in a statement that its production would be profitable in the Permian, even if oil prices fell to $ 35 per barrel. The breakeven point, or the point at which drilling costs of a barrel of oil are covered, has declined over the years for shale oil, and major oil companies have helped to reduce it even further, said John Kilduff of Again Capital.

"Saudi Arabia and Russia have a problem in hand," Kilduff said of shale production at major oil companies. "They run the risk of trying to micromanage the price and reduce it on both sides, instead of remaining stable.What happened to them in the fall, is that they went out thinking that there would be penalties, and that they increased their production to meet that. "

This plan is turned against him. "They were burned, then you asked the Saudis to go too far, reduce their exports to the United States and try to balance the market as quickly as possible. the possibility that the price increases more expensive American shale installed and produced, "said Kilduff.

Sanctions imposed on Iran and Venezuela removed some of the heavier crude oil used by US refineries on the Gulf Coast from the market. This results in larger price differentials, but Pascual said it could be temporary due to a new fuel requirement for the marine transportation sector, which uses a high sulfur fuel.

"I think it's a short-term story.Longer term history is that after the entry into force of the IMO regulations in January, which limits the level of fuel that can be used in ships, there will be a drop in demand for heavy crude.It's really a short-term problem, "said Pascual.

Blanch said the oil market could become more like natural gas, a market with abundant supply and prices less volatile than oil.

"I think that with time, volatility goes down and prices are at the marginal cost of production," he said. "The industry will have to decide if every marginal actor has the right to exist, and some of them will be eliminated." Consolidation is another likely trend … This is what will happen in the next few years , and the process you get ups and downs, you get Venezuelas and Irans ".