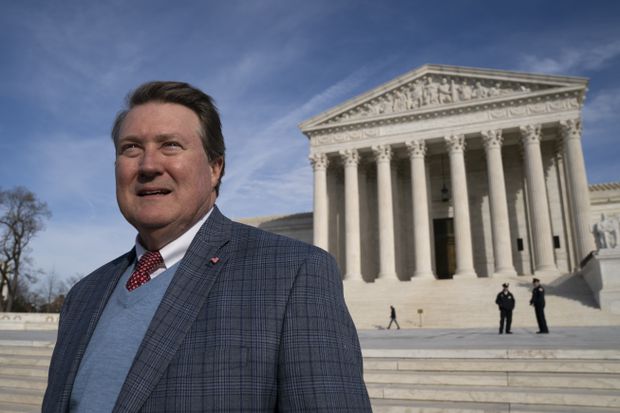 Mitch Hungerpiller thought he had a first-class solution for mail that is returned as undeliverable, a common problem for companies that send a lot of letters.

But the process he has helped to develop and create around his small Alabama technology company has resulted in a more than continuous conflict with the US Postal Service, which says his solution should not have been patentable . The David vs. Goliath dispute has now reached the Supreme Court. On Tuesday, judges will hear Hungerpiller's case, which involves analyzing the meaning of a 2011 patent law.

"All I want is a fair shake," said Hungerpiller, who lives in Birmingham and is the father of three children.

Hungerpiller, 56, began to think seriously about mail returned in 1999 while working as a computer consultant. During his visits to clients, he continued to see huge trays of returned mail. He read that every year, billions of mail items are returned undeliverable, thus costing time and money for businesses and the postal service.

So he decided to try to solve the problem. He developed a system that uses barcodes, scanning equipment and computer databases to process mail that is returned almost entirely automatically. His clients, from financial services companies to marketing companies, usually direct their returned mail to Hungerpiller's company, Return Mail Inc., for processing. Customers can get information on whether the mail has been correctly addressed and if there is a newer address.

Hungerpiller indicates that the development of the Return Mail system took several years. As part of this process, the company applied for a patent. In 2004, just before Thanksgiving, Hungerpiller received a call with good news. The company would be granted US Patent No. 6,826,548.

"Oh, I was really grateful … Best Thanksgiving of my life," he said, describing the phone call as "just a wow moment".

To celebrate, he bought decorative copies of the patent for business leaders. His copy, a paper-sized plaque, hangs in his desk next to a painting of his dead father.

"I was crushed, I have a dagger in the back," Hungerpiller said.

And his business has suffered.

"In the end, we had to lay off employees," said Hungerpiller, adding that it "stifled the company."

A spokesman for the postal service declined to comment on the case because it is underway.

Just as Hungerpiller thought his company could take over, the postal service changed tactics and successfully used a 2011 patent law review law to invalidate the Return Mail patent.

Hungerpiller said he was happy that the Supreme Court would at least hear his case. He said that what he had experienced so far did not make him lose confidence in his government. Most of the time, he wears an American flag pin, as he has done since 9/11. He is called a "proud American".

"It's only a process," he said. "I sincerely believe that one day I will get justice."