This glass cottage in Vermont is the dream of a skier 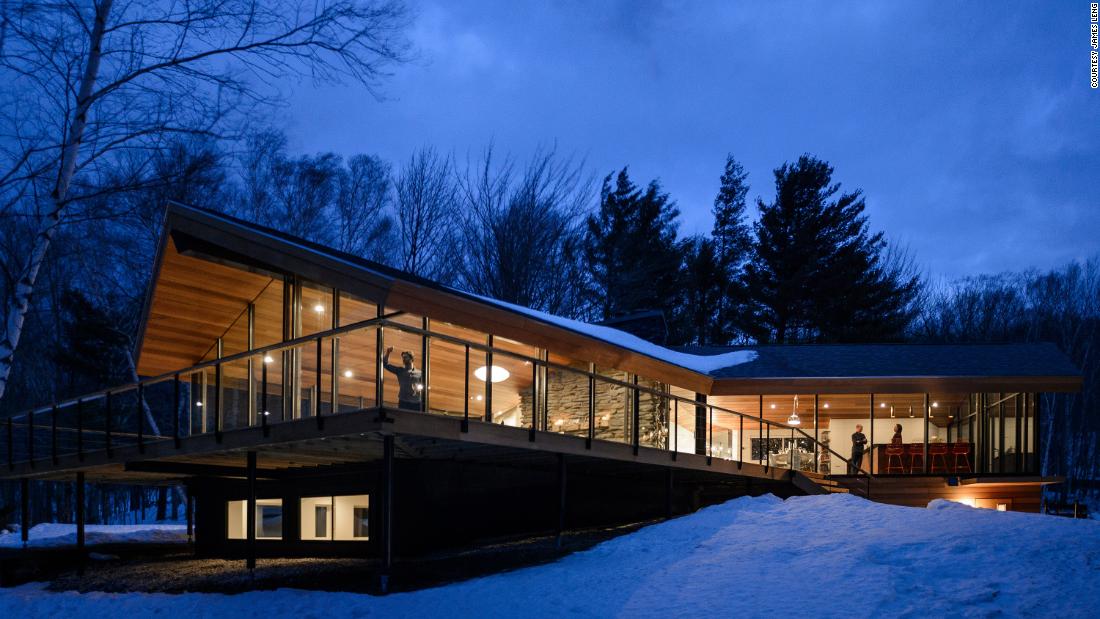 The architect Jeremy Jih set out to design a ski house that brings in the outside without the cold. Its modern glass-walled chalet in Stowe, Vermont, offers a cinematic view of the slopes and creates a clear, unobstructed and always pleasant space.

Jih's partner, Jeff Merselis, a senior executive in the Boston-based health sector, is the owner of the 5-bedroom, 5,000-square-foot ski house.

"Many traditional ski houses are like log cabins, with lots of dark wood and heavy furniture," says Merselis. "I wanted something a lot brighter, there is nothing inside the house that rivals the incredible view on the outside."

For Merselis, who bought the house for $ 420,000 and spent $ 1.2 million to rebuild it, the main goal was to make the house modern yet warm and keep the front and center view.

"We wanted it to be a beautiful modern cabin that would be this spectacular framed view of wood and stone," said Jih.

The couple, who started dating just before the house was bought by Merselis, focused on the outdoors and chose a well insulated and effective glass.

Jih designed the roof lines so that the overhanging eaves blocks direct sunlight in the summer, but in winter, when the sun is lower in the sky, the rays hit the black concrete floor directly. polished, warming it and allowing for more efficient passive heating. This is in addition to radiant floor heating.

"The first thing a lot of people assume is that the heating will be hot and expensive," said Jih, "but the heating bill amounts to about $ 300 a month for a 5,000 square foot home."

Merselis was looking for a ski home in the Stowe area for almost a decade.

The existing house that he bought – a 1978 house, described by Jih as "an Austrian cottage comes to the American suburbs" – was in poor condition. The pipes had burst, creating mold, among other things.

But there were possibilities. When Merselis came to examine him, he was delighted to find that the proliferation hindered what he knew to be an incredible view of Mount Mansfield, Vermont's highest mountain.

However, it is the bones of the house – and especially its stones – that have attracted Jih's attention. "I immediately told him that he had to buy this one," says Jih. "Mainly because of this magnificent three-sided blue stone fireplace on which we rebuilt the house."

The hearth, which measures 13 feet tall and 10 feet wide on each side, stayed and the house was rebuilt from the ground on the three-winged footprint. Six sides feature commercial grade double-insulated curtain glass in common areas. The other sides have large windows, with vertical aluminum louvers 1/8 "thick on the outside to ensure the privacy of the rooms.

Jih built around the home a clover or trefoil-shaped path, whose wings stretched to three different landscapes: protruding into the mountain, into an orchard and overlooking a swimming pool.

Informed by the use

Jih had skied exactly once when he had been commissioned to design the house. But Merselis was skiing before she could walk.

"I wanted it to be a ski resort that is not difficult, that can accommodate large groups of people, that requires very little maintenance, a place where skiers, dogs and muddy hiking boots are welcomed."

Having direct access from the garage to a ski locker was important because there are so many things you want to keep together and you do not want to hunt down snow and mud all over the house, says Merselis.

Jih has built five brass and sapele ski lockers with a boot room, a glove shelf, a coat hook, ski room and a top shelf for a hat or helmet.

They also intentionally placed a higher priority of space on the common spaces. "There are much larger public spaces in the house, which, in my opinion, is also important for a ski house so people can gather in the kitchen and living room, but have their private time in the rooms, which are usually much smaller. "

The sauna is one of the most remarkable elements of design. The glass-enclosed sauna offers views of a carved acrylic block engraved with a map of the ski slopes of Mount Mansfield. Each grid junction on the map also serves as an opening for storing a bottle of wine.

"The idea was that after your day of skiing, you wanted to warm up in the sauna, watch the slopes you just skied and choose a bottle of wine for dinner," Jih explains.