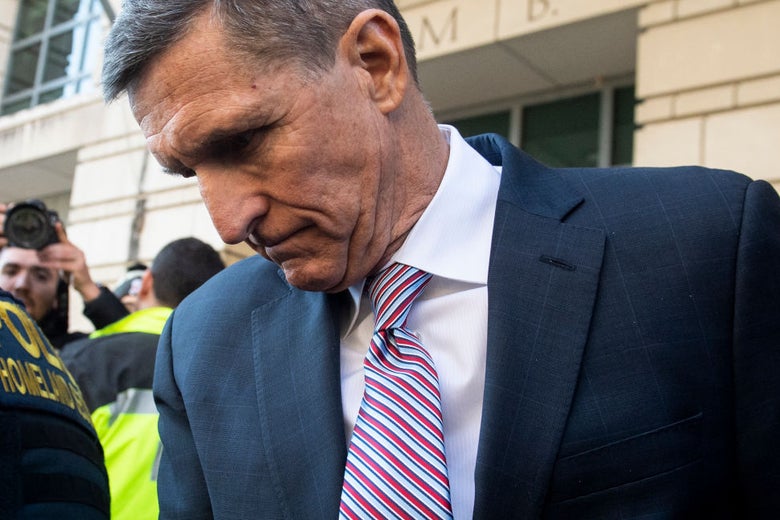 The New York Times on Tuesday published a feature article chronicling two years of Donald Trump 's obstructionist behavior towards the Department of Justice. Some elements seem rather incriminating, including the description of an incident not yet reported in which Trump would have tried to convince the American lawyer that he had appointed to head the Southern District of New York to recuse himself after an investigation conducted by lawyer Michael. Cohen in which the president was involved. Another important scene in history, however, is a description of the fallout from the resignation of National Security Advisor Michael Flynn. It's as if she included some sort of smoking gun … except that neither I nor apparently somebody else who has read the story can know exactly what part of it is supposed to be the smoke or the gun.

Here is the section involved:

It was Feb. 14, 2017 and Mr. Trump and his advisers were in the Oval Office to discuss how to explain the resignation of Michael T. Flynn, the National Security Advisor, the night before. Mr Flynn, who was one of Mr Trump's key campaign advisers, was under investigation by F.B.I. for his contacts with the Russians and his secret lobbying efforts for Turkey.

The Ministry of Justice had already told Mr Flynn that the Russians risked blackmail for misleading White House officials about Russia's contacts. In the White House, there was a palpable fear that the investigation on Russia could engulf the first few months of a new administration.

When a group from the Oval Office spoke, one of Mr. Trump's advisers mentioned in passing what the then President, Paul D. Ryan of Wisconsin, told reporters: Mr. Trump had asked Mr. Flynn to resign.

It was unclear exactly where Mr. Ryan got this information, but Mr. Trump was stubborn about what Mr. Ryan said. "It sounds better," said the president, according to people familiar with the discussions. Mr. Trump then turned to White House press secretary Sean Spicer, who was preparing to inform the media.

But was it true, Mr. Spicer hurry.

"Say I asked for his resignation," Trump repeated.

The President did not seem to worry about what he had said to the public about Mr. Flynn's departure and quickly became aware of this new story.

Incidentally, the idea that Sean Spicer would be worried about whether something was true before saying it on television seems far fetched, but maybe he had a weird day. The biggest problem, however, is the Times' implication that prior to the February 14 meeting, no one would be right to think that Flynn had been asked to resign – and that such a story might not be true.

One of the disturbing reasons is that the Times itself announced, a few hours after Flynn's resignation on the evening of February 13, that he had resigned because the White House had ordered him to do so. As a NewsDiffs archive site, an NYTimes.com article on Flynn was updated around 2 pm on February 14, that is. before The meeting was described in Tuesday's speech – to say that White House advisor Steve Bannon had asked Flynn to resign.

Mr. Trump … was more and more concerned about the continuing consequences of Mr. Flynn's behavior, according to people who knew his thoughts well, and he told his associates that the media storm around Mr. Flynn would undermine President's picture on national security issues.

Stephen K. Bannon, the chief strategist of the president, has called for the resignation of Mr. Flynn, a move he has been lobbying since Friday, when it became clear that the national security adviser had misled Mr. Pence.

This week's story in The Times therefore suggests that there was something sneaky and surprising in the fact that Trump said during the day of Feb. 14 that he had asked Flynn to resign – while the Times itself had reported pretty much this exact time earlier it's still on its website without any correction or qualification.

What makes the Times account even stranger is that it does not mention the more The less obvious aspect of the story of Flynn's resignation is that the White House claimed (early in the evening of February 13) that Flynn had withdrawn because he had been surprised by to lie to Vice President Mike Pence and other officials he had discussed US sanctions against Russia with the Russian Ambassador, Sergey Kislyak. Flynn had in fact discussed sanctions with Kislyak during a telephone conversation during the presidential transition period, which interim national security officials reported as suspects when they learned the discussion because they were intercepting Kislyak's communications. But, as the Times and others have pointed out, it turns out that many senior Trump advisers knew from the day of the conversation between Flynn and Kislyak that they had spoken of sanctions. This undermines the White House's stance that Flynn was hunted for concealing the conversation and suggests that he may have been raised to defender in an (unsuccessful) effort to prevent investigators and journalists from Try to determine if the contact with Kislyak was part of a larger counterpart related to the sanctions between Trump and Russia.

In other words, Trump seems to have promoted a misleading narrative about Flynn's departure from the White House – but not with the one who specifically asked him to resign, and who is not mentioned at all in today 's big deal. on the ways in which Trump undermined Russia's investigation.

So what's going on? What does all this mean? Well, I have no idea! I asked the Times reporters who wrote the story for clarification, but they did not answer. And if you can find out for yourself, I am on Twitter.