Top House Dem says Cohen is likely to face a perjury investigation by the DOJ; admits that block Fox News from the primary debates "do not help" 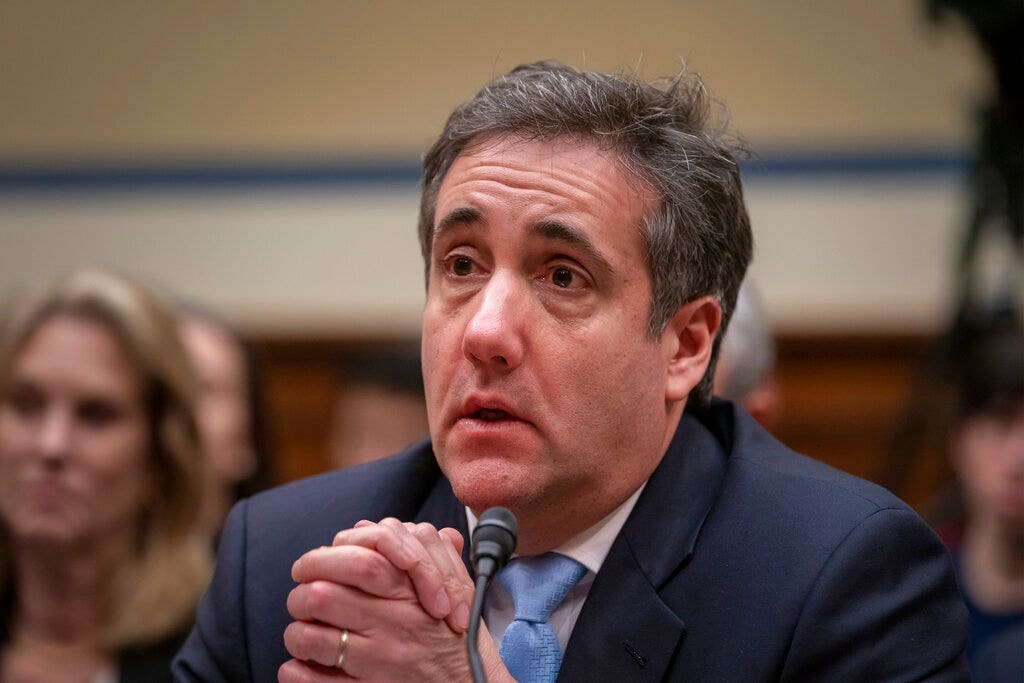 A member of the House of Democrats' parliamentary oversight committee told Fox News Sunday that she thought the committee chairman, the commission's representative, Elijah Cummings, "would end up sending back". Trump's former lawyer, Michael Cohen before the Justice Department for a perjury investigation, after many contradictions. and inconsistencies appeared in his spectacular public testimony at the end of last month.

Representative Katie Hill, D-Calif., Who also serves as a liaison with Democratic leaders, also accused the Democratic National Committee (DNC) of making a mistake in preventing Fox News from holding primary Democratic debates, saying that this decision was wrong. nothing to "help" growing partisan tensions.

Fox News reported on Friday, citing two sources familiar with the matter, that Cohen had met Adam Schiff's staff, D-Calif., More than 10 hours before his testimony. In addition to his public remarks, Mr. Cohen met with the House committee several times in camera.

Although she has apparently acknowledged that the Democrats "can not go anywhere" to dismiss President Trump for the moment, Hill said Cummings had enough reason to request another criminal investigation into Cohen, who has already pleaded guilty to 39 to have lied to Congress in 2017. regarding the length of negotiations for the construction of a Trump tower in Moscow.

SCHIFF'S STAFF HAS GOED TO NEW YORK FOUR TIMES WHEN HE MEETS COHEN OVER 10 HOURS – FOR A TESTIMONY DURING ONLY 7 HOURS, SAY SOURCES. Was he COACHED?

"I do not know whether he lied or not," Hill said. "I think that's the case, President Cummings is incredibly deliberate.I know that he's reviewing the entire testimony, all transcripts with [GOP ranking member Rep. Jim Jordan] who will also make sure that we get to the bottom of this. "

Among the main areas of interest: Cohen's lawyer, Lanny Davis, appears to contradict his claims under oath never to have asked the White House for forgiveness.

On Friday, President Trump blasted Cohen, confirming that he had rejected his request for pardon.

Hill told Wallace that she was not sure how "that had happened exactly", but suggested that Cohen was "panicked".

"I imagine that in the panic that prevailed when you are about to come down [on criminal charges]Okay, you'll say, "Yeah, find out what you can do," Hill said. "And I imagine that President Cummings will eventually fire him, that's just what I suppose."

Cummings said on Thursday that he "had to make sure" that Cohen's statements were "real inconsistencies and not false lies," and asserted that he had personally told Cohen that he was "out of control." he would "nail you with the cross" he had still lied to Congress. "And I meant that," said Cummings.

Referring to these comments, Hill tells Wallace: "When [Cummings] say something like, "I'll nail you to the cross," he means it. I saw it in action. He will not let that happen. "

And Cohen was also examined in many ways – including CNN and the Trump government – for asserting under oath that he had not looked for a job at the Trump White House. Davis later admitted that Cohen was already considering working at the White House.

Cohen is expected to be in jail in May, although his sentence remains to be determined. Some Republicans accused Cohen of seeking to win the favor of prosecutors with his testimony.

Nevertheless, despite the debate over Cohen's truthfulness, Hill said, the Trump government is still responsible – even though it may lack criminal guilt.

"I really think it's a matter of shedding light on the truth, showing it to the American people, and then we're going from there, but at the end of the day, if – if people – you know, United Kingdom citizens, do not believe that it has reached this level, so we can not go anywhere, "said Hill. "So, in fact, it's about revealing the truth and getting to the bottom of things and asking the following questions:" Is this the kind of government we want, is it the kind leadership we want to see? the kind of state in which we want to leave our democracy to our children? And for the moment, I do not think that's the case. "

Hill then hinted that the media climate had become "more and more partisan" after his main presenter, Chris Wallace, insisted on his response to the decision of DNC President Tom Perez to ban Fox News to organize Democratic primary debates. Perez said Fox News would not be a "fair and neutral" forum for candidates, citing disputed allegations in a recent article in the New Yorker.

"I think it's the Democratic primary and we know there's basically no Democrat who's watching Fox News, so for me it's pretty fair," she began, though she was not sure. she later acknowledged that "certainly the Independents" would be potential spectators of debates.

"I'm here because I represent a purple district," Hill told Wallace. "You know, I think there is a lack of partiality and I hope we can change that, I have the impression that you treat me without partiality and I l? and I think it's something we need to change Personally, I do not think it helps when we say we're not going to have a debate on Fox News. "

Hill added, "I do not know to what extent the candidates have motivated this, but to what extent did the party motivate them, I would like to see all these changes." I wish the media become as unbiased as possible, but you know, I do not know if we are in this state yet, which is really unfortunate. "

Former DNC chairman Ed Rendell told Fox News Thursday that the decision was a serious strategic mistake by the Democrats.

"If we could pick the commentators and moderators, I think we should have the debate on Fox, because I'll tell you that even if we can persuade 3% of Fox viewers, 3% last time, is in Michigan, "Rendell, who chaired the DNC in the 2000 election, said in an interview. "I was the president of the DNC, I would say," Give me Bret Baier, Chris Wallace and Juan Williams, and you can have this Fox debate anywhere, anytime, anytime. "

Chris Wallace and Brooke Singman of Fox News contributed to this report.