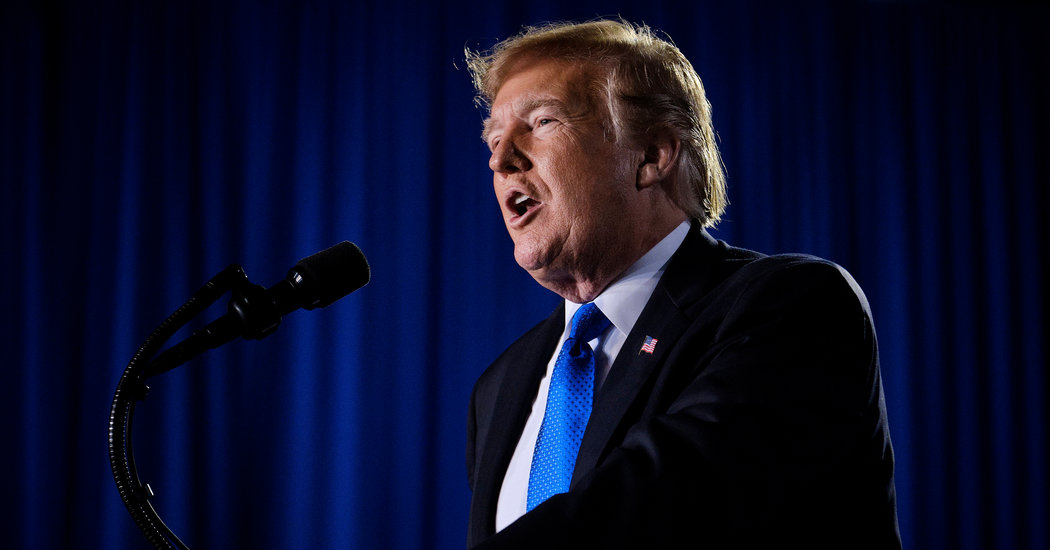 Even to his standards, President Trump's harsh attacks on this week's press stand out.

He has lodged a defamation suit against the Washington Post, called "punishment"Against NBC for having satirized on" Saturday Night Live "and, Wednesday, published his most harsh words against the New York Times, call the newspaper "A real enemy of the people!"

Previously, the first amendment researchers were surprised by the words of Judge Clarence Thomas, who on Tuesday urged the Supreme Court to lift the longstanding protections against defamation of US media. And the global crackdown on journalists continues, as Egyptian authorities arrested and deported a Times reporter on Monday who was trying to enter their country.

They have added a few difficult days to press freedom, an American concept once sacrosanct and assaulted since Trump denounced journalists fiercely – and the rallying cry "False news! his campaign and his presidency.

In a series of Twitter postings on Wednesday, Mr. Trump wrote"The press has never been so dishonest as today. Stories are written that have absolutely no basis in fact. The authors do not even call to ask for an audit. They are totally out of control. He then wrote, "The New York Times reports are wrong. "

Although the president has not cited any specific article, The Times on Tuesday released an investigative report outlining Trump's efforts to influence and undermine federal investigations of him, his presidential campaign and his administration. The Times Wednesday defended the article as "rigorously reported", based on a review of the confidential documents of the White House and dozens of interviews.

Mr. Trump's use of the phrase "enemy of the people" – which he frequently used against a mainstream media group, but rarely against the Times individually – also had an unusual weight because of a series of recent conversations between him and AG Sulzberger, The Times editor.

On two occasions, including an Oval Office interview last month, Sulzberger urged Trump in person to give up his use of the term. The publisher cited increasing evidence that Trump's anti-press statements encouraged autocrats and other world leaders to crack down, sometimes violently, on independent journalists in their own country.

In the interview, Mr. Trump responded by saying "I want to be" a defender of the press. But he complained at length that he regarded it as an unfairly critical cover for him and his administration.

In a statement on Wednesday, Mr Sulzberger again urged Mr Trump to take into account the remarks made by former presidents who, who have gone through times and historic parties, understood the importance of a free press.

"By demonizing the free press as an enemy, simply to fulfill its role of asking tough questions and uncovering uncomfortable information, President Trump is stepping down from a standstill. distinctly American principle, "said Sulzberger. "It is a principle that the previous occupants of the Oval Office have fiercely defended, regardless of their politics, party membership, or complaints about how they were covered."

The publisher added: "As I have said time and time again to President Trump, there is growing evidence that this inflammatory rhetoric encourages threats and violence against journalists at home. and abroad ".

While foreign journalists have faced the worst consequences of recent crackdowns – including arrests, imprisonment and, in some cases, violence and death – the Times has felt some of the effects this week.

A longtime journalist, David D. Kirkpatrick, Egyptian officials held him without food or water for hours after arriving Monday in Cairo. He was finally refused and forced to take a flight back to London.

The Egyptian leader, President Abdel Fattah el-Sissi, has stepped up his efforts to crack down on the media in his country, where dozens of journalists have been jailed or forced into exile.

On the national front, American press advocates were alarmed by Judge Thomas's argument that public figures should have more freedom to sue publications that they find unattractive or unjust. In comments published on Tuesday, Judge Thomas wrote that the 1964 New York Times case c. Sullivan, a reference in the field of modern American press rights, needed to be re-examined.

Judge Thomas, who wrote for himself, made his remarks in a concurring opinion in a case involving a woman who had accused the comedian Bill Cosby of sexual assault. His remarks recalled a memorable commitment to the Trump campaign – "Open the Laws of Defamation" – and came a few weeks after the President met the judge's wife, Ginni Thomas, at a private meeting to the White House.

[[[[In Mr. Trump's two-year war on the investigations surrounding him.]

As for Mr. Trump, his anti-newspaper animosity this week is not limited to the Times. In another tweet On Wednesday, he spoke of a new defamation suit against the Washington Post, along with the plaintiffs – the family of Nick Sandmann, a student at Covington Catholic High School in Kentucky who had a meeting in Washington last month with a Native American which has become viral on social media.

According to the lawsuit, The Post "harassed" Sandmann because he was a "white, Catholic student wearing a Make America Great Again Memorial Cap." The Sandmann are claiming $ 250 million in damages.

"Go get them Nick. Fake News! "Wrote Mr. Trump. A spokeswoman for the Post said the newspaper was reviewing the lawsuit, "and we plan to defend ourselves vigorously."

Mr. Trump periodically repeated the phrase "enemy of the people" during intense criticism.

And he was wrong to suggest that the Times reporters who recounted his attempts to interfere in investigations had failed to obtain comment.

A Times reporter contacted the White House about the article Friday, a few days before it was released. The newspaper continued to lobby for comments over the next few days, including the day the article was posted.