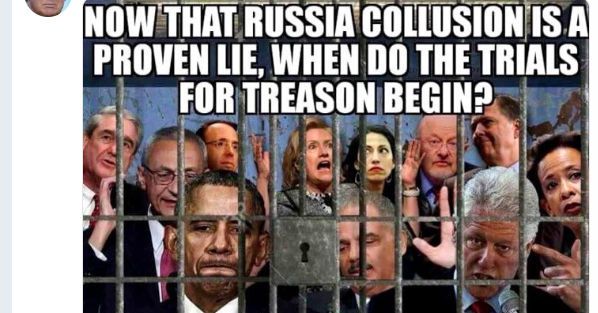 President Donald Trump Wednesday morning, retweeted a same appellant to the imprisonment of a number of prominent Democrats and law enforcement officials and intelligence.

Rosenstein continues to be the attorney general chosen by Trump. Trump seems to agree with the idea of ​​locking him up anyway.

A number of officials represented in the meme received bombs by mail about a month ago by a Trump fan called Cesar Sayoc. Sayoc's van was adorned with a number of right memes that were no different from the one Trump had retweeted.

A few minutes before retweeting the same and a number of others wildly inaccurate tweets from the Twitter account "The Trump Train", the president has posted a tweet accusing unjustified the special advocate Mueller of having "cruelly incited the witnesses to lie about facts" in exchange for a " relief".

While Fake News, disgusting, is doing everything in its power not to point this out, at least three major players have suggested that the Angry Mueller group in Dems incites witnesses to lie about facts and that they will get relief. That's our Joseph McCarthy era!

Trump's anger over Mueller appeared to intensify after special advocate's announcement Monday that former Trump campaign chairman Paul Manafort had violated his cooperation agreement with the lawyer special in lying to the investigators.