Trump says Rod Rosenstein should be in jail after an investigation by a special lawyer. 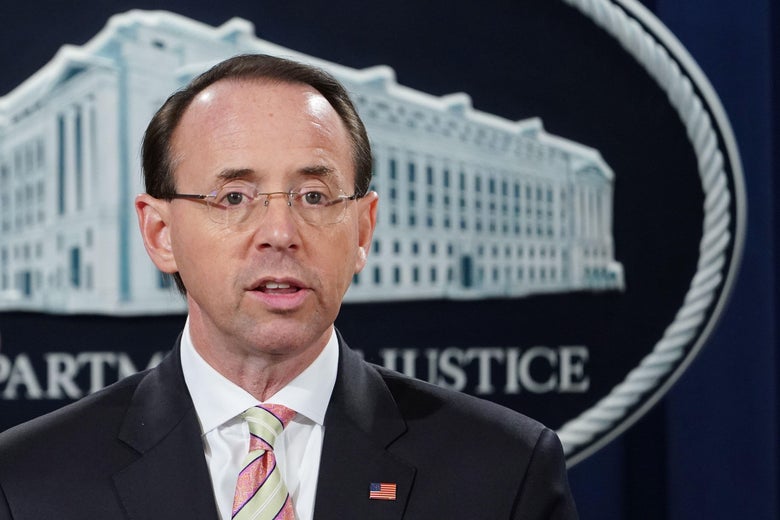 On Wednesday morning, President Donald Trump retweeted a fan account report describing Barack Obama, Bill and Hillary Clinton, as well as various other political opponents behind bars. The caption read: "Now that collusion in Russia is a proven lie, when are treason trials starting?"

The reporters pointed out that it was extremely unusual for a president to blame his predecessor and former rival for treason. A New York Post reporter questioned the president on a different and less visible face in the jailed crowd. Hidden in the back, behind Obama and John Podesta, was the face of Deputy Attorney General Rod Rosenstein.

In an interview with the Post, Trump was asked about Rosenstein's inclusion: "Why do you think he has his place behind bars?"

"He should never have chosen a special advocate," Trump replied.

Rosenstein nominated Robert Mueller in May 2017 after Jeff Sessions, then Attorney General, recused himself from the investigation into Russia's interference in the 2016 election. Trump's East repeatedly and regularly complained about the investigation of the special council, complaining of bias and accusing the investigators of being criminals. Thursday morning, he has again ramp against the "witch hunt"

Trump did not hide his animosity towards Sessions and Rosenstein, whom he blamed for the investigation and his survival until late in his presidency. Trump shot sessions earlier this month. Rosenstein offered his resignation in September, following reports that he allegedly invoked the 25th Amendment process to revoke the president and the idea of ​​secretly registering the president. (Rosenstein denied the information and said that he was talking sarcastically.) Trump did not accept this resignation and when the Post asked him if he intended to send back Rosenstein, the president refused to answer.