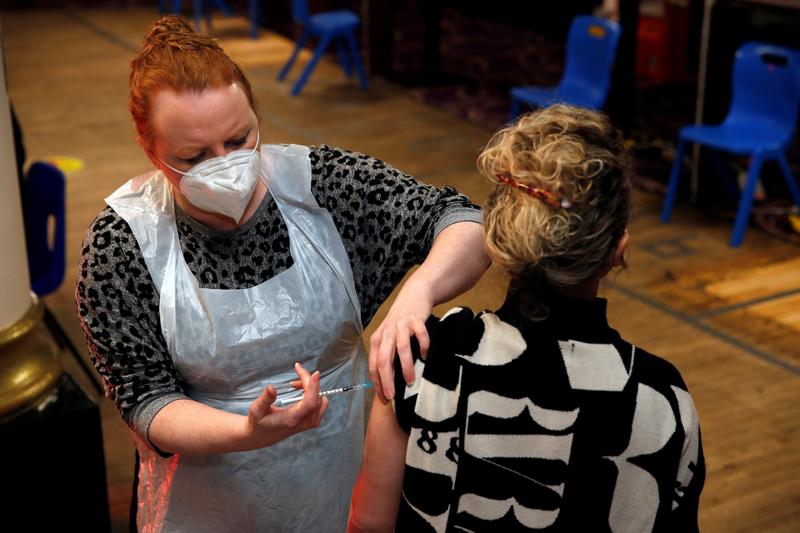 LONDON (Reuters) – Britain is on track to vaccinate its most vulnerable people against COVID-19 by mid-February and offer an injection to every adult by the fall, with some 2 million people who have already received a first dose, said its secretary of health. on Sunday.

“In the last week we have vaccinated more people than in the whole month of December, so we are accelerating the deployment,” Matt Hancock told BBC TV.

Britain is fighting the spike in infections, but is pinning its hopes on a rapid vaccination to get life back to some degree of normalcy by spring.

Hancock said about 2 million people have already received a first injection of the Pfizer-BioNTech or Oxford-AstraZeneca vaccine.

“We have now vaccinated about a third of all over 80s, so (we’re) making very, very good progress,” he said.

For the government to meet its goal of vaccinating more than 14 million people by mid-February, including those over 70, clinically vulnerable people – the elderly or those with pre-existing illnesses – and health workers health and social services, he owes 2 million strokes per week.

Seven mass vaccination centers will open this week, supplementing nearly 1,000 medical practices and hospitals offering injections. Hancock said every adult will be offered a vaccine by the fall.

Queen Elizabeth and her husband Philip, both 90, have been vaccinated, Buckingham Palace said on Saturday.

A new, highly transmissible variant of the virus is emerging in Britain and Prime Minister Boris Johnson has imposed a third national lockdown in England in an attempt to stem the pandemic before the most vulnerable are vaccinated. Wales, Scotland and Northern Ireland have imposed similar measures.

More than 80,000 people in Britain have died within 28 days of receiving a positive COVID-19 test, the fifth highest official toll in the world, and more than 3 million people have tested positive.

England’s chief medical officer Chris Whitty said on Sunday that the national health service in parts of the country was facing “the most difficult situation one can remember”.

Hancock did not rule out a stricter lockdown, saying he would “not speculate” on new restrictions, while adding that the “vast majority” of people abide by the current rules.