Video: A soldier unsheaths a gun at a roadside check 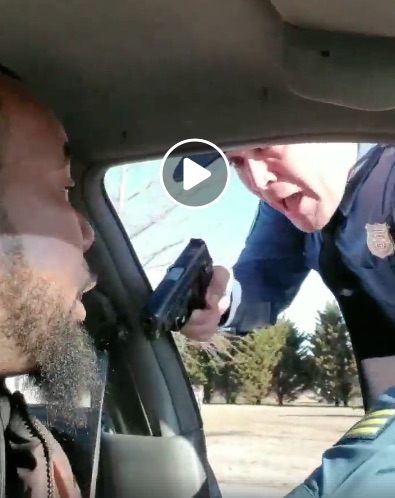 The Delaware State Police announced that it was investigating after the broadcast of a video on February 14 showing an officer who was directing a gun at a man during a roadside check at Slaughter Neck.

Bratz has refused to identify the agent, and it is not certain that the agent is on leave with pay. He added that the soldier was on patrol around 9 am in a well-identified patrol vehicle in the vicinity of Fleatown Road and Cubbage Pond Road when he saw a silver Mazda pass at high speed in the opposite direction.

Mack Buckley said that he was driving to his mother's house when an officer brought him.

"I was trying to figure out why he called me," Buckley said, adding that the officer had not explained to him why he had arrested her and was not asking for a driver's 39, registration or auto insurance.

The video shows Buckley placing his cell phone camera on the dashboard of the vehicle while an officer approaches the driver's side window. Buckley stated that he had installed his camera after the officer stopped him but did not ask him for any information, did not explain to him why he had stopped him then returned to his police vehicle.

"This shot at home. Just around the corner from my mother's house, I could have lost my life, "he said. "He put the gun on my chest. At that moment, I thought I was done. I expected the pop. "

Bratz did not answer questions about police policy and whether the soldier had acted in accordance with the policy.

Buckley was arrested and taken to Troop 7, where he was charged with resistance to arrest, driving without insurance, driving an unregistered vehicle and driving at high speed.

Buckley said that he had auto insurance and that the registration was up to date, but that the agent had never asked for this information. Buckley was released on an unsecured bail of $ 1,100, pending his court appearance on March 18 in the Sussex County Court.

During the police raid on Troop 7, Buckley said the officer told him, "You should not interrogate the police."

Buckley said he had done nothing wrong and that he was considering filing a complaint.

"I just refused the man the answers he wanted, because he'd refused me the answers I wanted," he said.